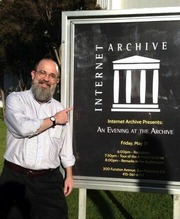 John is an IT consultant, digital media archivist and data steward from Eureka, CA associated with Access Humboldt.
He founded the Community Media Archive in 2009, in partnership with the Internet Archive and Access Humboldt, as a place where Public, Educational, and Government access (PEG) TV stations and Community Media Centers can archive and share their video programs. It has grown to encompass 1,700,000 videos from 1,500 access centers and government entities from around the USA, Canada, and the United Kingdom.
As part of his Youtube -> Archive project, he has added more than 1,600,000 videos and associated metadata from access centers' Youtube & Vimeo channels to the Community Media Archive, preserving the outreach to and engagement of community members through communication methods beyond the traditional PEG (Public, Education, Government) cable TV channels.
For videos archived from YouTube channels, English and Spanish captions auto-generated by YouTube are added to videos in the Archive.
Communities with significant numbers of non-English speaking residents can request the download of Youtube auto-generated captions in 124 other languages.
John has worked with various local communities to provide Youtube auto-generated captions for videos in Arabic, Dutch, Farsi, French, Gaelic, German, Hawaiian, Hmong, Japanese, Korean, Kurdish, Lao, Mandarin, Nepali, Punjabi, Portuguese, Russian, Somali, Tagalog, Urdu and Vietnamese languages in addition to English and Spanish.
He has spoken at ten ACM National and twenty ACM Regional conferences about the Community Media Archive, archiving and metadata and helped many access centers understand how to work effectively with the Internet Archive.
He maintains the Community Media Archive wiki which serves as his "brain dump" about the project...
He also plays with small single board computers such as the Raspberry Pi and Odroid and likes to build HiDefinition music players and Roon endpoints based on them...