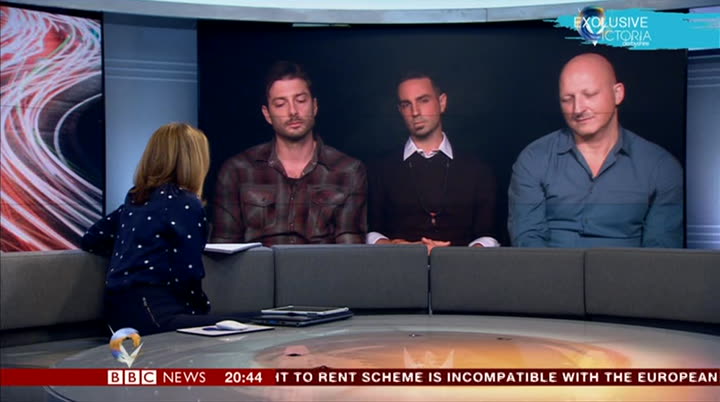 this is bbc world news today. our top stories... your mum's trusted him, broadly speaking your families trusted him. the indian pilot shot your mum's let you sleep down and captured by pakistan is released — in michaeljackson's bed with him. but will his safe return ease sometimes when your mum was sleeping next door. the tensions between the two nuclear neigbours over kashmir? can you describe how michaeljackson the us offers a bounty of one million dollars for information about the son got them to trust him like that? of the late al-qaeda leader osma bin laden — saying he's a key figure michael, you know, there in the islamist militant group. is a long grooming process, after months of checks and preparations on this robotic probe — where michael you know inserts scientists finally begin the first ever exploration below himself into your family and becomes the surface of mars. a part of your family, and you know, he grooms the children, and he grooms the parents as well. so, you know, it's a meticulous sort of build—up for him hello and welcome to be able to do that, to world news today. and it takes him a while to build the trust, it doesn't happen overnight. so, you know, not, not letting our parents off, or saying that it's not their fault,
8:46 pm 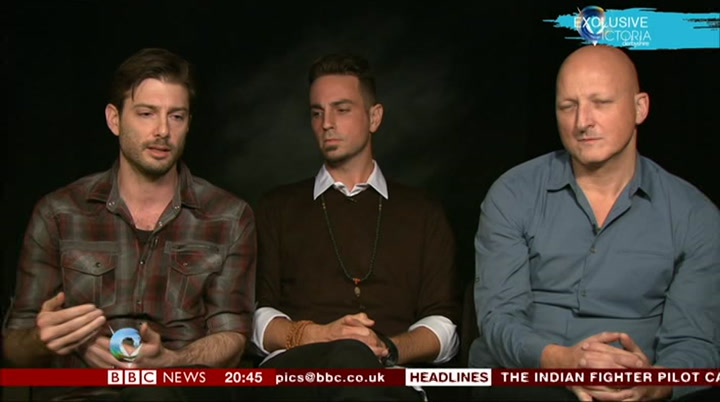 but i think people need to understand that this just doesn't happen right away. you know, the parents, and he's also a major star, they know him already as well. so there are years of them feeling comfortable with this star they have seen on tv. it's also kind of shows how you know, michael groomed the world as well. i think most of the time, the sexual abuser is not the scary guy in the van in the alleyway, of course that happens sometimes, but i think it's the minority of the case. most of the time it's the coach, the teacher, the uncle, the stepfather, the father, the mother, whoever, somebody who is absolutely trusted. or who has gained trust of the child first and foremost, and the whole family, and this was the case. michael made sure from day one that he had, of course, a very special relationship with me,
8:47 pm 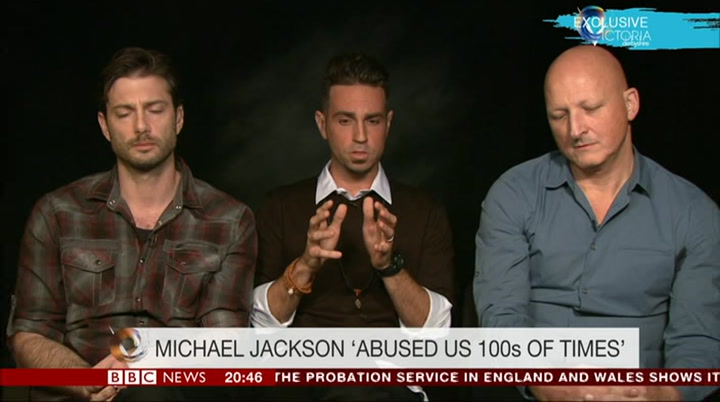 and then he made sure he had a really special separate relationship with my mother, and with my sister, and not my father. right from day one in an unnoticeable at the time way, he started driving this wedge between myself and my father, my mother and my father, so that it was just he was a master manipulator. yeah i agree, it doesn't let my mother off the hook, my gosh, i wish. especially as a parent now, and of course because of what i've been through, i can't imagine all of the red flags not going off for me, i may not ever let my son, of course now, because i have been through this ever sleep in any other person's bed that i know even. yeah, she was also absolutely groomed and manipulated by michael.
8:48 pm 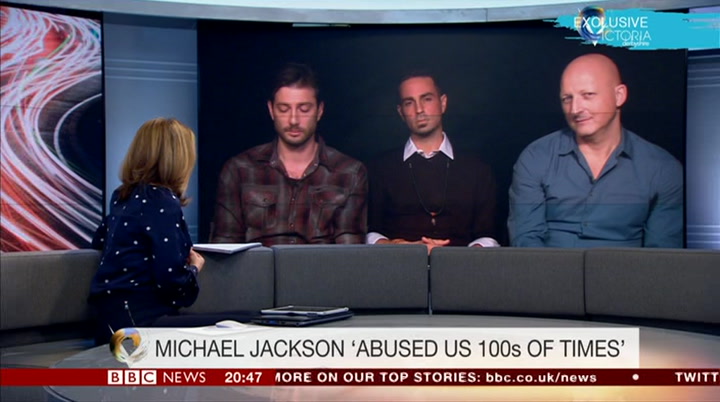 you use the phrase, that's not to let her off the hook, and in the film you say you don't really have any feelings for your mum now. do you believe she bears partial responsibility for what you say happen to you? yeah, absolutely there is. there is absolutely responsibility at my mother's door. there's no denying that. you know, my relationship with my mother, thankfully is continuing to evolve, and we have been going through a lot of healing together, and a lot of honesty, and a lot of hard stuff. so that relationship is getting better every day. but there is responsability at my mother's door, there is response ability first and foremost at michael's door. the door of all the other people, all the other employees that were around michael and me and james, all the time. that looked the other way.
8:49 pm 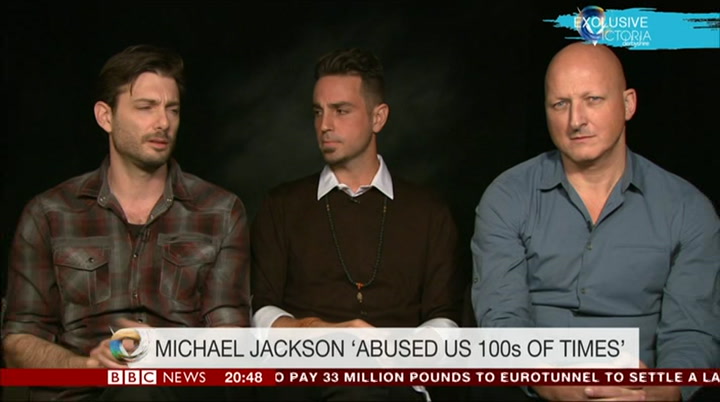 i think to speak to that too, you can correct me if i'm wrong, but you know michael, he does, he makes a wedge between you and your parents, and he isolates you from everybody else, and so, and then at the same time when you're being abused, part of you was dying. so you're not connecting with your mum is all of that sort of working together, so it's not like, it's not that you are blaming them, that's why you're disconnected, it's all of those, it's all of those different ingredients working together sort of pulling you away from the world, disconnect you from your parents, and you're starting to die. emotionally. so i think all that goes with it. one of the most poignant lines in the film is when wade tells his mother about the abuse, you know two decades later,
8:50 pm 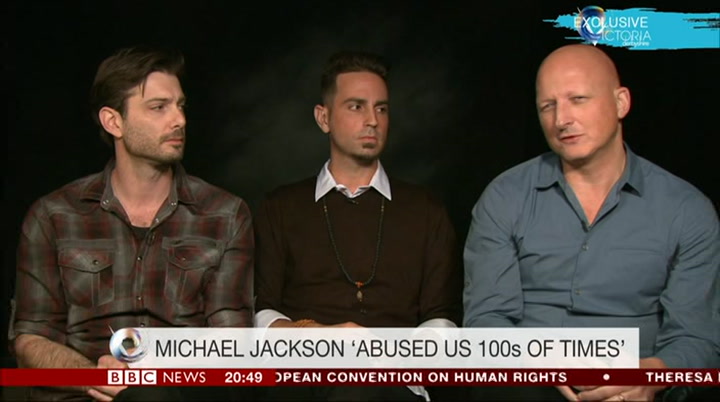 and she turns to him and she's in tears and she says how could you not have told me? and that is one of the most tragic lines in the film, because joy, wade's mama, trusted her son, because she had a very close relationship. to tell her if anything was wrong, and what the predator does is inserts himself into the relationship as a sort of parent figure, as a mental, and creates a deep attachment with the abuse victim, and that is what people don't understand. you know that the jackson estate have put out a statement in response to your film, denying your claims. i will read it in full. michaeljackson is our brother and our son, we are furious that the media, who without a shred of proof or single piece of physical evidence chose to believe the word of tubac admitted liars over the word of hundreds of family and friends around the world who spent time with michael. many at neverland, and experienced his legendary kindness and quibble generosity. we are proud of what
8:51 pm 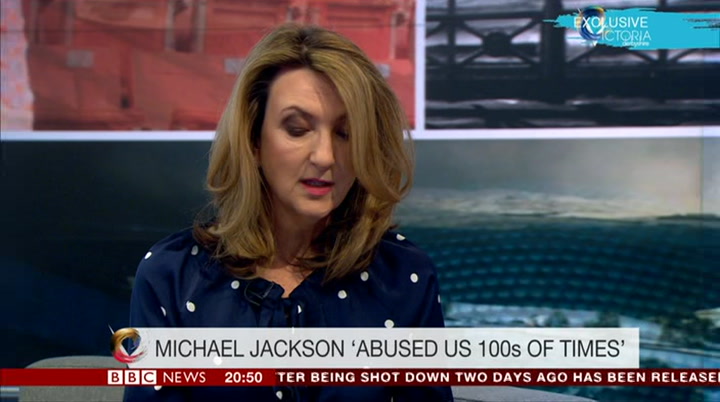 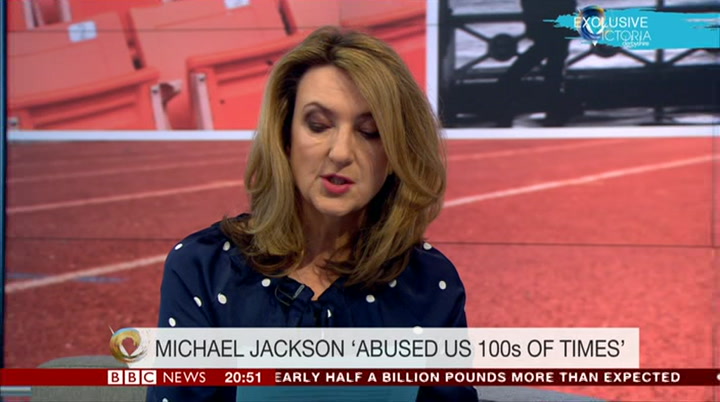 stories. the truth is on our side. go do your research about these opportunists, the facts don't lie, people do. michaeljackson was and a lwa ys people do. michaeljackson was and always will be 100% innocent of these false allegations. wade, you defended michaeljackson twice in 1993, when you were 11, and then again in courts in 2005 when he was acquitted of sexual abuse charges. why did you tell the world than that he had done nothing to you? so from day one of michael sexually abusing me, he immediately started to tell me and train me on how to lie about what was happening between us. lie about what was happening between us. first, he would tell me that what this is, this sexual activity is because he and i love each other, and this is how we show our love.
8:53 pm 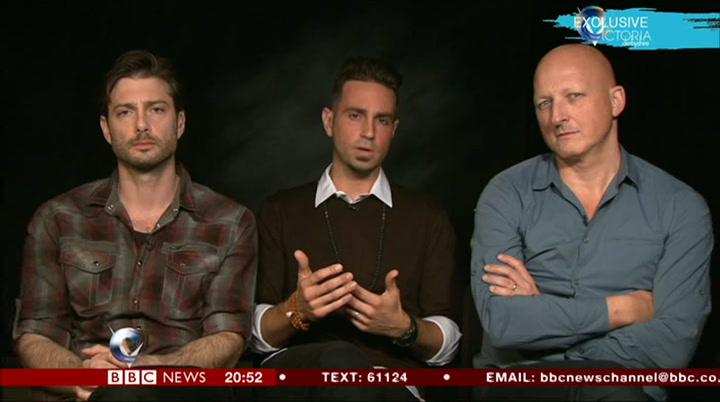 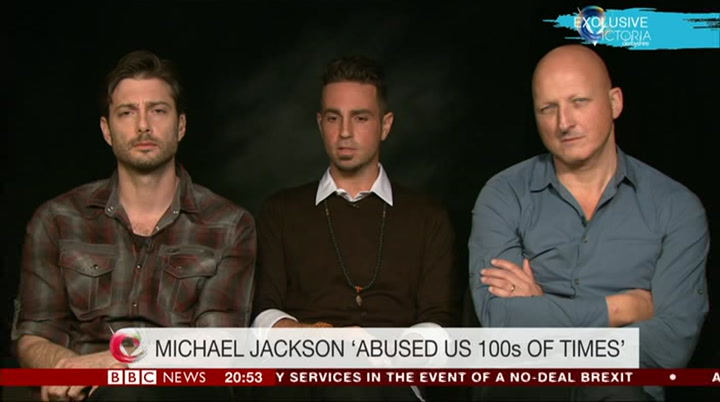 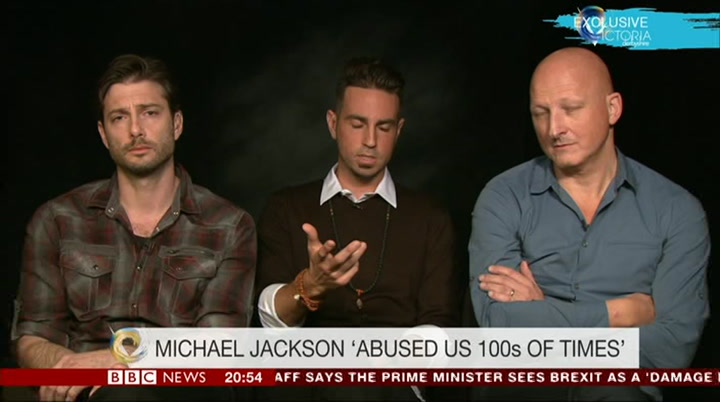 the second case, the criminal trial in 2005 -- the second case, the criminal trial in 2005 —— trial, was a similar thing, i was terrified at the idea of people finding out what happened between michael and i, because michael always made me feel that i was complicit in it, that i wanted it just as was complicit in it, that i wanted itjust as much, if not more than him. so the idea of people finding this out, i was about to get married at the time, the idea of my wayfinding outcome i thought, i guess i was a freak too if that's what people thought michael was, than i would be a freak too, so maybe my wife would leave me, my career would fall apart, my life would fall apart. also, i still loved michael, and i was still ready to do anything i could to protect him. what hasn't been like for both of you to talk to each other, to connect with each other? when it premiered at sundance, we finally got to spend some you know,
8:56 pm 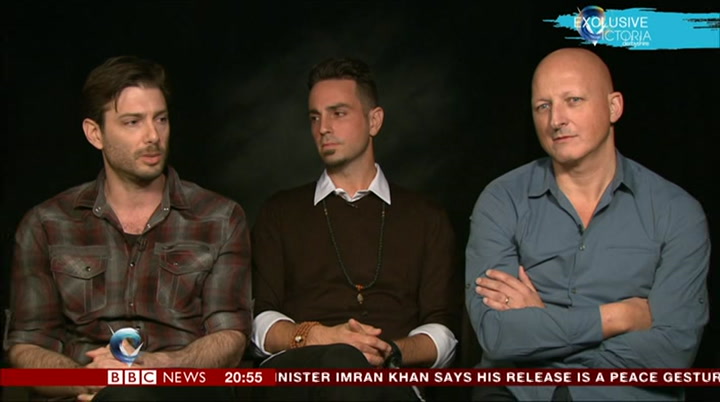 sometime together, and connect, and it's indescribable. it's just sometime together, and connect, and it's indescribable. it'sjust like you're alone, and then you're not alone. you know? to finally, after you know whatever it's been, six years or so since we started this process with the case, to finally be able to talk, to be together for any length of time, there's just an unspoken leg, technically we don't know each other that well. we have not been around each other that much in our lives at all. but it's like i know you. deeper than a know anybody else in my life. because of what we share. what we unfortunately share, and also, what we share in healing, and beginning the healing process. writes, we understand what we are going through along the process. thank you all of you very much for talking to us, think of gentleman. and for talking to our audience, we really appreciate it. thank you. thank you.
8:57 pm 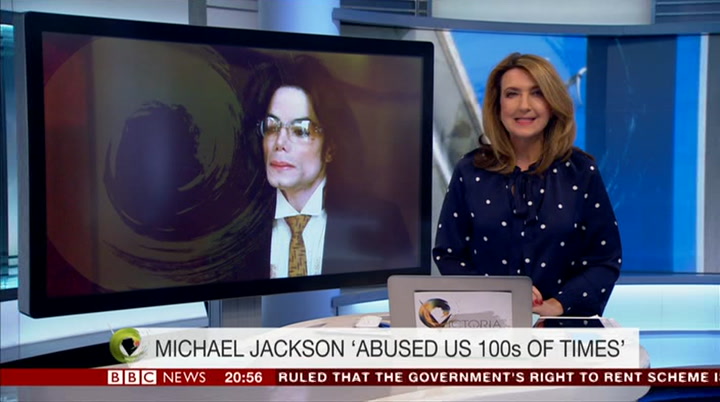 that was victoria derbyshire talking to wade robson and james safechuck you can read more on that story, you can call for free at any time, to hear recorded information, that is the number on the screen. victoria derbyshire there talking to wade robinson, the leaving neverland documentary maker dan reid, and if you missed those numbers, or you wa nt to you missed those numbers, or you want to read more on the story, do head online, lots of other stories to read and catch up on bbc.co.uk/news now it's time for a look at the weather with stav danaos after a quiet start to this week things are set to turn very u nsettled things are set to turn very unsettled this week, with spells of wind and rain, and even a main storm
8:58 pm 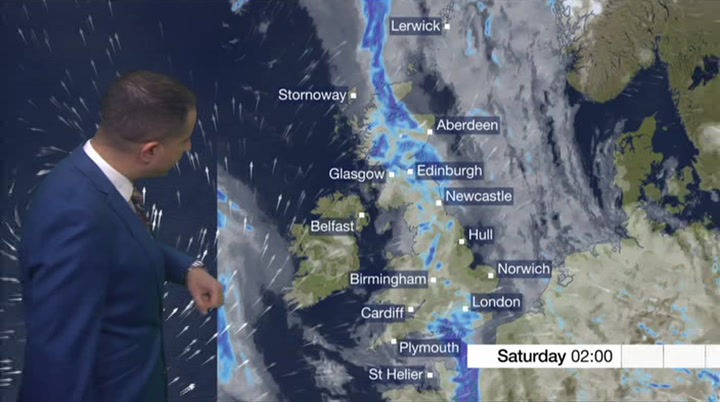 on sunday. and of rain spreading across the country tonight, it will use down as it reaches eastern parts of the uk, behind it, something a little bit clearer and drier. because there will be quite a bit of cloud cover, it should be another mild night, with a fairly mild start to saturday. into the weekend event, spells of wind and rain, both saturday and on sunday, we have got a main storm which is likely to bring the potential of some disruption to england and wales. on saturday, this first storm will arrive across the northwest corner of the country, as the day wears on. we start off on if i know with plenty of sunshine around, the winds will increase, the clouds will increase from the west, as this deep area of low pressure arrives and heavy rain reaching northern ireland and then into western scotland and western england and into wales. it wont arrive across the east until after dark. that's a 50—60 mph are likely.
8:59 pm 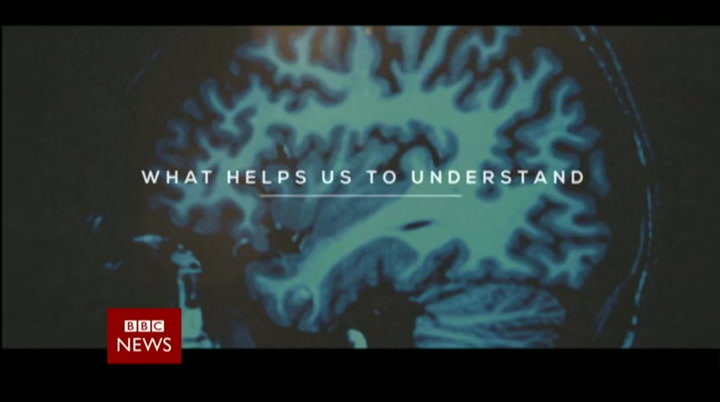 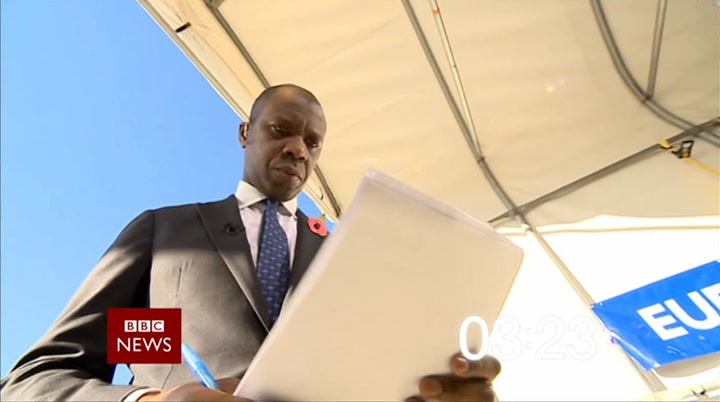 Mark Kermode gives his unique take on the best and worst of the week's film and DVD releases. With Jane Hill. Also in HD. [S]