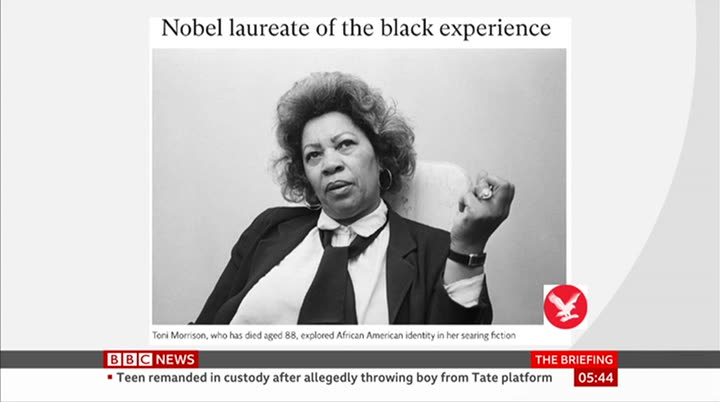 in the independent. she's died at the age of 88. the paper describes her as the nobel laureate of the black experience and says she explored african american identity in her searing fiction. one wonders what toni morrison may have made of this picture on the bbc news website, a handcuffed black man being lead by rope by two white police officers on horseback. it happened in texas, and the galveston police chief has apologised, saying his officers showed poorjudgement. and finally, the daily telegraph has a surprise for us all. it turns out, according to new research, coffee has no impact on your sleep. scientists in the us say cigarettes and alcohol will keep you awake, but drinking tea or coffee within four hours of going to bed has no affect at all.
5:46 am 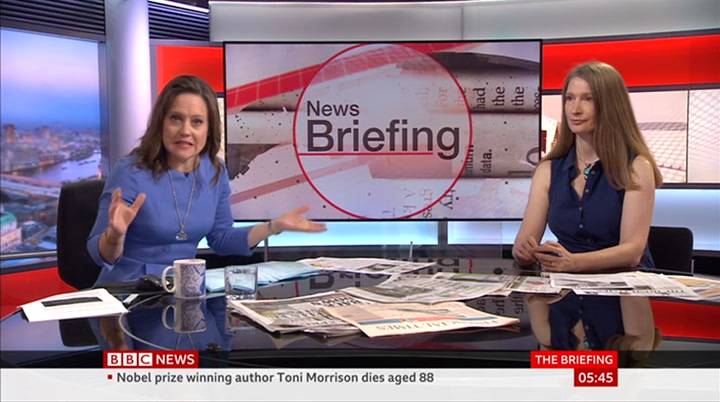 you completely disagree with that study. any of you have been in touch saying it really does mess with your sleep patterns. so let's begin with the irish times, and with me is jane foley, senior foreign exchange strategist at rabobank. let's get started. the irish times is looking at this meeting between borisjohnson is looking at this meeting between boris johnson and leona is looking at this meeting between borisjohnson and leona radtke. it doesn't say when it will happen, there is nothing official yet but it is talking about the fact they need to talk. if there is a hard brexit oi’ to talk. if there is a hard brexit or no deal brexit on october 31, there will be a border potentially between the north and the republic of ireland. this is very significant, for everybody in ireland, it does of course raise concerns about the history of violence in the region, the good friday agreement in the 1990s, it did help to appease. the irish are
5:47 am 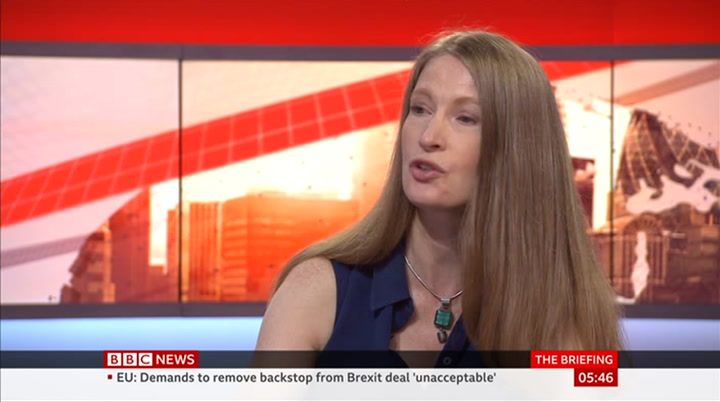 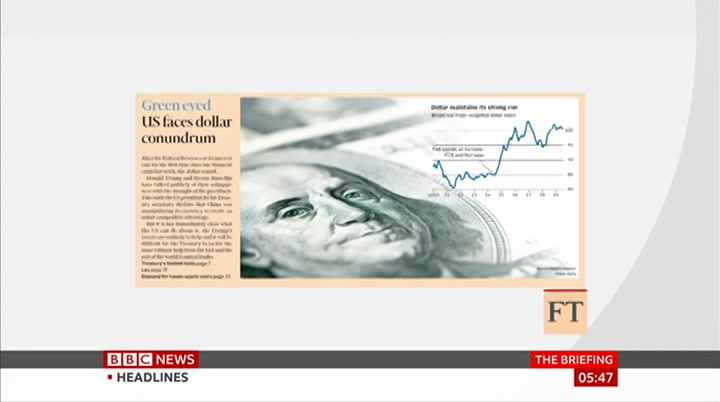 manipulative by the us treasury and this article in the financial times looks at the dollar conundrum because it would seem no matter what the us does, they cannot avoid this strong dollar, and for them, that is tough when it comes to their goods going to other parts of the world. it is tough. any country, when there is sleep —— slower growth and weak inflation, they would like a weaker currency. just about all the central banks find themselves in this situation and have a weaker currency. but the us authorities haven't been able to do this. donald trump has spoken out, we want a wea ker trump has spoken out, we want a weaker dollar. that is good, verbal intervention in the markets but that has also been unsuccessful. the fed cuts rates anomaly that does the trick but that is not doing it either. but i have many other major central banks. overnight we had half of 1% basis point from new zealand, the australians have cut, if you
5:49 am 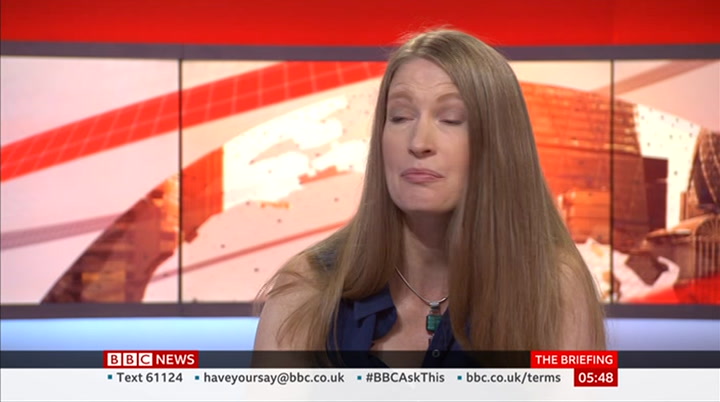 like the impact of that has been deleted. the importance of the dollar in the well payment system is pa rt dollar in the well payment system is part of this reason as well, and this means that when for instance investors get nervous and when they set off emerging market assets and have been very nervous earlier this week, money tends to naturally flow back into the us dollar and the dollar... the us economy is never going to go bankrupt. that is the basic theory. there is this impression that us treasury market is certainly deemed to be a safe haven even though the us deficit does not look very good right now, there is deemed to be this... in the same way the japanese yen is seen as a safe haven, traditional places people park their money when they are not sure what to do. in the meantime, we have seen the chinese currency dipping below their daily fixing and that again increases nerves in financial markets because it was monday's move on the chinese
5:50 am 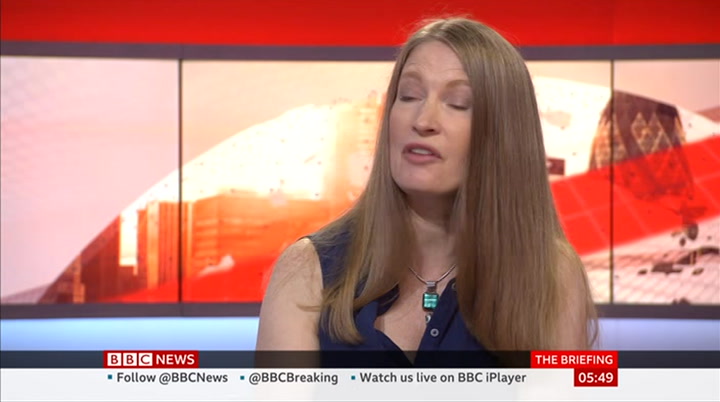 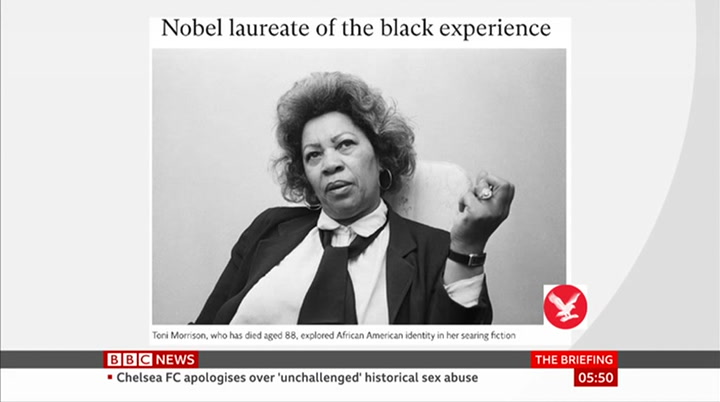 her essays. not only does she do the 11 novels, but she writes children's stories, essays. she was and still is an amazing figure in terms of black american culture. as you say, she started to write in the 70s, she was the first african—american woman to win the nobel prize for literature in 19931 believe it was in some of her, one of her novels was made into a film with oprah winfrey in this. it had an enormous cultural impact. i think she will go down as one of the greats. not only did she do all of that writing, but she was also a lack at one of the famous us universities — not a lecturer. the tributes that have come through today not only cite these details but also emphasise the great storyteller that she was as well. she was a great storyteller because she didn't try and tell the story for a wide reader, she really,
5:52 am 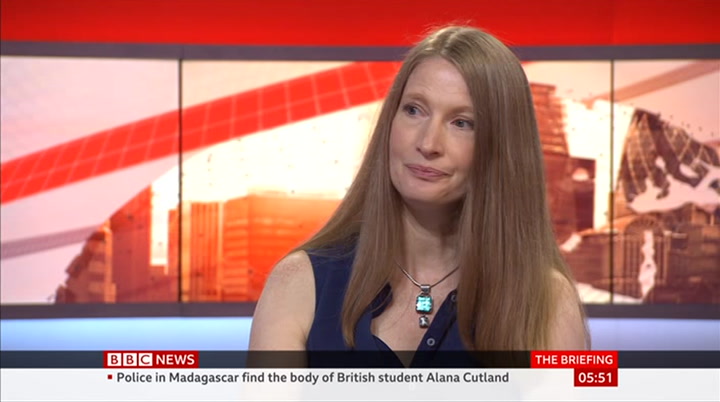 many would say, she just told the story as it truly was. she wasn't trying to make it better for the audience more manageable for the audience. it wasjust audience more manageable for the audience. it was just the roar truth about what it was like when she was growing up at a time when people got into trouble if they were helping young black people learn to read —— raw. the new york times today say she described and often crushing experience of black women. so, fantastic. i am going to read one of her books this summer when i go away andi her books this summer when i go away and i am not sure which one of the 11 to pick. if you would like to send me your views, if you have read her books, let me know. this story that follows is a texas police apologising for this image of a man being dragged away by a rope, a black man. it is shocking. it looks like something out on a movie. in this day and age... it should be historic. precisely. what is more shocking is that the character under
5:53 am 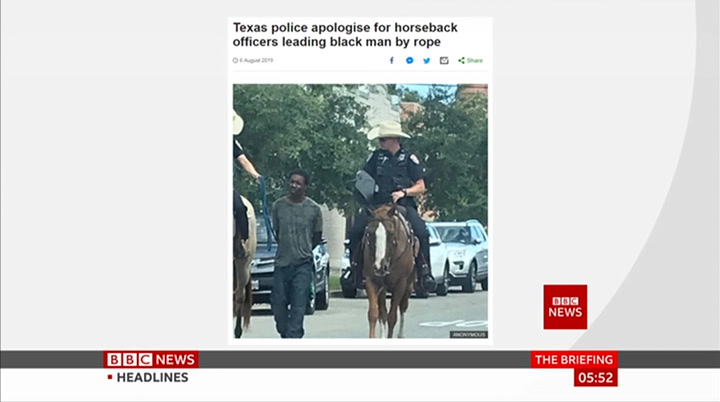 arrest had a mental illness. clearly, this is a deeply humiliating experience. the daily telegraph, rest easy. coffee does not disturb your sleep. it is a big study. quite often these studies come out every day, let's be honest. some you can take with a pinch of salt. this was 785 people monitored for over 5000 days and nights. they we re for over 5000 days and nights. they were closely monitored. by top medical school, harvard medical school. it was one of the institutions taking part in this. they found that cigarettes and alcohol did affect their sleep, but if you hadn't had coffee for hours before you went to bed, didn't affect you. i am not sure about this. i don't drink caffeine, i had the odd cup of decaf. when i do have caffeine, my heart is something so fast which is when i know i have had it by mistake. i know it does affect my sleep and i wonder if perhaps people who are much more addicted or used to caffeine don't have it.|j
5:54 am 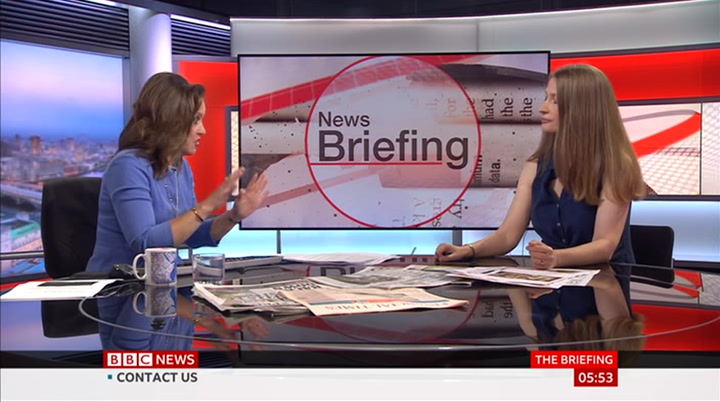 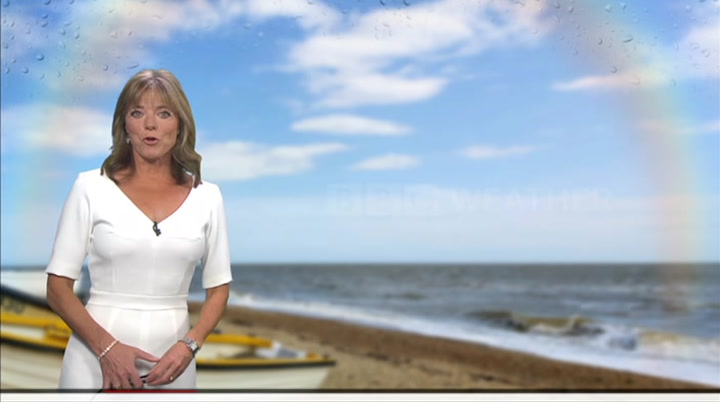 good morning. weather across the uk at the moment is stuck in repeat mode, isn't it? sunshine and showers. now, if you dodge the showers and you get the best of the sunshine, just like we had yesterday in suffolk, a beautiful day, temperatures peaking into the mid—20s, but some of the showers were really quite torrential, as you can see from this weather watcher picture sent in on tuesday afternoon in birmingham. today, the area of low pressure will be sitting to the north of scotland. that's where most of the frequent showers will be and with lighter winds here, they'll be pretty slow—moving as well. elsewhere, it's going to be a breezy day and we start off with a decent slice of sunshine coming through but there will be showers out to the west which will drive in across the country on a brisk south—westerly wind. now, for england and wales, the showers fairly isolated into scotland, particularly eastern scotland. they'll be quite heavy, slow—moving and torrential times, so weather warnings remain in force. a blustery day however you look at it. if you dodge the showers, you keep some sunshine. again, we could see temperatures
5:56 am 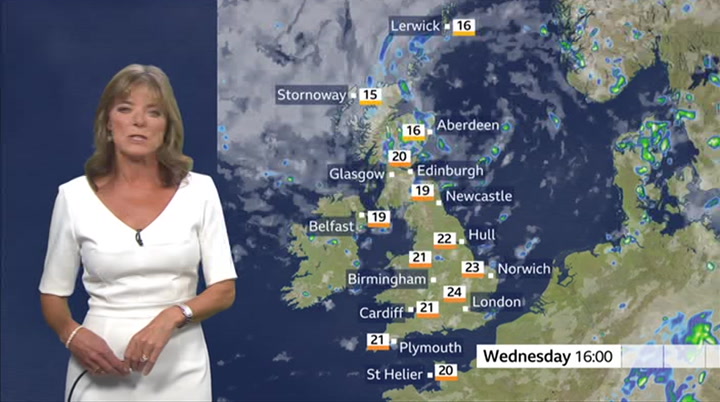 peaking into the mid—20s. but underneath the cloud, with the showers, a disappointing 16 degrees, let's say, for aberdeen. as we move out of wednesday, that low pressure will drift off into the north sea and it's going to allow this little ridge of high to build. so on thursday, not a bad day, certainly the best day for getting out and spending some time outside. that doesn't mean to say we're going to rule out the showers completely, there will be one or two isolated ones particularly across northern scotland and maybe into the south. and eventually, by the end of the day, the cloud will gather here. but not a bad day for many and temperatures again, 16—24 celsius, that's 75 fahrenheit. i hope you can get out and make the most of it because by the end of thursday into friday, we've got an unusually deep area of low pressure for this time of year, it's going to bring some wet and eventually some windy weather with it. so if you've got outdoor plans, if you are under canvas over the next few days and towards the weekend, please keep abreast of the forecast. heavy rain will move through northern england, scotland and northern ireland, leaving a trail of sharp showers behind and the winds really
5:57 am 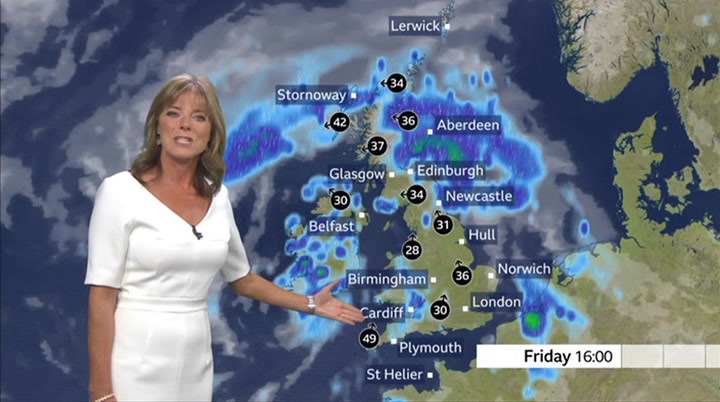 starting to pick up — gusts in excess of 40—50mph as we go through the end of the day. in terms of the feel of things, 16—23 degrees, but underneath that rain, it's going to feel yet again pretty miserable. and as we move into the weekend, well, that area of low pressure will sit across the far north of scotland and it's to the southern flank of the low where the winds will really start to pick up and that could be an issue. so it's worth bearing in mind, friday, heavy rain and the winds will start to strengthen. by saturday, we could see gales across the country. there you go, take care.
5:58 am 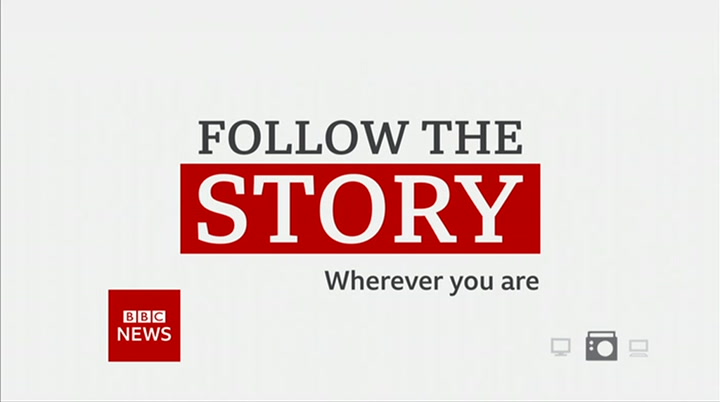 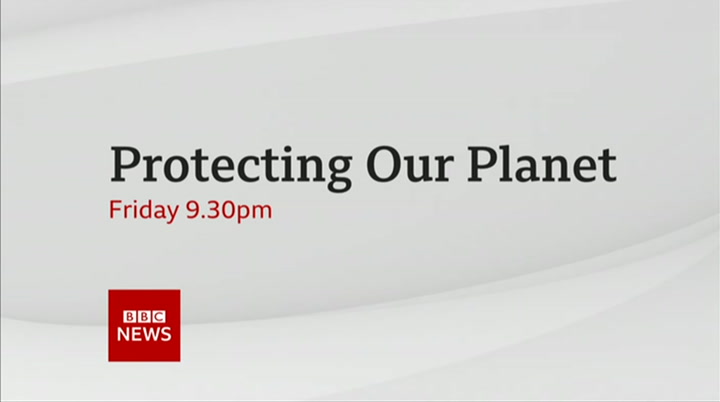 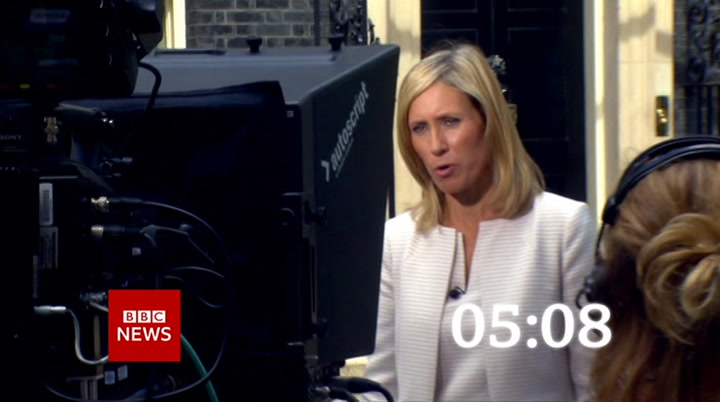 good morning. welcome to breakfast with dan walker and louise minchin. our headlines today: supermarkets call on the government to scrap strict competition laws, to ensure food supplies in the event of a no—deal brexit. i'm ata i'm at a wholesale market to find out what preparations are being made here by treaties. plans to resolve a row with doctors over their pension, after senior medics refuse overtime shifts increasing waiting times for operations. in sport, rooney returns. he'll join championship side derby county as player—coach when he leaves the mls injanuary.
left
right
Borrow Program
tv

The latest news, business and sport from BBC News, plus your need-to-know guide to the big stories coming up today.