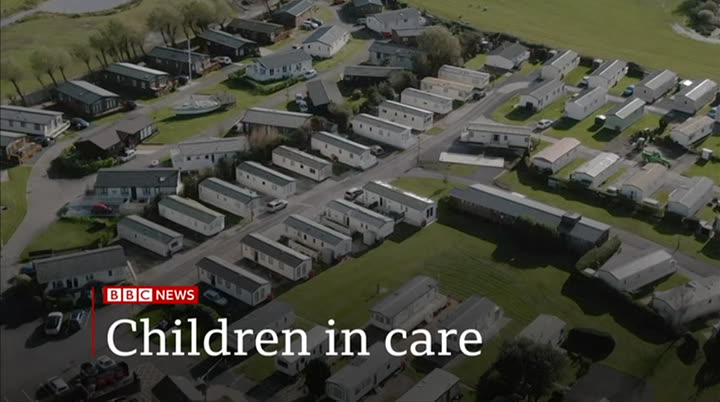 narrowboats and holiday homes in england and wales, in what is being described as a scandal in the placement of children in care. it is a national scandal, yes. how can we be happy with children in tents, on boats, in all of these transitional things? 33 people have been injured in a coach crash in france. 11 of them are british. delhi's toxic smog forces airports to cancel flights. the city's chief minister says the air has become unbearable. and lewis hamilton wins his sixth formula 1 world title. he is nowjust one short of michael shumacher‘s record. hello and welcome to our look ahead
11:31 pm

to what the papers will be bringing us tomorrow. with me are the parliamentary journalist tony grew and the journalist and author caroline frost. many of tomorrow's front pages are already in. in the metro, nigel farage says he won't stand to be an mp in the upcoming election, instead focusing on campaigning for his brexit party candidates contesting 600 seats. in the express, borisjohnson‘s pledge to cut taxes for every worker by boosting the national insurance threshold, and an extra £5 billion on welfare. in the mirror, jeremy corbyn says he'll save free tv licences for over—75s, a cash boost for 3.7 million pensioners due to start paying for the licence injune. leading the daily mail, hospitals deluged by 5,000 diabetes patients every day. one in ten of all admissions is down to the disease. in the times, trafficking gangs using top schools to get vietnamese migrants into britain on student visas, before disappearing as soon as they enter the country.
11:32 pm 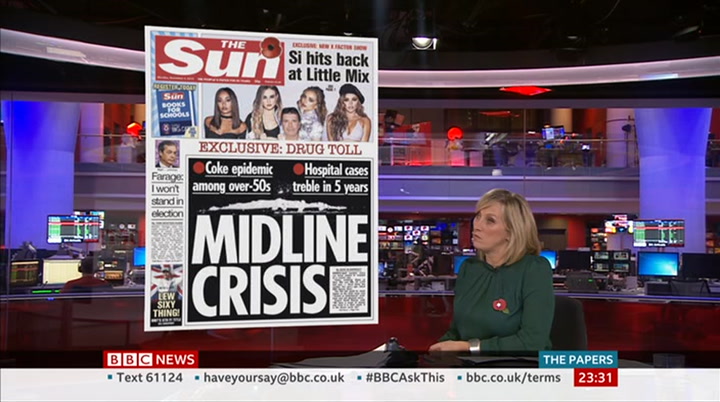 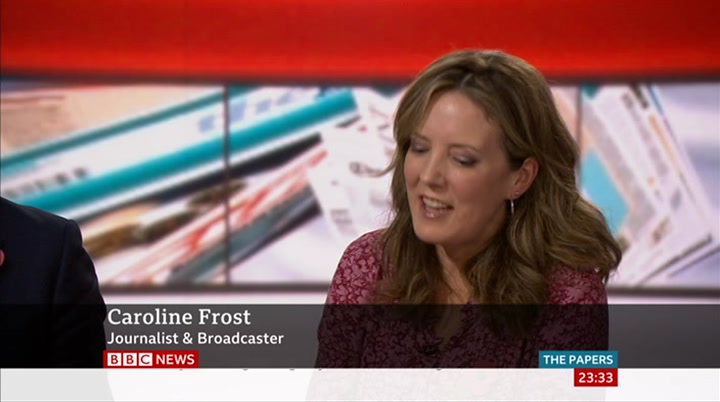 they are paying attention to these issues —— bread—and—butter issues. the nhs is short 100,000 nurses, for example. there are a lot of serious issues in the nhs which will not solved by people talking about how much money they are going to spend. but they know that a lot of people ca re enormously but they know that a lot of people care enormously about the nhs in this country, and they treasure it, and they want to see and believe that the politicians who have access to the money, who can change policy, will do something about it. dominic cummings's rulebook has told boris johnson that the three issues are, if you mention nothing else during this campaign, it is the nhs, it is police crime, and it is immigration. this is one of those issues that jeremy corbyn has similarly said there are things in this country people do care about other than brexit. the media bubble has been banging the brexit drum for three years now, but meanwhile, it has always been in crisis. i am surprised doctors have come out so sceptical. i would have thought they would welcome it after three years
11:34 pm 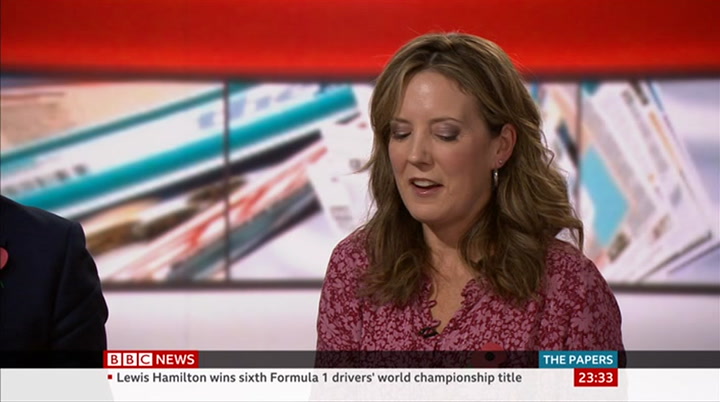 of pretty much everything being put to the side. they have gone front and centre again. perhaps i am being naive and they are the ones saying it is about reducing expectations. this could look like a political foot ball this could look like a political football that is being passed around and it is a case of who can promise more and there is no actual proof. let'sjust see what more and there is no actual proof. let's just see what comes out in the costings in the next week. each of the parties will be asked to provide actual, physical proof of where the money is coming from and where it is going. and i think perhaps a little more light will be shed on these at the moment kind of airy fairy promises. and whether we can be as voters about what is possible for the nhs, given that it does cost a huge amount of money to run it to the standard that we are told it could be. one of the things i find frustrating about our politics not just at the moment but basically since tony blair was prime minister, was the idea that we could maintain the nhs but also improve it while not raising taxes to pay for it. i think politicians are far too timid
11:35 pm 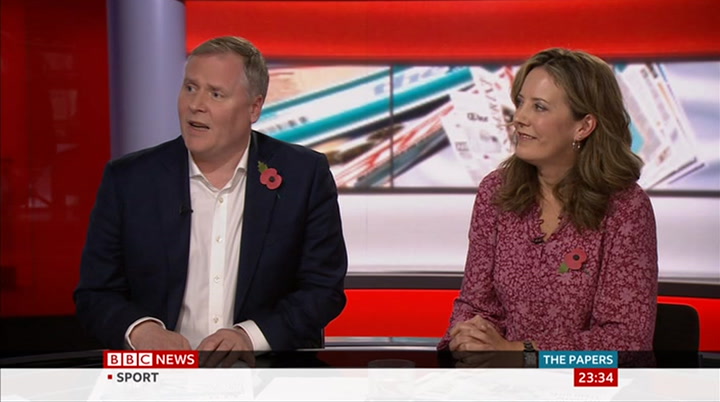 about this issue. you don't necessarily win elections by saying we will spend more, and you will have to stump up. that is counterintuitive, if you voters we are going to raise income tax by 1p, but that will be ring—fenced for the nhs, people wouldn't regard that is such a terrible thing. the thing is, there is a little bit of an federalisation of voters, this idea that people only think about brexit 01’ that people only think about brexit or that people are only motivated by that. people are sophisticated enough to understand that the cost of healthcare continue to rise, and that we are going to have to find a way to pay for it. looking at the daily telegraph, nigel farage could ruin the uk's hope of brexit, coming from some conservative eurosceptics. it sounds a bit counterintuitive. that is not a headline you would have expected to read two or three years ago, however it has all become a bit strangely realigned, evenjust in recent weeks. the point is that he has really stuck to his he has
11:36 pm 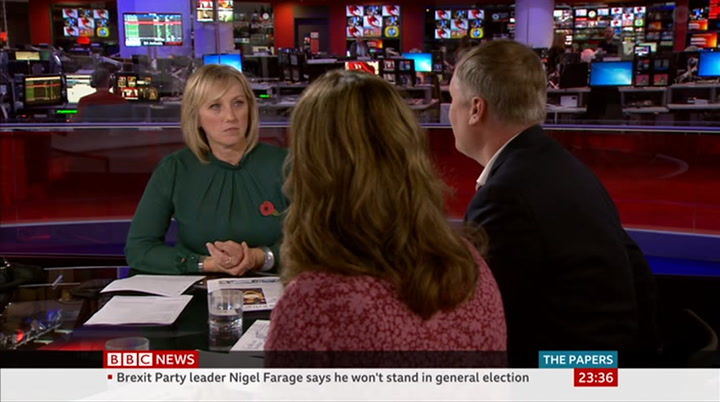 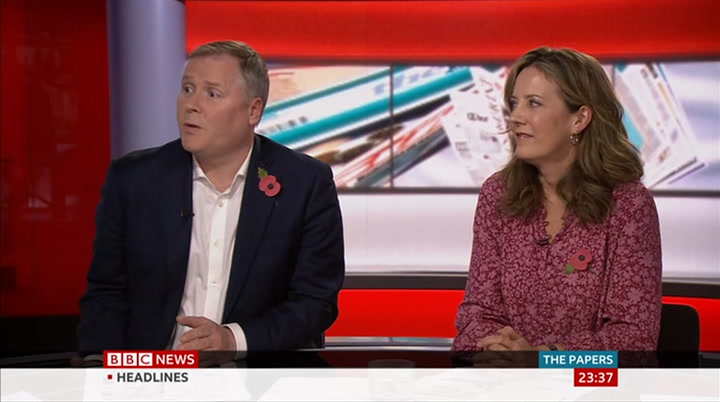 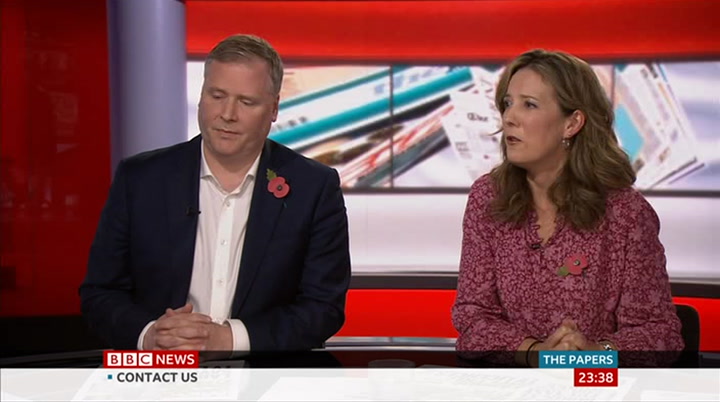 this sort of airy fairy language. this morning it was about insulating people's houses and in the meantime creating 200,000 jobs in the whole rippled out effect of wringing this insulation. so we're going to be eco— friendly, everyone will be in employment, and you will have a lovely telly to watch age you are. the point of this is it would make ita the point of this is it would make it a welfare benefit again, which the conservatives chose to remove by basing the responsibility for the policy and the cost on the bbc. yes, it is not actually clear what labour is going to do. they have just said they are going to restore it. there area they are going to restore it. there are a whole series of options they could legislate to make it legally the responsibility of the bbc, for example, or they could pay for it out of taxation. but the point about it is, actually, again, this is an issue where people are being infantilised. there are many over—75s who can afford a television license, and many under the age of 75 who are in prison because they can't pay for their tv licence. this
11:40 pm 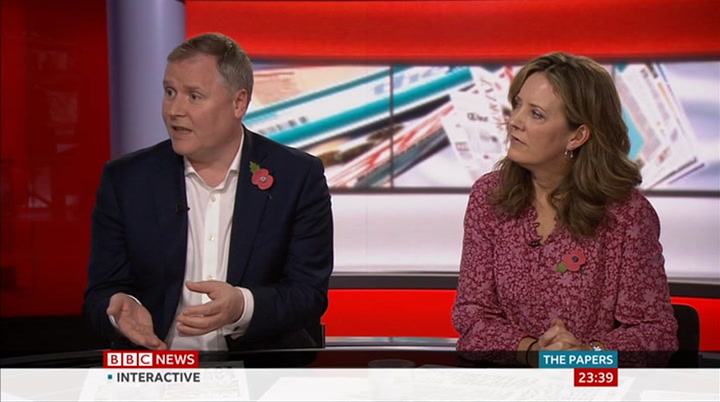 whole thing is skewed towards the idea that over—75s are some sort of special category. the bbc, as i understand it, were looting having a means understand it, were looting having a m ea ns test understand it, were looting having a means test for it. if you receive a pension credit, you would get it. exactly, if you are a low income get getter, you would get it, and if you are not you are not. which to me seems like a sensible approach. the point is, isn't it, a 745 million town built the bbc has to foot, and town built the bbc has to foot, and to do that they will have to be cuts. yes, and so again it comes back to this idea of the people being treated both as one homogenous group, everyone over 75 is the same, but also that voters aren't sophisticated or intelligent enough to understand that there are trade—offs in all of those scenarios. looking at the express, boris, i will cut taxes for every worker. boosting welfare spending by £5 billion. what happened to austerity? what? no, that was last
11:41 pm 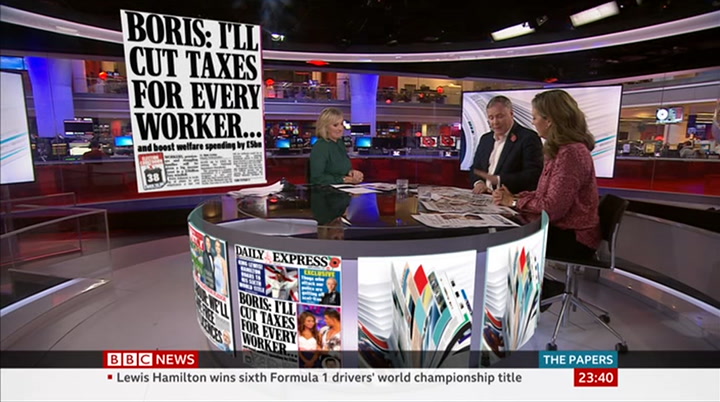 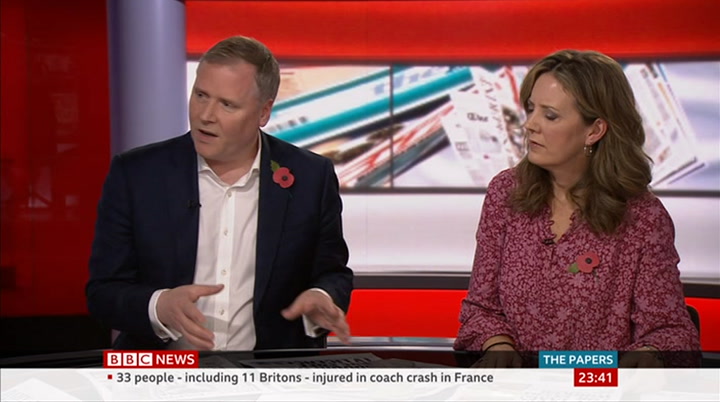 to this —— focus grouped. is it a cut in national insurance people are interested in? this is part of the sophisticated electioneering already upon us. and whatever you're going to do, how are you going to pay for it? this is it, the money has to come from somewhere. this is the gift, this is also the gift. there is no such thing as a free gift. somebody is paying for it. theresa may told us there was no such thing as the magic money tree. john mcdonnell sort of hinted where they we re mcdonnell sort of hinted where they were coming from. he said it was all about that top 5%, he will skim off the cream, and they are at least in theory transparent about that. costings are yet to come out exactly where that will happen, but he is all about projecting the —— protecting the majority of people so they are not paying more tax. in theory borisjohnson has gone a step further and will be giving people this little windfall. whether people think that £460 a year is worth it when it comes to all the other things that were kind of disappear into the small print, as i say,
11:43 pm 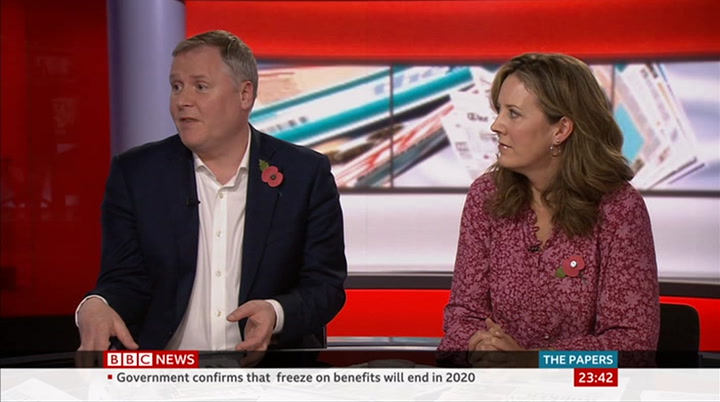 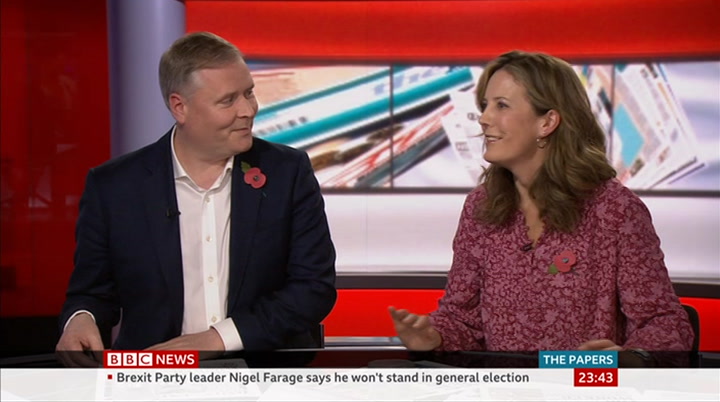 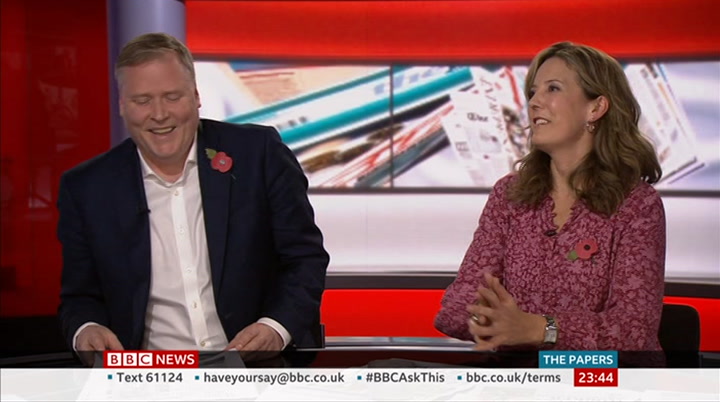 riley, and pascha. they are so busy not looking at their partners because they don't want to be caught by the other curse. that's it for the papers tonight. don't forget, you can see the front pages of the papers online on the bbc news website. it's all there for you seven days a week at bbc.co.uk/papers. and if you miss the programme any evening, you can watch it later on bbc iplayer. a big thank you to my guests this evening, tony and caroline. that's all from us tonight, and goodbye. next on bbc news it's time for the film review. hello, and a very warm welcome to the film review on bbc news. to take us through this
11:46 pm

No need to wait until tomorrow morning to see what's in the papers - tune in for a lively and informed conversation about the next day's headlines.