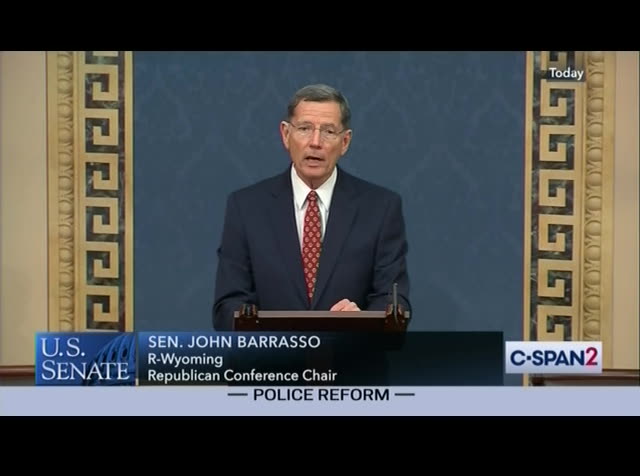 a bill to the president of the united states and have it signed into law and help our country. thank you madam president. i yield the floor to suggest the absence ofen a quorum. they had a very open conversation with the press.
9:22 pm 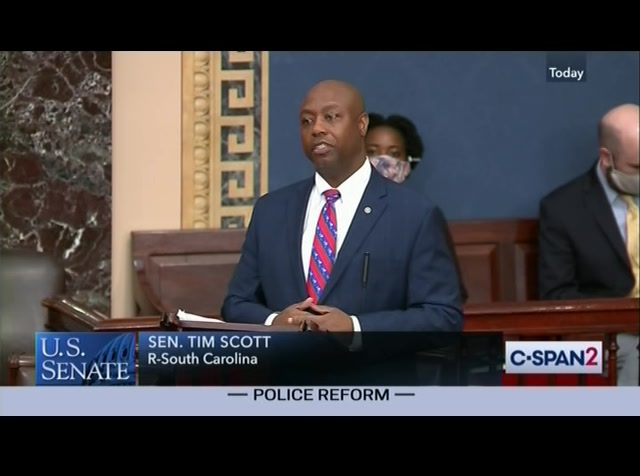 they believe some help this process does not include an actual open process where you have the chance over several days and decided the public to talk about an offer amendments. pe you want a process where you have an opportunity to persuade those in this body and the american people about the value of your amendments, this motion to proceed if the motion you should vote for.
9:23 pm 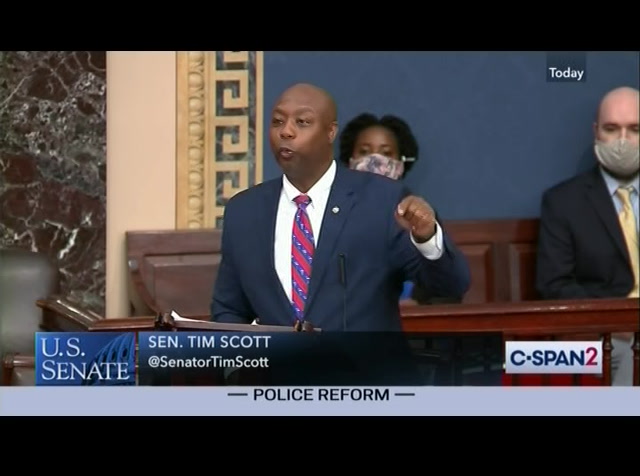 i'm not often quoting speaker pelosi or paraphrasing. but i agree here that it would be important for us to have a conference that requires this body to pass legislation that goes to a conference with the house. the only way the legislation in this body is for the republicans and democrats working together because the majority in the senate from a legislative purpose, the majority in the senate added that means we have required 60 votes to.
9:24 pm 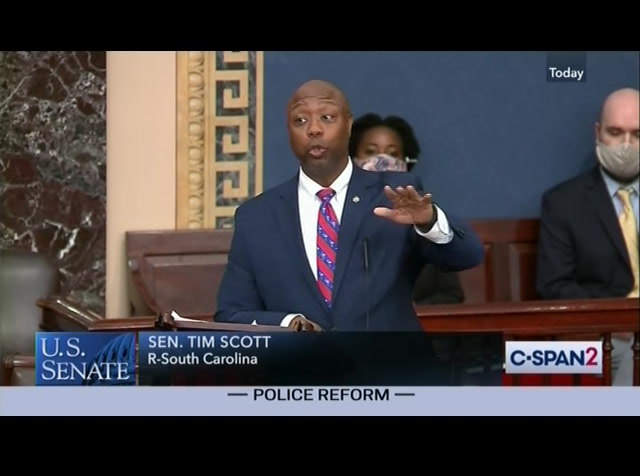 we ceq and we hear you. i understand howe it feels to lose your home, get in the car and be afraid of getting stalked. i've spoken about that too many times already. but what i will say is this body has a chance. we hear your concerns. in the motion to proceed is simply a procedural motion that says let's debate the underlining though. have a conversation in front of all of the american people.
9:25 pm 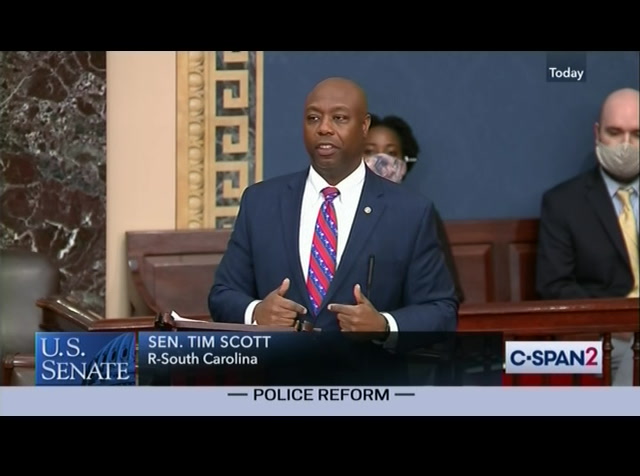 and doing police reform in the right way. if you don't trust the republicans or democrats and watch the process play out right here is that it's something to watch it play out and come to your own conclusions about the seriousness of this issue but if we missed a golden opportunity, if we miss the opportunity to debate the underlining issues, all you wind up with is talking to plants and campaigns. some believe the one-sided would rather campaign on police reform and saul the police issues.
9:26 pm 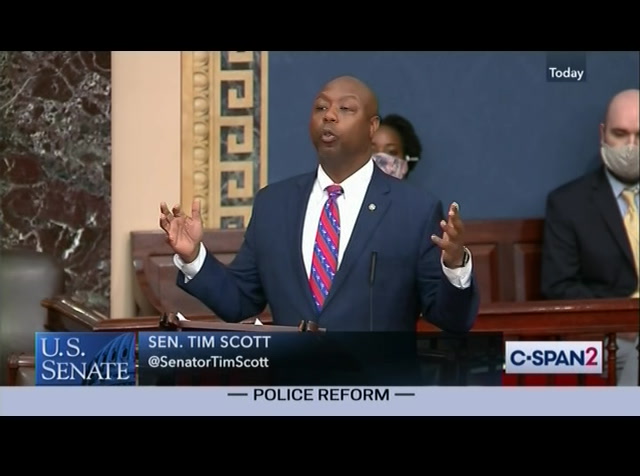 they are willing to come to the table to have a serious debate on the underlining issues that have brought combo string into the chamber to solve it. we are all here now. all of us. we do not have to tackle the issues like i did when i was 16 and 17 and 18 and 25 and 26 or 30. we have the ability to see to so this young man and to that young lady we don't just see you and hear you, but we acted on it and by doing so, i believe, madam president, that we can make a difference in the lives of americans that we actually save.
9:27 pm 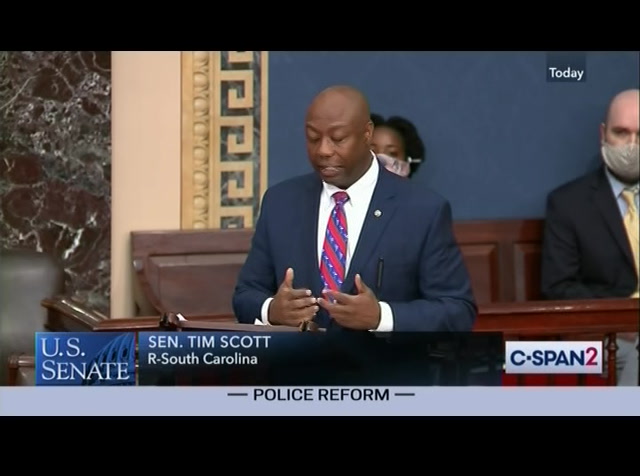 if there'sri been criticism i wl listenis to the criticisms but t doesn't require new reporting measures. i sat in my office speechless because our legislation absolutely and positively requires him to the hospital has a 10% penalty.
9:28 pm 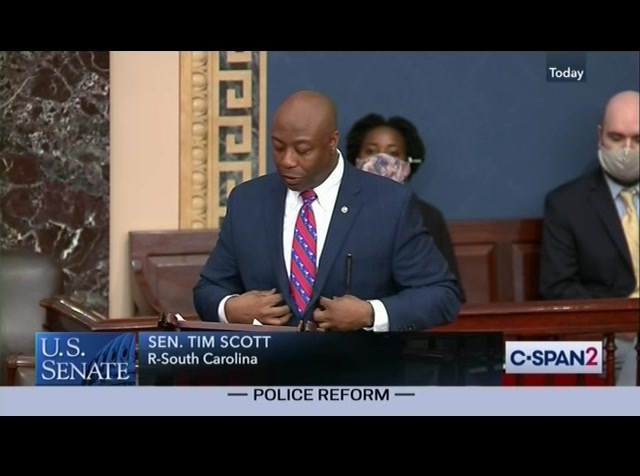 the legislation doesn't stand any amount of ordinance and this is critically important because in louisville kentucky, the conversations took a drastic turn in the wrong direction that led to the killing of breonna taylor. friends were talking about how the house bill bans the cases but when you open the legislation and read pages, what it does is bans for the federal agents. louisville kentucky. the complaints and concerns about what actually helps the situation in places like louisville kentucky isn't answered by the house while.
9:29 pm 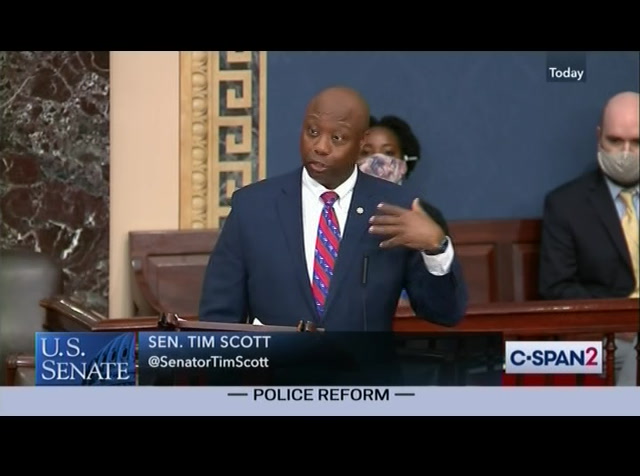 to direct the resources and the decision and the right way. you could say that it takes a more deliberative process. while let's come to an agreement. i heard that the justice act wouldn't end chokehold into the legislation actually bans chokehold. let's take a closer look, madam president. with strict penalties facing local police departments, they go after chokehold's by holding off on the grand dollars from
9:30 pm 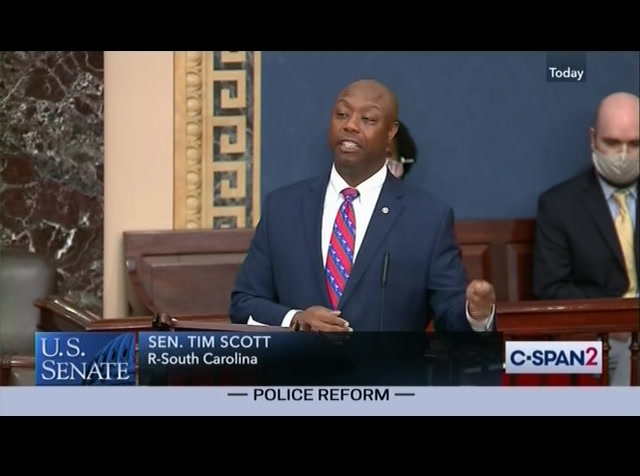 local agencies and state agencies.te our legislation is the same thing. we go after local department and statinthe state agencies by withdrawing some grant dollars. but there is says about the ban on so-called that's important, why is th that important? because if you are watching at home and hear the ban on chokehold but you don't necessarily have the correlation information to reach the conclusion that they are on me talking to federal agents, then .hy is that important? because he wasn't and isn't a federal agent, he was mobbed. so, the conversation around banning chokehold's for federal agents let me say it differently for several hundred thousands of the 800,000 law-enforcement
9:31 pm 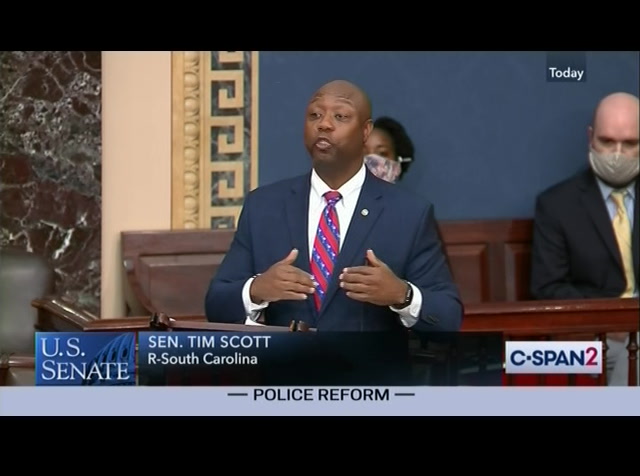 officers would not apply. that is really important information to share with the american people. why is this so, it's called the constitution. it's a pesky little thing but it's the fact it doesn't allow for the federal government to dictate to the local law enforcement of what they can and cannot do. i talked to ten democratic senators today and i told them all the same. let's get on the floor and amend the bill and see what happens, because if you cannot ban and wide-awake amount of legislation says if they instruct the ag to
9:32 pm 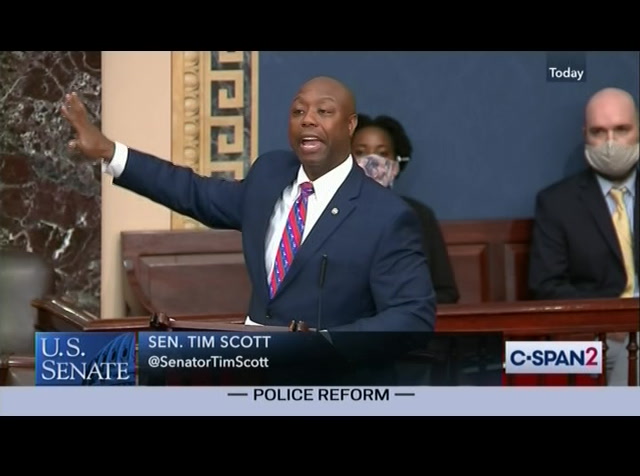 figure out how to ban it on the federal members and we reduced numbers and take the money away before the departments that have not banned so-called and executive order for the certification process and by the governing agency it doesn't look favorably on the chokehold. whether you are in the house, senate democrats, republican senator or the white house, we are all closing in on the same outcomes. here is what may have been just as important as the distinction i hope i cleared up on the differences that are not the biggest differences on the important issues. but they said this morning is not what we were doing. i think that selling something
9:33 pm 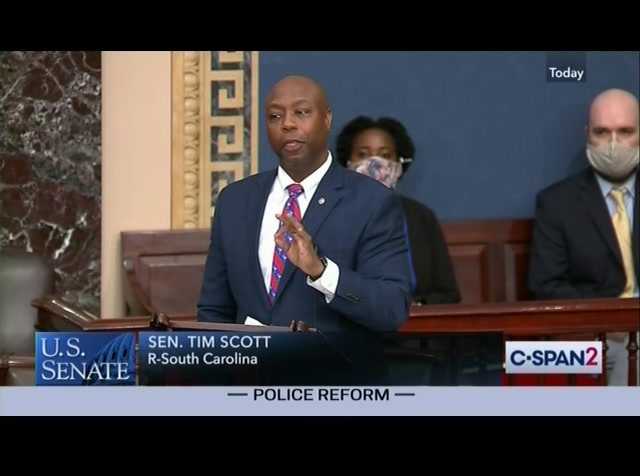 as important as you ca you can y manipulating or by motivating. i want to declare that our legislation says what it says, not what others say it doesn't say. beyond the fact because in my legislation, the senate republican legislation and the house legislation there is so much common ground we can work from. to lose this moment for the kids and young adults watching this process lets me give you a couple of examples of what i mean.
9:34 pm 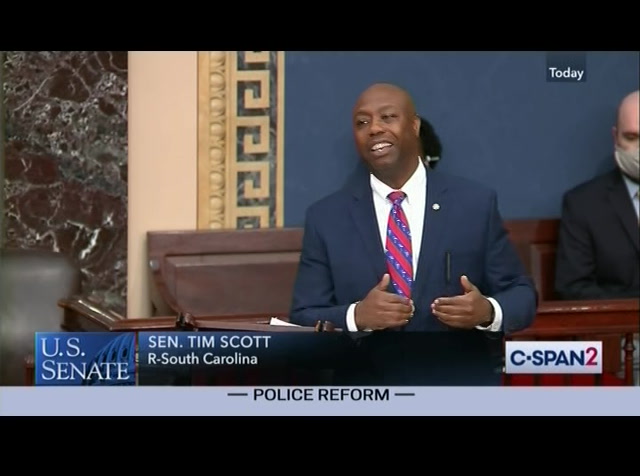 it's in the training and the duty to intervene training. most sides agree, both sides agree passing the anti-whingeing legislation and by the way, myself, senator grassley, the chairman of the judiciary committee with senator harris and a senator booker asked not once in this chamber voted twice. it stalled in the house before here. thewe caught himthey got it don. another area of agreement. both sides agree more body worn cameras are a good thing both
9:35 pm 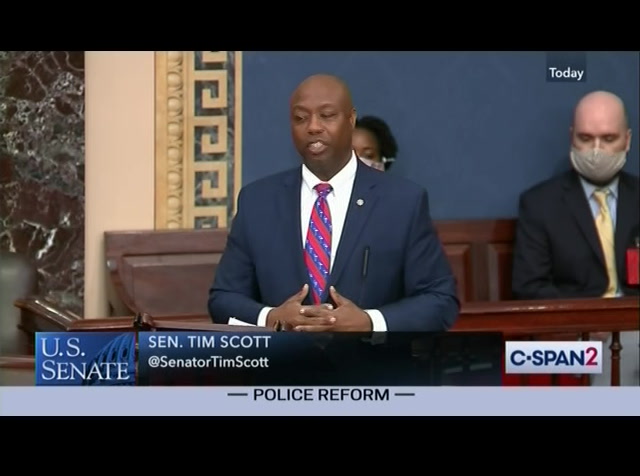 sides agree on the creation of a national criminal justice commission which by the way was the number one recommendation of president obama's 21st century policing task force. so, why can't both sides agreed on the motion to proceed. if there i is that much commonality in the underlining legislation, if we are all watching the same pictures that wthey all sound disgusting and unbelievable, why can't we agree to tackle the issues in a substantive way here on the floor i want the public to see
9:36 pm 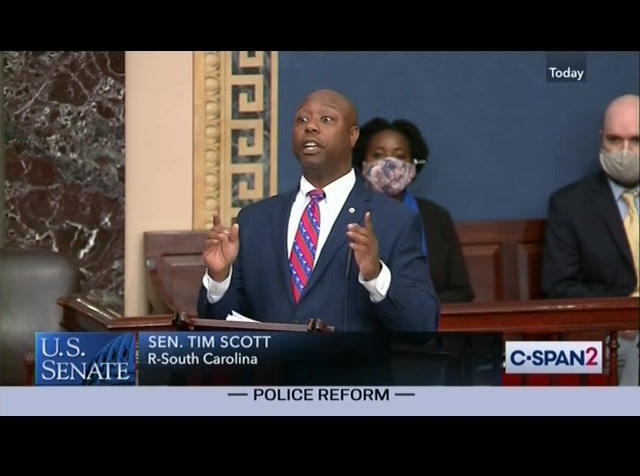 into thand world to see and allf america to see us debating this issue. thank you, madam president.
9:37 pm 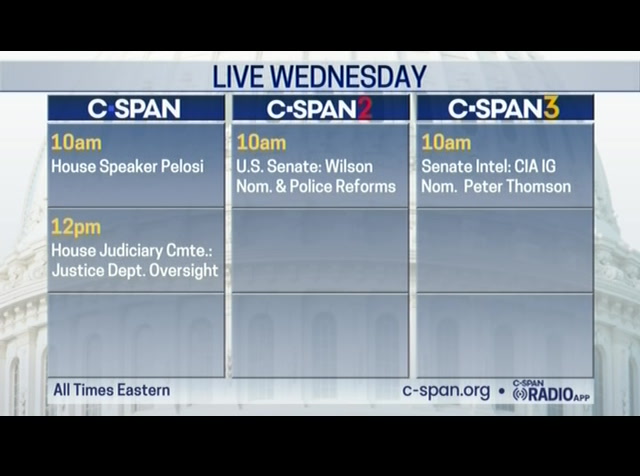