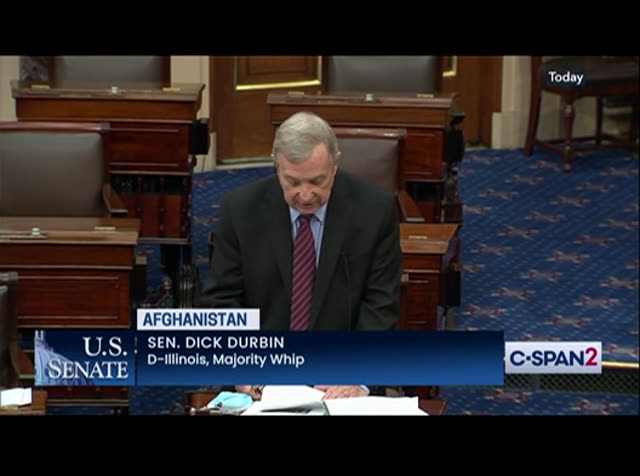 administration. hr mcmaster donald trump's second national security advisor recently called the deal a surrender agreement with the taliban. that's the agreement of joe biden inherited when he became president and when it came time to face that responsibility, that is exactly what he said, i accept the responsibility for my decision. what a contrast with the previous president to accept responsibility for nothing. this president stood up and said i will make the decision and stand by it. i respect him for that. it's time for america to end this war and it's time for us now to try to find a way to bring this nation back together. i yield the floor. >> 20 years ago september 11, 2001, americans watched in horror as two planes struck the world trade center in new york city.
9:41 pm 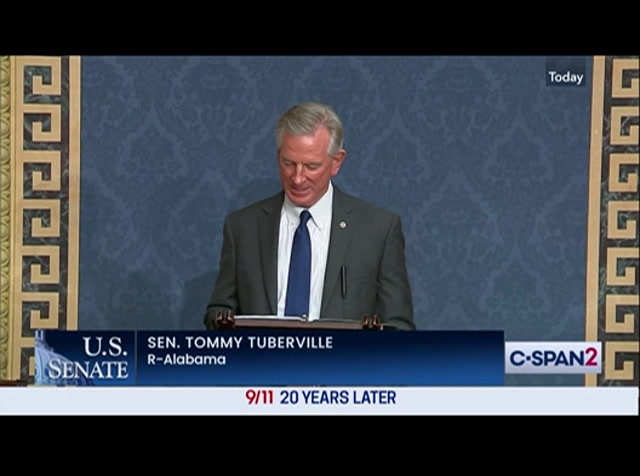 we watched asne another plane slammed into the pentagon and yet another bound for this very city crashed in pennsylvania. that day was the worst attack on american soil in our history. america's death toll surpassed pearl harbor and december 1941. that day children came home from school without their parents, calledem family members that hadn't returned. lives were changed forever. yet instead of tearingrt us apa, instead of frightening americans off theor world stage, the cowardly act that attacked on september 11th brought the nation together. but just remember we were at war with al qaeda prior to 9/11,
9:42 pm 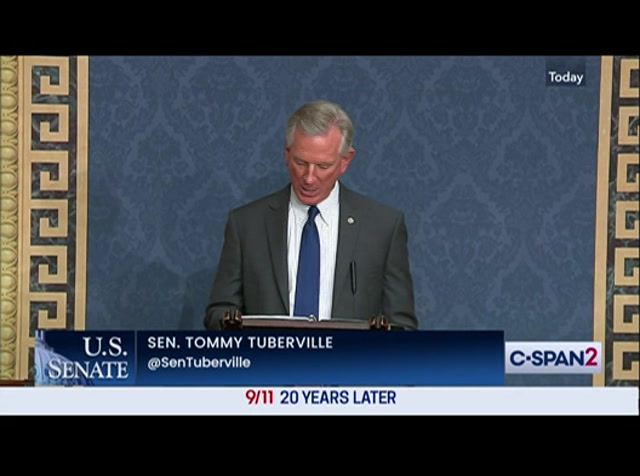 2001. in the 1990s between 10,000 to 20,000 people went to afghanistan to train to be terrorists. insurgency spring to life in algeria, indonesia, philippines, somalia and yemen. the world trade center was bombed for the first time in 1993 by youssef who spent time in a terrorist camp in afghanistan. 1998 q al qaeda bombed to u.s. embassies in africa. they bombed a u.s. warship, the u.s.s. cole, killing 17 americans. the 9/11 commission would later
9:43 pm 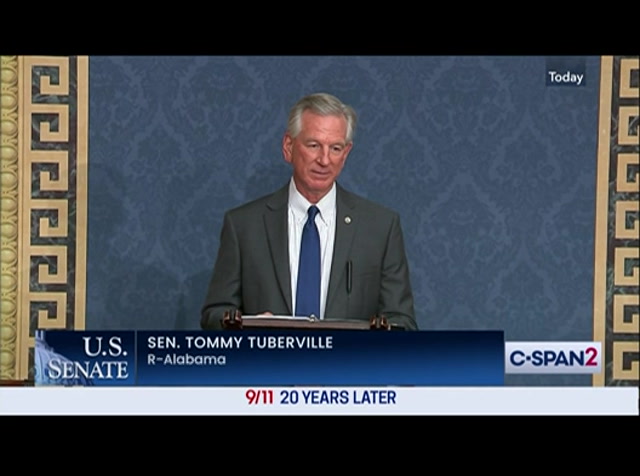 write the attacks were a shock but they shouldn't have come as a surprise. that came from the commission. but they were surprised as most americans because the leaders simply ignored the threat, issued a week diplomatic school and promise over the horizon missiles and surveillance could solve the problem. what solved the problem was american resolve and american might. that fighting spirit began on the bright blue morning of september 11 on a 32-year-old software salesman named todd beamer boarded a united airlines flight 93. he knew his plane was likely bound for another mishap or
9:44 pm 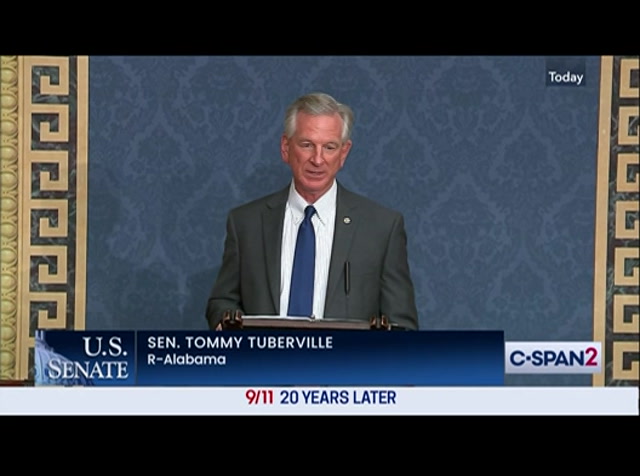 catastrophe after hearing it on the telephone just after takeoff. he knew this plane was either headed for the capital or the white house. he knew what happened to the other flights because of conversations. but instead of being fearful, todd beamer rallied his other passengers, the former college athlete stayed calm and prayed the lord's prayer. then he and his fellow passengers unleashed hell on the hijackers of their plane. the moment he said let's roll is the moment america began to stfight back against radical islamic terrorism. that's when the war started. the whole country took up todd's battle cry of let's roll. over the next 20 years, 800,000
9:45 pm 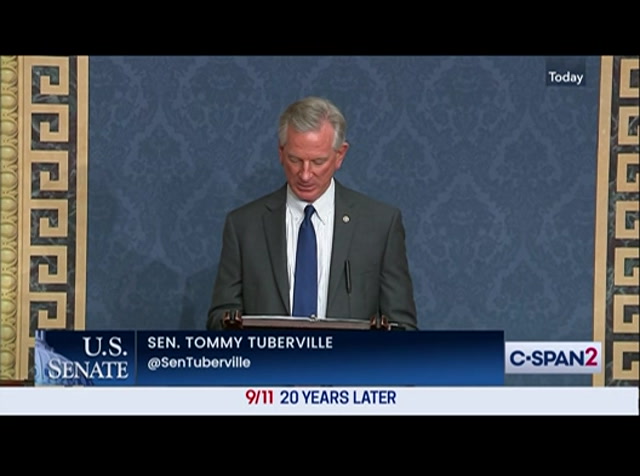 americans rolled into afghanistan. 800,000. of them, 2,461 were killed in action including the 13 brave men and women we just lost a few weeks ago. 20,961 soldiers were wounded. the sacrifices were great but so were their accomplishments. with 48 partner nations america smashed the taliban and said al qaeda running for their caves in pakistan. we killed osama bin laden and crushed terrorism networks around the world. over the past 20 years, the death toll from the terrorists inside of the united states was 107 because of our brave
9:46 pm 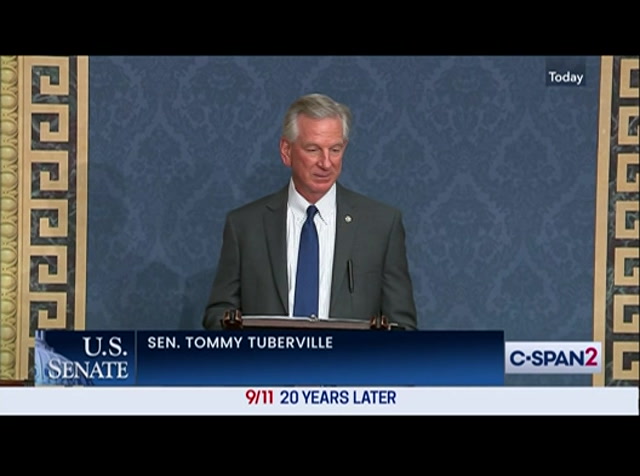 military that took the bite to the enemy overseas. 107 souls is still far too many this country, but the nation n has been spared anothernation n catastrophic attack while our all volunteer force stood the watch in afghanistan. but here on the 20th anniversary of 9/11, what should be a resounding victory and success of american values is instead a defeat and it is especially a better defeat to americans all across this country. it's better because americans have surrendered 20 years of blood, sweat and tears to the enemy. the taliban now control more of afghanistan than they did in 2001.
9:47 pm 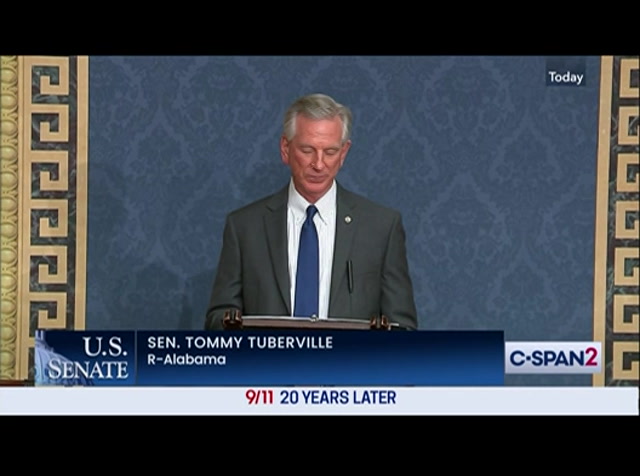 and they are better armed with american guns, vehicles and aircraft. it's better because it was entirely preventable. it's bitter because those who work in national security know in their hearts that the president is wrong when he says the war is over. mr. president, the war is not over. the war is over when your enemy accepts defeat. our enemy, the taliban are not defeated. they are emboldened. president biden has handed them the greatest victory of their pitiful, pitiful history. a victory greater than they could have ever dreamed. using this victory is propaganda against the united states will
9:48 pm 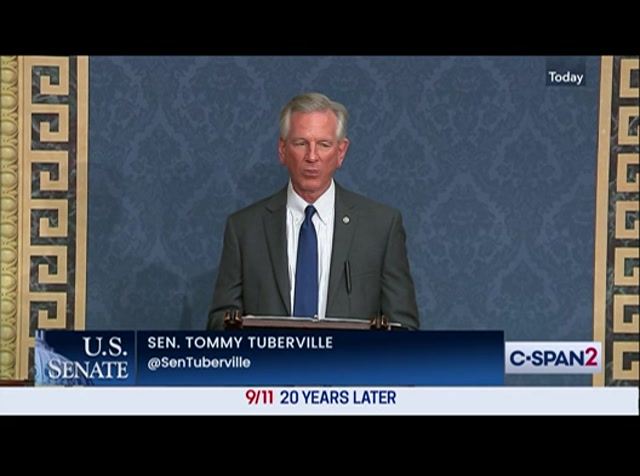 be recruiting gold for t the taliban. make no mistake now that they've sent america running for the exits in afghanistan they intend to bring the terror we saw at the airport home to us right here in the united states of america. we cannot allow that to happen because now after our commander-in-chief decided to leave behind, let me repeat that, leave behind american taxpayer-funded equipment, the taliban is one of the top ten best equipped militaries in the world. over 44,000 military vehicles were left behind. nearly a half a million guns left behind.
9:49 pm 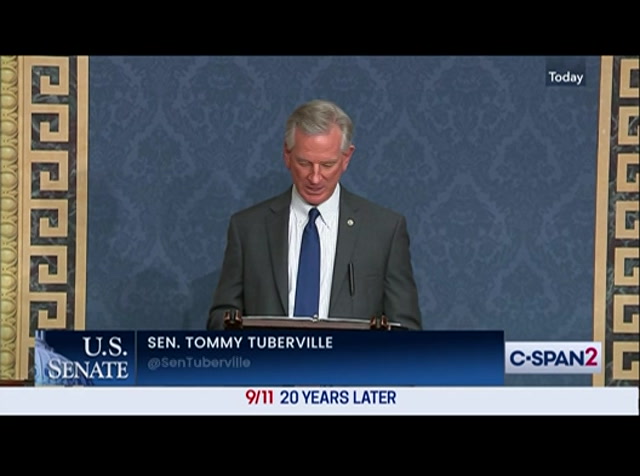 thirty-three black hawk helicopters left behind. all now in the hands of our enemy. and we are fooling ourselves if we think they are not going to use this equipment against us. early last week, ten of my colleagues on the senate armed services committee joined me and calling for hearings on the biden administration's chaotic withdrawal from afghanistan as members of the committee that oversees the nation's armed forces we bear a particular responsibility to seek true and correct answers. we ask to hear from the secretary of defense lloyd austin, the chairman of the joint chiefs of staff general millie, the commander of u.s. central command general
9:50 pm 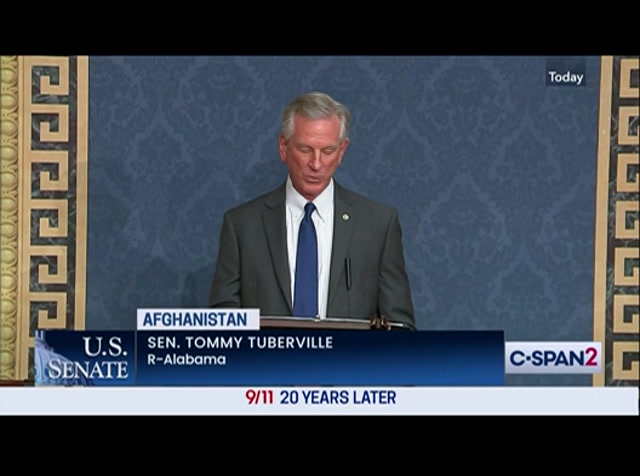 mckenzie, and the last commander of the u.s. forces in afghanistan, general miller. these are our top military leaders who need to be asked the hard questions. and that's what i and my colleagues intend to do starting with why did we give up the most strategic airbase in the middle of asia, bagram airfield, why did we do that? it makes no sense. we owe it to the nation, those who served, their families and our allies to preserve the records of how our time in afghanistan ended for every people we and members of the armed service committee represent here in congress this is the biggest issue facing our military since vietnam. those that have given so much to
9:51 pm 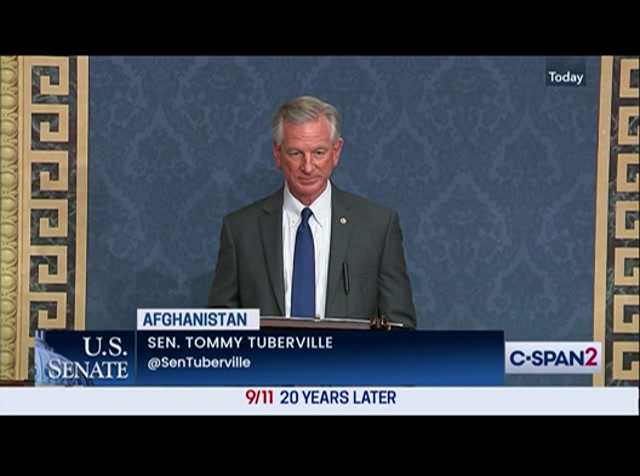 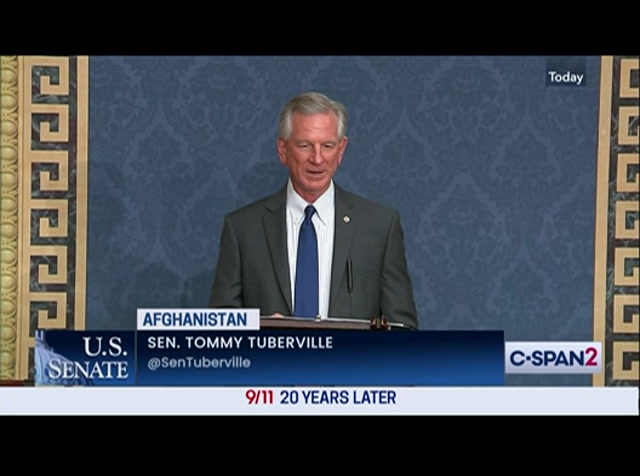 it doesn't make sense. that is why they fight. we do not leave people behind to the soldiers, sailors, marines. i promise you this we will get answers from this administration. if you remember the military or you've served the nation and you have questions, i hope you will reach out to my office. i'm ready to be your voice. i'm ready to fight for your answers and accountability. i want to thank chairman reed and ranking member inhofe for scheduling hearings so that we can do just that in the next few weeks. and on september 11th, in
9:53 pm 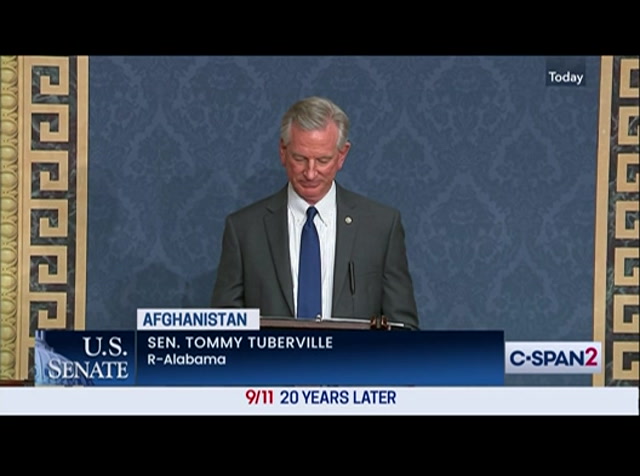 america said never forget. thousands upon thousands of americans have taken that rally cry to the enemy. to them i say america has not forgotten. we will never forget. we will answer the fight and we will fight for these answers. madam president, i noticed the absence of a quorum. ♪♪
9:54 pm 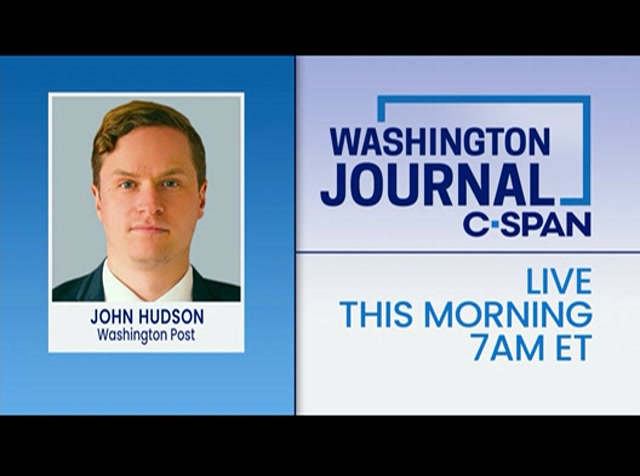 the world has changed in fast internet connection is something no one can live
9:55 pm 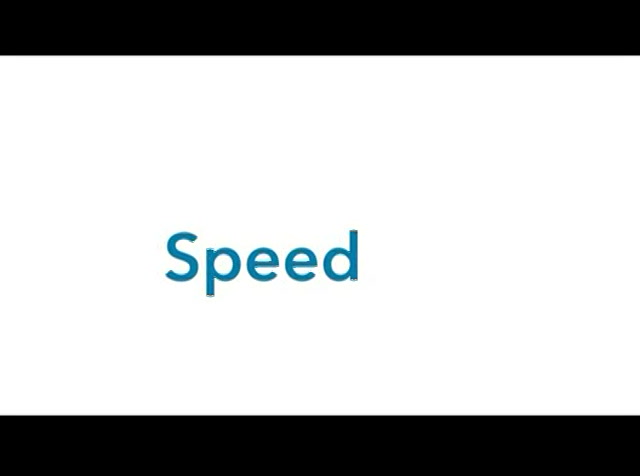 without so we are there for our customers with speed, reliability, value and choice now or than ever it starts with great internet. while supports c-span as a public service along with these other television providers, giving you a front row seat to democracy. now more from the senate floor with remarks from republican senators john barrasso of wyoming and marsha blackburn of tennessee. as well as main independent senator angus king on the u.s. withdraw of military forces from afghanistan and the 20th anniversary of the september 11 terroristth attacks. thank you madam president. i come to thet, floor today to y tribute to the life and service of lance
left
right
Borrow Program
tv

Senator Tuberville reflected on the 20th anniversary of 9/11. He also discussed the situation in Afghanistan.