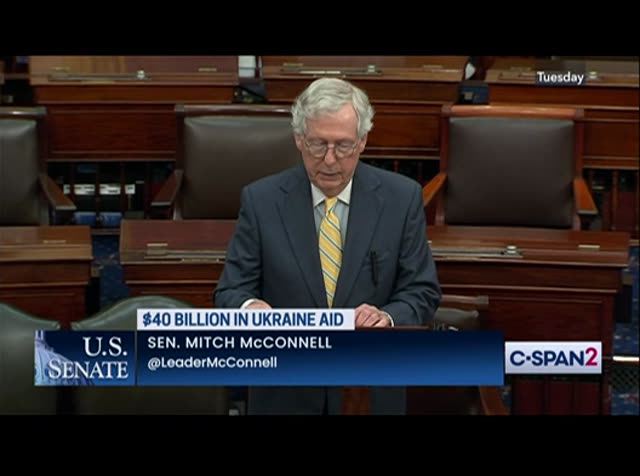 security interest in europe. i'm proud of these brave men and women deploying in moments. and to make the peaceful allegations to our sovereignty and strength in europe and proud of the entire fort campbell community to keep them well prepared for this mission. >> now, ma madam president, it's been a sorrowful, painful few days for the people of new york. i joined with the president, first lady, governor hochul, senator gillibrant and other local officials to meet with relatives of those killed where the supermarket where it happened and to grieve with the community that's been ripped apart by unspeakable violence. there is no single word to encapsulate what it was like to
9:51 am 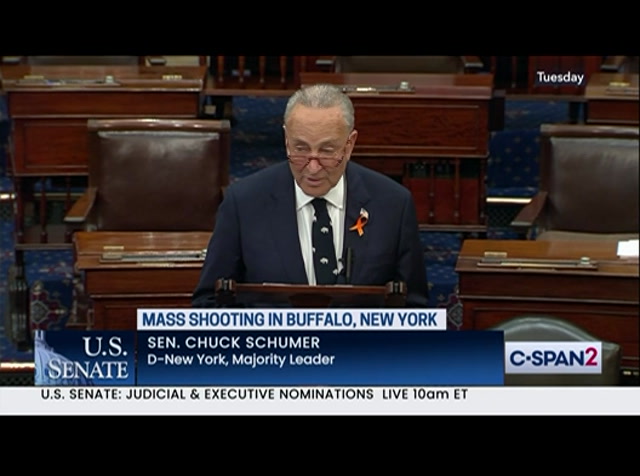 visit the tops supermarket, to lay down flowers in honor of the dead and to meet the families whose lives have been forever, forever torn apart. it was equal parts sorrow for the innocent victims we've lost, it was grief for the families that must carry on. today i met a young boy only three years old who lost his dad on saturday because his dad was at the store buying his kid a birthday cake. it was also anger that somebody could act with such horrible evil. and yet, despite all that, it was hope. hope that somehow, some way, this beloved community will find the will and the grace and the courage to cohere. i know in my heart of hearts that they will. to the people in buffalo i met
9:52 am 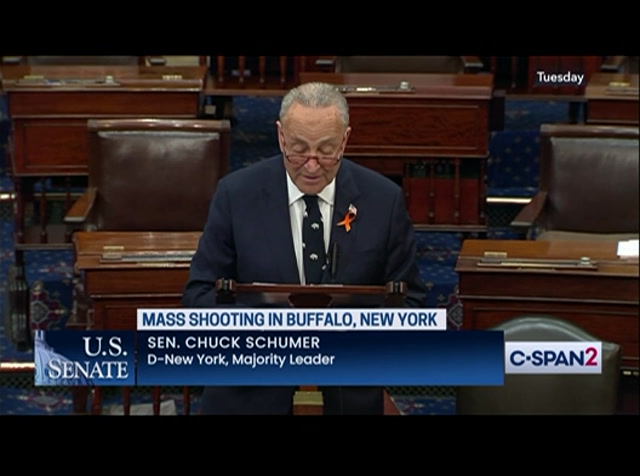 today, i'll say this, all of new york and all of america, stands with you in this hour of deep darkness. we love you. we hold you in our hearts. and we pray for each and every one of you. we will be with you in spirit at every prayer service and every march and every moment in time. today we're all buffaloians. i don't know what would bring someone to bring violence, i don't. but what we know is that each passing day-- new in each passing day, new frightening details emerge for the lengths the shooter chose to attack. and chose top supermarkets in order to target as many black americans as possible. it's a supermarket i know well. i helped bring it to the east side decades ago because there
9:53 am 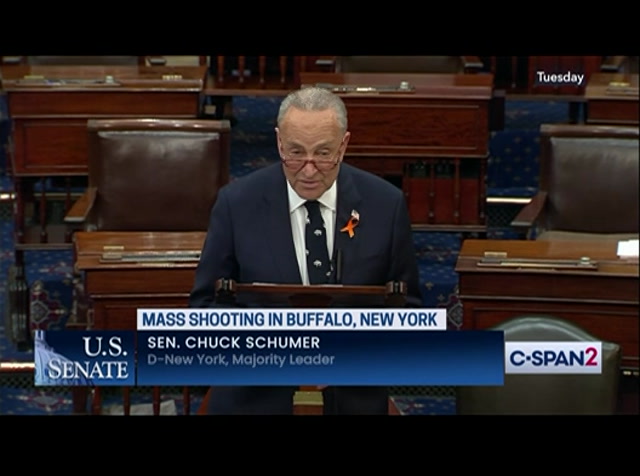 were a food desert and they needed a supermarket. and i persuaded the owner of tops to bring one. through the years, it's not just a supermarket, but a community convening place. when this awful man went to tops to shoot-- to do his terrible shooting, it was like putting a dagger in the heart of community because the supermarket had meant much more than a supermarket. >> and we know through online posts, that the terrorist, that's what he could be called. could have visited the tops markets months ago to mark out the store, and the security guards and even to find a parking spot. we know all that. we know that he had gotten away, had he gotten away, he intended to carry out more shootings at another store and one other thing we know, madam president, we know that his
9:54 am 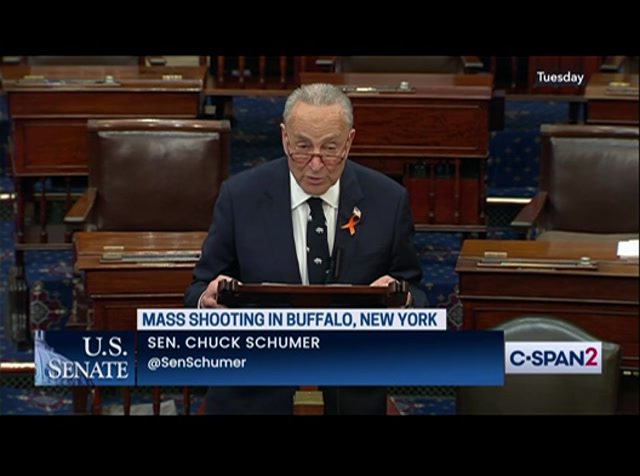 reprehensible views, his racist, white supremacist views belong to an extreme ideology of hate that's increasingly finding home in the american mainstream. in buffalo the president was right to strongly condemn these views, all elected officials should do the same. the great replacement, replacements here used to be something found only in the darkest corners of deranged minds and in the deepest trenches of the internet, but today, sadly, indisputably. you don't have to go online to find the white theory replacement rhetoric. you can find it on cable tv from your own couch. perhaps no network has propagating or normalizing
9:55 am 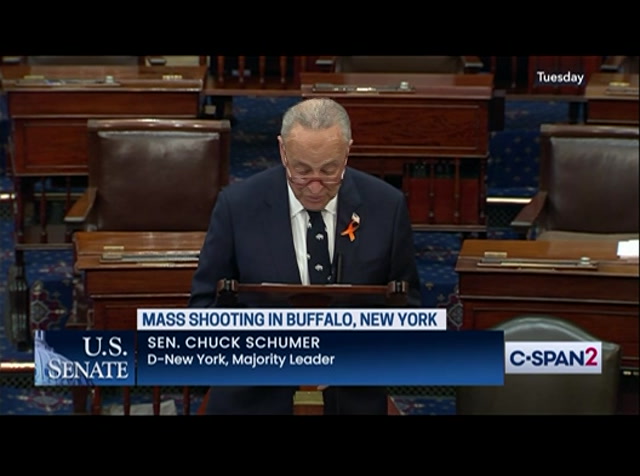 replacement theory than fox news. the follow-up from my remarks yesterday, this morning, to follow up from my remarks. this morning i sent a letter to rupert murdoch, to fox news executives and tucker carlson imploring the network and mr. carlson to cease replacement theory on their network. according to one study mr. carlson has used replacement theory on 400 episodes of the show, 400 episodes which has a nightly audience of three million people. it's dangerous and un-american for one of the biggest news networks in the word to amplify conspiracy theories eerily cited by the buffalo shooter. to those who think this is an exaggeration, for those who refuse to acknowledge that
9:56 am 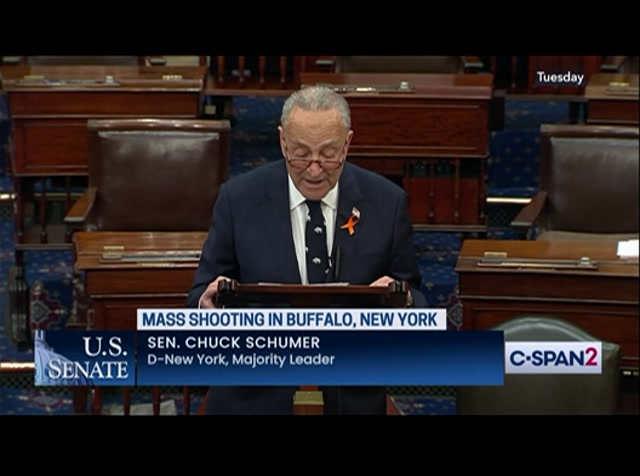 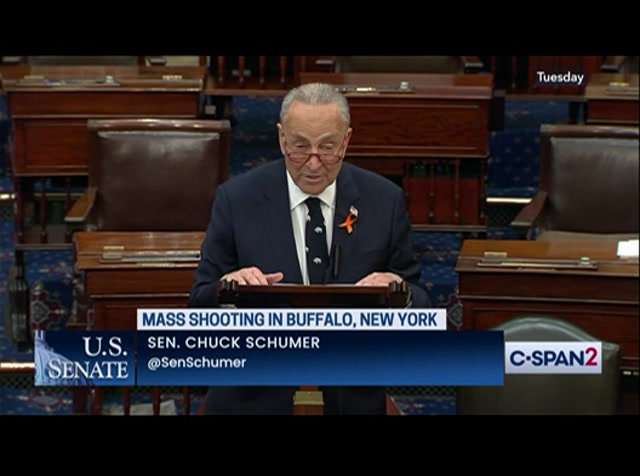 store in buffalo, new york. it would be the easiest thing in the world to denounce something as evil and vile and un-american as replacement theory. to its credit this week the wall street editorial board, politicians and media figures have an obligation to condemn notions as white replacement theory. while that's necessary, it's hardly sufficient and too many maga republicans refuse to do even just that. and last night, tucker carlson did not do that either. he deflected and refused to acknowledge that a clear connection exists between the messages on his shows and some of the views championed by the mass shooters. he dismissed the 180-page rant as the disease and unorganized mind while admitting that the
9:58 am 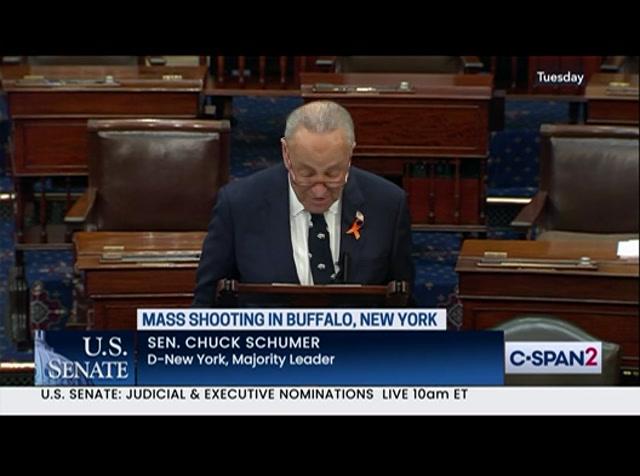 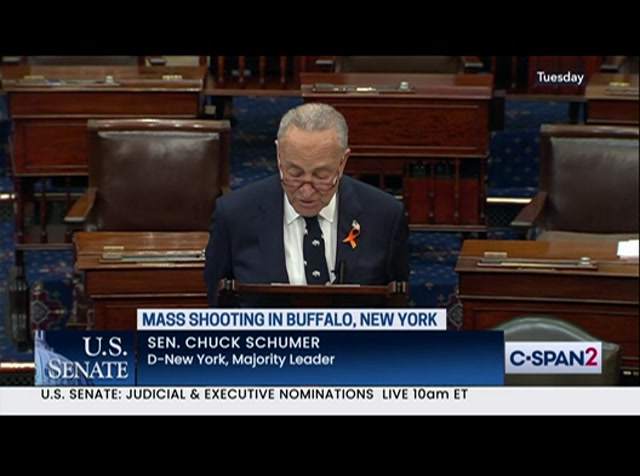 political spectrum should not just denounce white replacement theory, but refuse to give the false conspiracy theories a platform whatsoever. it is horrific to see that most on the hard right haven't done that to date. until we unite to stop views like replacement theories out of existence. until we ban together to call the vile conspiracy theories to what they are, propaganda, and what we saw in buffalo, new york. communities across the country, especially communities of color will continue to live in fear at any moment they may be targeted by violence just because of who they are. i yield the floor. >> senate lawmakers working on senate and judicial nominations and continue on a bill to provide $40 billion of aid in
10:00 am 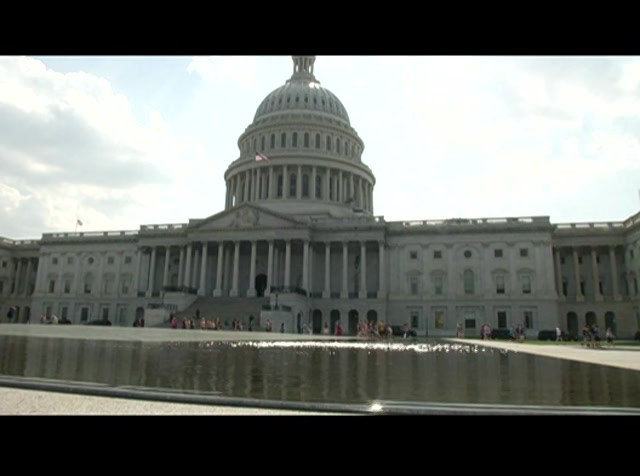 ukraine in its conflict of russia. a vote on passage of that bill is expected on thursday. live coverage of the senate here on c-span2. the presiding officer: the senate will come to order. the chaplain, dr. barry black, will lead the senate in prayer. the chaplain: let us pray. almighty god, our strong tower,
left
right
Borrow Program
tv

Senate Majority Leader Schumer spoke on the Senate floor about his trip to Buffalo with President Biden to honor the vicitms of the recent mass shooting there.