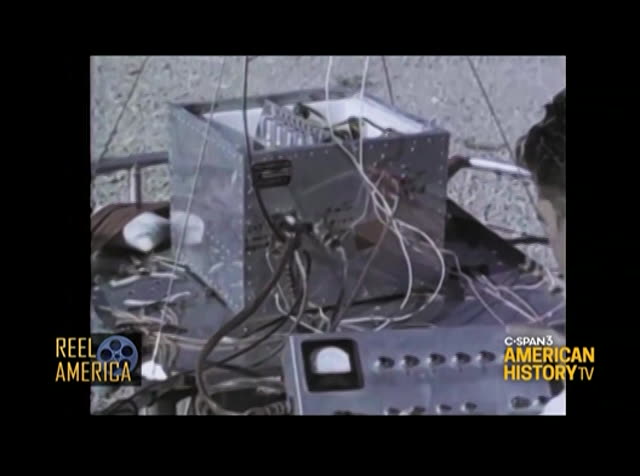 space-age technologies. payloads ranged from simple radio tarranc transmitters to nasa space probes. announcer: learn more about the roswell reports tonight at 10:00 p.m. eastern, 7:00 p.m. pacific on american history tv. the c-span cities tour explores the american story. since 2011 we have been to more than 200 communities across the nation. like many americans our staff is staying close to home due to the coronavirus. next and look at one of our city tour visits. ♪ >> the battleship missouri, battleship becomes
12:36 pm 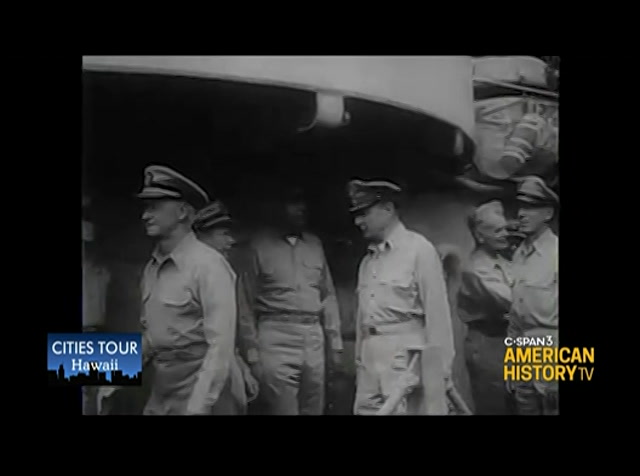 the scene of a ceremony marking the surrender of japan. in the bay of tokyo itself, destroyer buchanan comes alongside, bring you representatives of the allied powers. general of the army douglas macarthur boards the missouri. the fleet commander and admiral halsey welcome the chief of staff, general sutherland, aboard. the escort general macarthur to the grand deck with a 20 minute ceremony is to take place. 2, 1945.day, september ♪ [indistinct chatter] level or on the 01 veranda deck. we now call this deck the surrender deck.
12:37 pm 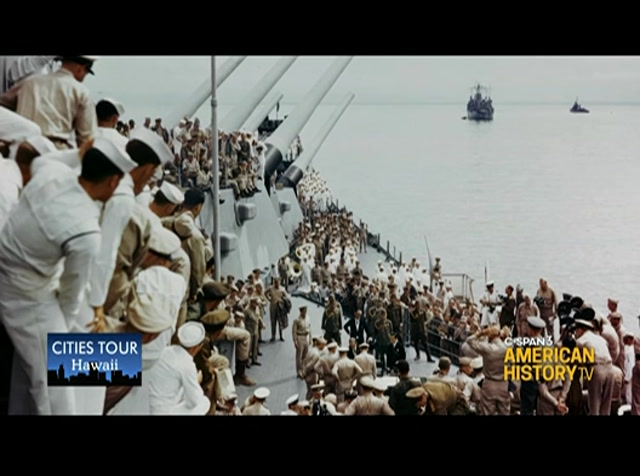 this is for the japanese assigned the unconditional surrender ending world war ii. this part behind me here is where the table sat. the ship looked different. the shady canopy was not installed and the tourette was turret was terret was rotated 30 degrees to make more room. you would find the crew of the crews hangingther on trying to get a glance of what was happening. members of the japanese delegation were making their way on board. there were 11 of them and made the way of the latter behind me. 9:00 in the morning the ceremony got started. after a few opening words the first design would have been the japanese delegation.
12:38 pm

than the japanese military. the third person to sign was general douglas macarthur himself. he did not actually represent the united states. that would be the fourth person, admiral nimitz. ussr,hina, great britain, canada, new zealand. there are two copies because one was to be kept by the united states and the other by japan. we do not display the original for obvious reasons. we have replicas on board. the originals are in washington, d.c. and a war museum in tokyo. we have a replica of one of macarthur's pens. he used six design. he only had to sign twice, but instead he chose to use six pens for douglas, mac, and arthur. he did this for a simple reason
12:39 pm 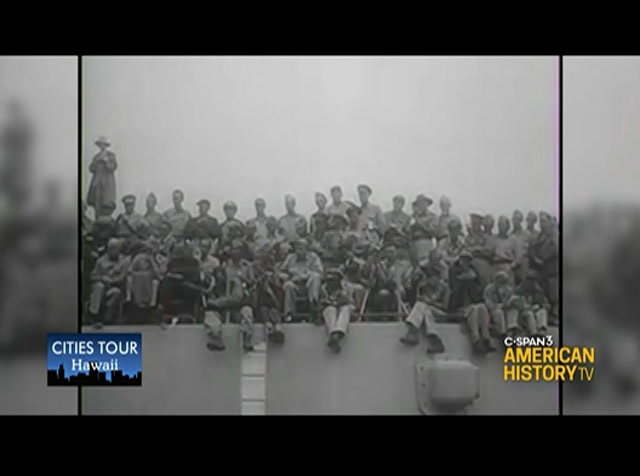 and one that we still do today if you look at lawmakers. when he wanted to do was to get these away as souvenirs. following the last signature he stepped up to the microphone and said, "these proceedings are closed." he gave a signal in over 1000 aircraft flew information about the craft. from the beginning of the ceremony to the end, 23 minutes is all it took to end the bloodiest conflict in human history. ♪ we are back on the uss missouri and have come to recognize this part of the ship for an event that happened in world war ii. it is a touching event and tells you a lot about the ship and its crew, particularly the commanding officer. the battle of okinawa the missouri saw herself under, because the attack. -- kamikazi attack.
12:40 pm 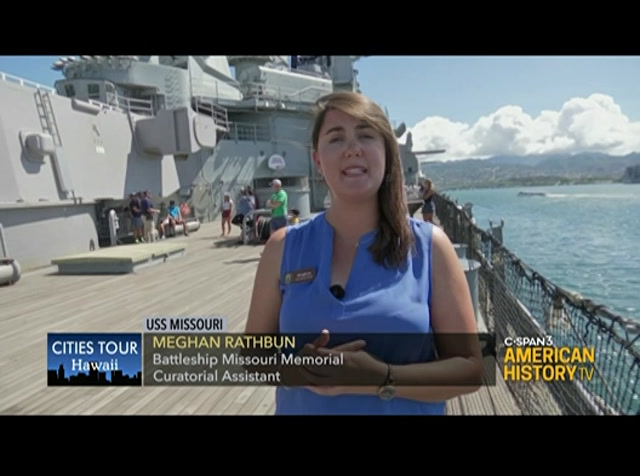 the word dates back to the 13th century when japan found itself under attack by mongolian fleet. that fleet was wiped out twice by a typhoon. this was due to divine intervention so they called it kamakazi, divine wind. they called on this again to save them from the threat. yardslot was spotted 7000 off the battleship missouri's starboard side. he came in low. her five inch guns took up firing, hitting him a few times, but still he came. 42 he's in to the missouri where you see these mooring bi
12:41 pm 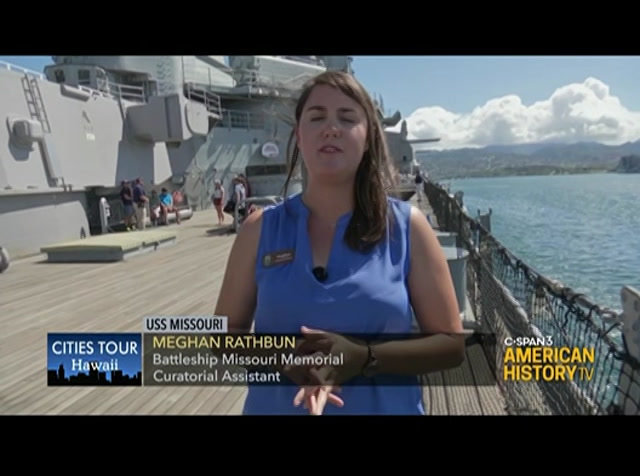 ts. the left wing of his plane, the 500 pound bomb, and history/fell into the ocean -- fuselage, fell into the ocean. the right wing flew onto the missouri and spilled wreckage as far as the surrender deck and ignited a huge fire. other ships thought she was thinking. but her crew was so good and fast in their response. they managed to put the fire out in minutes and did a headcount and found no one from the crew had been killed and there were only minor injuries. as they began to clean up the wreckage of the wing and parts that spilled onto the deck they found the body of the pilot. callahan, the first commanding officer, after finding the body made the order to take the body below deck to prepare for a full military funeral. you can imagine members of the missouri were not happy, but they respected their commanding
12:42 pm 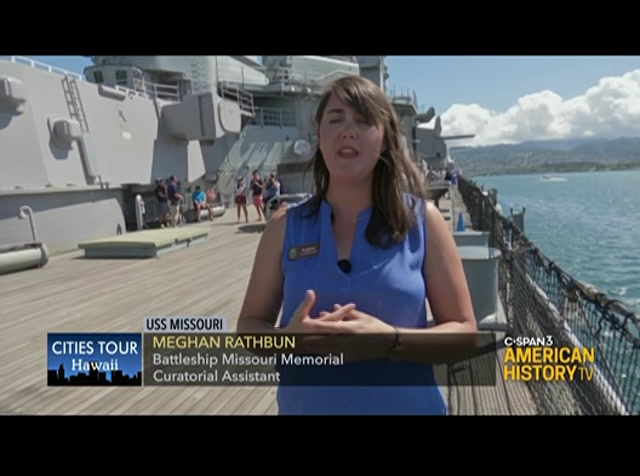 officer and follow through. that night several members of japanese hand sewed a rising sun. you must be buried beneath the flag of your country for a military funeral. the next day on the deck behind me there was a funeral held for the pilot. six men stood holding the body of the pilot with a bugler and chaplain. at 9:00 in the morning they committed his body to the d. eep. not many have heard of the story and the reason no one has heard of it is because it got no press coverage. no one talked about it and that is because the day of the funeral is the day harry s truman was sworn in. we are inside the captain's cabin.
12:43 pm 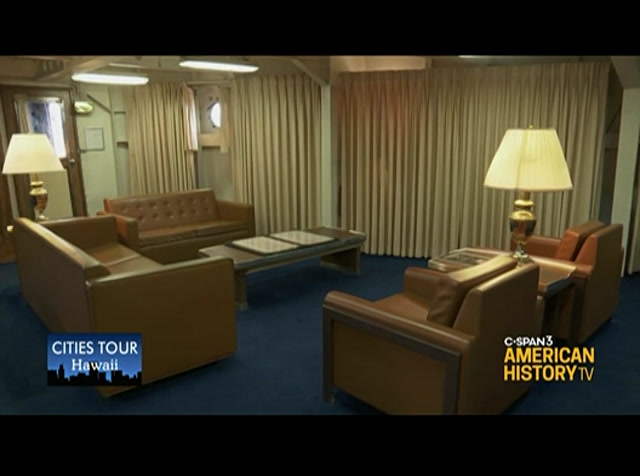 it is well decorated and for the captain of the missouri when the ship is import specifically or he is visiting dignitaries and needs to act as a diplomat. large part of the collection has been donated by former crewmembers and spans to the turn-of-the-century with the original battleship missouri all the way to modern-day with the current uss missouri submarine. we have pulled out some artifacts for display. the two you see here are important pieces of history. they are both fragments of the plane that hit the missouri in 1945. the piece on the left still has factory paint while the piece on the right was taken by a crew member and painted. you have very different pieces of that plane. they both ended up back in the missouri.
12:44 pm 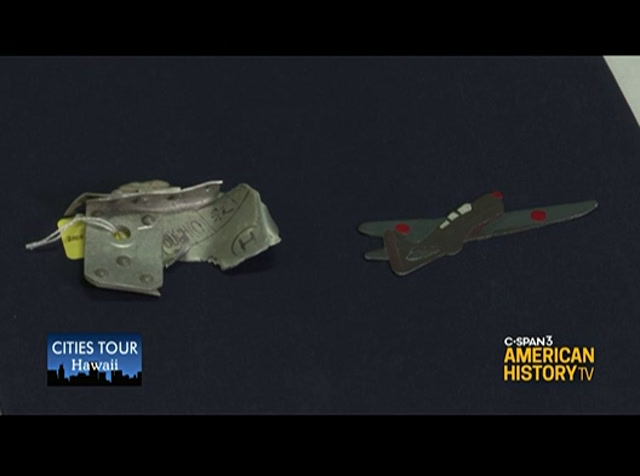 the next few things we have on display here are from the kamikaze attack on the missouri. these two artifacts are two pieces from something larger and they were both recovered by two members of each division, which is the medical division on board. when captain callahan gave the order after the attack to take the pilot below to the dispensary that brought the body down and prepared it for funeral. processpoint in that the commanding officer of that , came uponr. lampson two fragments of scarf and we have them here. this oneite small and from the medical officer is quite large. bear the same
12:45 pm 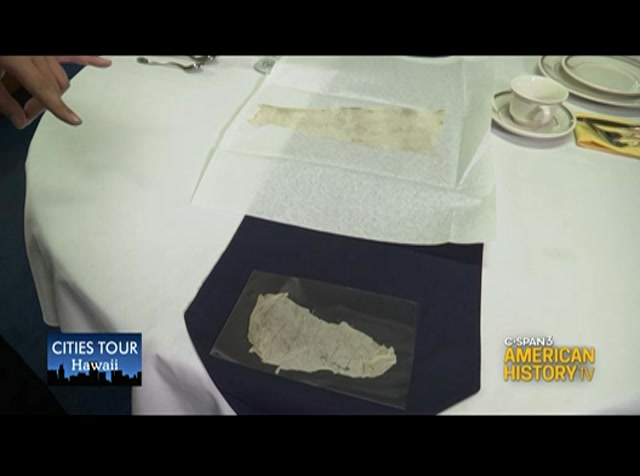 pattern. it is a faint floral pattern in addition to the oil. they are two of the most fragile artifacts and in the coming year, as we redo our display for the 70 for the anniversary of the attack, one of these will actually go on display to the general public. we tend to keep them in a climate controlled area. one of the most important set of artifacts we have on board the ship are surrender cards. they were given to crew of the missouri who were on board for the surrender ceremony as a way to verify and for them to prove they were on board. each one is signed. if you look closely, it is signed here. this is signed by the fleet admiral. you also get the captain and standing officer, murray,
12:46 pm 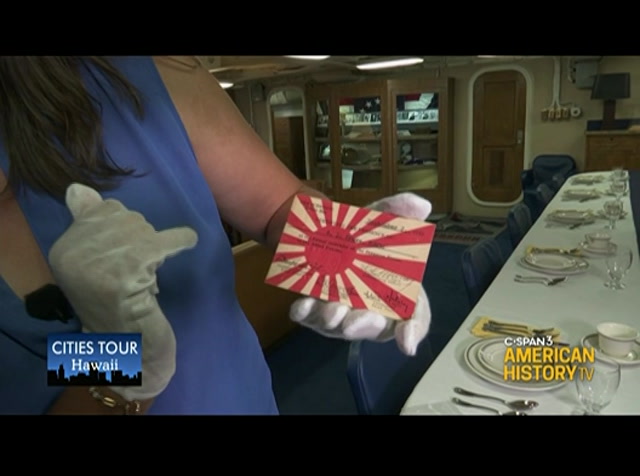 douglas macarthur, and bears the name of each individual crewmember. them.y have a handful of they are incredibly rare and incredibly important to telling the story of the surrender aboard the missouri. the next two documents show the timing for september 2, 1945. the record each person coming on board from nimitz, to macarthur, to the japanese crewmembers and when each person as ship leaves. 9:25 andmony ends at japanese officials have left by 9:29 in the morning. one thing in the collection is the plans of the day. they detail everything that will happen on board down to exact times.
12:47 pm 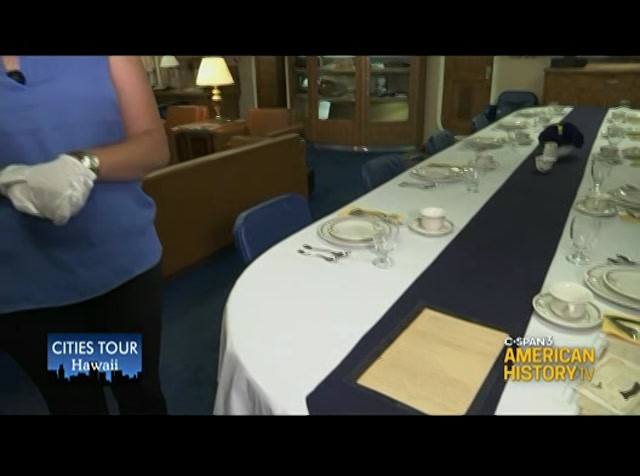 we have one from august 30, 1945 which bears the line written by the ship's second-in-command, commander leon, that is incredibly telling and bears the weight of what was about to happen. it says, "we have the energy, ability, and strength to prepare for and put on a glorious show for the grand finale. if each of us does all he can in this last push, then, as i said long ago in newport, whenever grandchildren gather around and say, what did you do during the great war? we will all answer simply, i was on the missouri." missouri isbow to bow with the uss arizona. the final end of world war ii was the surrender ceremony
12:48 pm 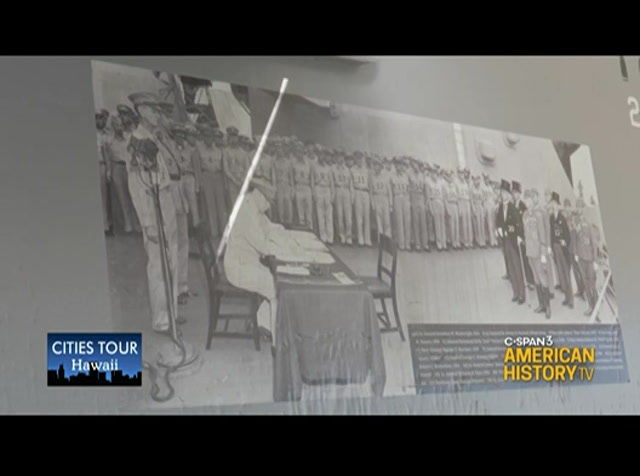 aboard the missouri. by having the missouri sitting in pearl harbor we have the book ends of world war ii. the beginning on the arizona and the end on the missouri. as she sits with the arizona the missouri's 16 inch guns pointed over the ship, she stands watch over the sailors entombed in the arizona's hull. announcer: you can watch this and other programs on the history of communities across the country at c-span.org/city tour. this is american history tv only on c-span3. announcer: you are watching american history tv. exploring our nation's passed every weekend c-span3. this week we are looking back to this date in history. 1957 -- her 24th, --ember 24,
12:49 pm 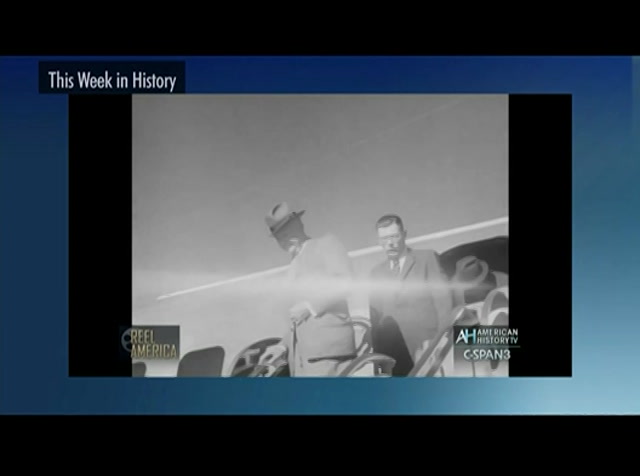 >> disorderly mobs have prevented the carrying out of proper orders from a federal court. under the law i issued a proclamation calling upon the mob to disperse. this morning the mob again gathered in front of the central high school of little rock. obviously for the purpose of again preventing the carrying out of the court order relating to the admission of negro children to that school. announcer: follow us on social media.
12:50 pm 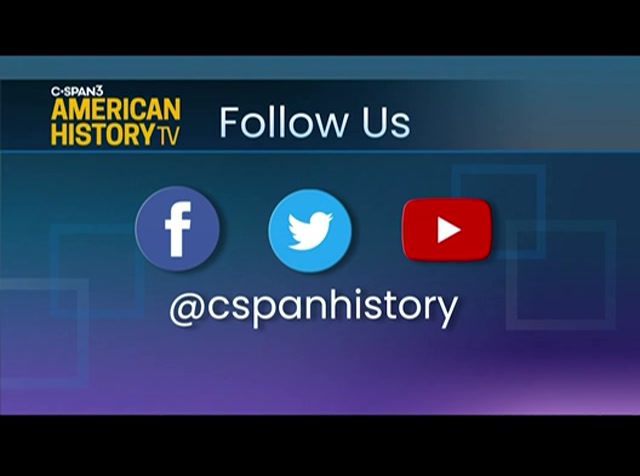 1862,cer: in october confederate cavalry under general jeb stuart pressed into maryland and pennsylvania to raid for horses and other supplies. editor sarahging kate byerly talks about this and the union response. the talk was part of a symposium on the war in the east hosted by the emerging civil war blog. >> welcome to the emerging civil war symposium. i am chris murkowski. thank you for joining us in person and online. before i introduce our next speaker, i went to give a shout out to those who made today possible. our technical director, chris weiss. thank you to our symposium coordinators kevin pollock and dan welch.
left
right
Borrow Program
tv

The C-SPAN Citiies Tour visited Hawaii to learn about the history of the state from local experts and historians.