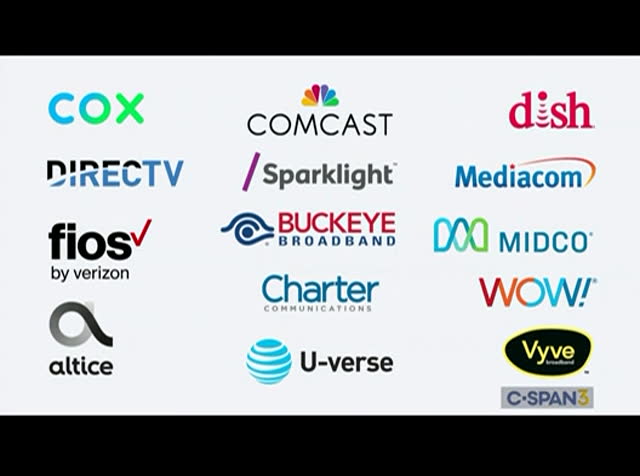 here to an upland village in the
7:40 pm 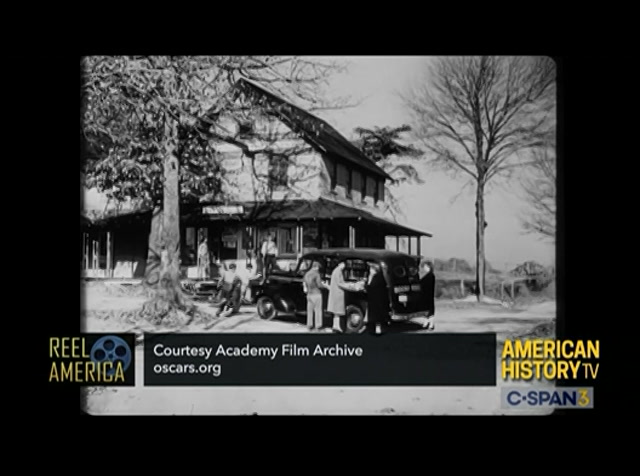 state of virginia the first tuesday in every month. there comes a truckload of books. the traveling library has many friends among these remote farming people. the free book service provides them with a much-needed link to the world beyond their hills. the librarian has her friends too. they want to know whether the story has a sad ending or they need a help with a strange word. copyright that's not very strange tim. you'll find it. most any book you open? it means that for 28 years no one but the books author or publisher can copy anything from it. it means well, let's see. have you ever heard of the library of congress tim? this book tells all about it? it's the most important library
7:41 pm 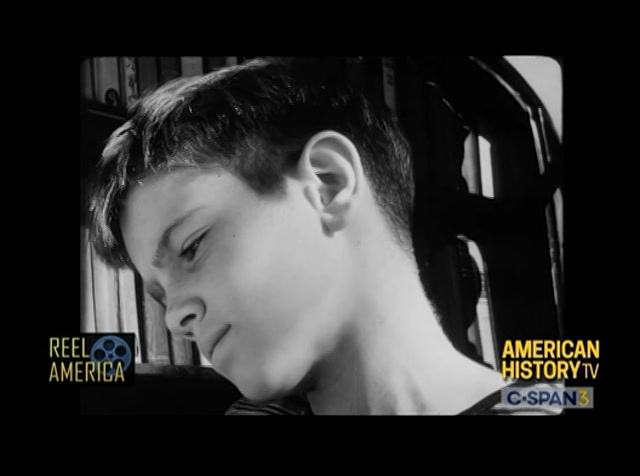 in the country. and what are the things it does nowadays is keep records and proofs of all the copyrights that are issued by the united states. two copies of almost every book that is published are sent to the library at washington. at washington directly opposite the capital in which congress meets? the grandiose building that is america's citadel of the written word. and arsenal in the battle against ignorance a monument to the ideals of free expression and free thought the library of
7:42 pm 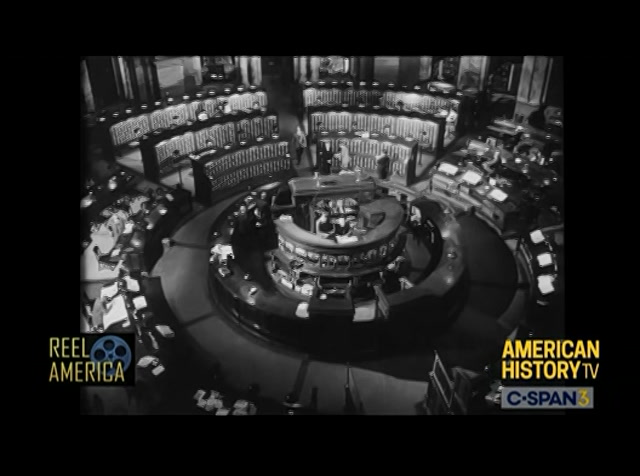 congress was first established for the exclusive use of the men who made america's laws. brought it as since become the nation's reading room opened to every man. surrounding the main reading room with a stacks of general reference books. to which the reader can come directly for the volumes he wants. but in a library containing nearly six million books and pamphlets only a small proportion can be kept at arm's length. the rest are stored in great stack rooms where modern air conditioning is eliminated the traditional must and dust the housing of a great and diverse collection of the materials of scholarship presents many technical problems. the library of congress must have files for its million and a half maps. portfolios must be provided for more than half a million prints. and cases are needed for the changing display of selected groups of pictures.
7:43 pm 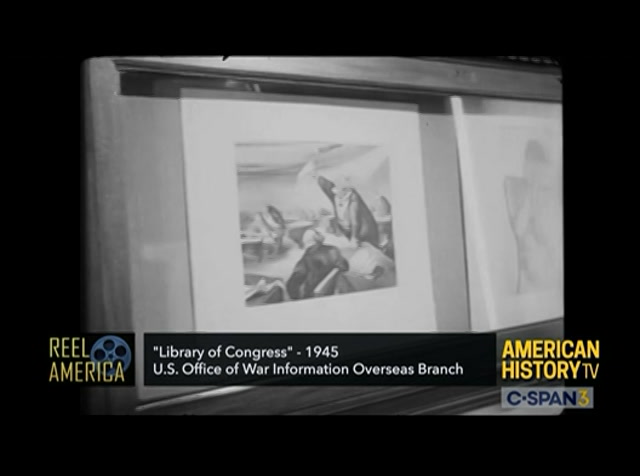 the oriental division requires still other special facilities students come from all over the world use this collection, which is the largest of its kind outside of asia. but naturally the library is richest in the source materials of american history. a history that is unique in having been lived entirely within a period for which there are written records. a history that is first told in many languages. the history of new indies new france you holland, new england a history of many races including one that was nearly extinguished in the writing of the history. for in the 16th century. it was a history of conquest of new lands that were taken in the name of god, but plundered in the interests of men.
7:44 pm 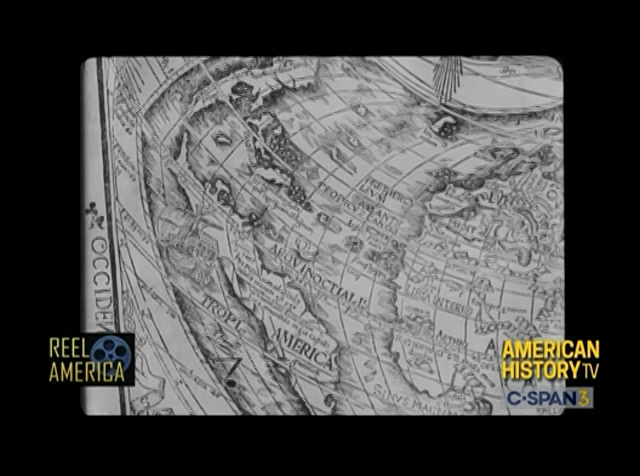 it was to take another 200 years to bring forth a nation in this new world. conceived in strafe and bloodshed but born in the image of men's dreams. the library has the words by which the dreams were made realities. and pictures of the dreamers who were later called statesman. jefferson franklin george, washington these are the records of a nation in labor. its progenitors its heroes. and this the fruit of their struggle the articles of confederation was a blueprint for a republic. the bill of rights a set of rules by which the people of the new nation might live in peace and personal freedom a freedom enjoyed today by millions whose grandfathers were not even born when this ink was wet. the union was once bitterly attacked and had to be defended.
7:45 pm 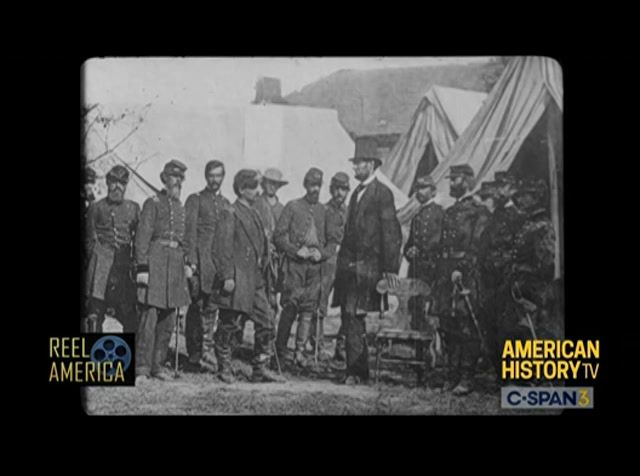 men like abraham lincoln arose from the people to lead the fight with inspired courage and great wisdom. they too are authors by their words and deeds they wrote the history today preserved by the library. new methods of recording history brought new media to the library's collections these are prints of the earliest newsreels. in this old sequence. we see a parade in north africa honoring mr. roosevelt. but this roosevelt is theodor roosevelt and the occasion his goodwill voyage in 1910. here are preserved the personalities of the men who have guided the destiny of the nation until represented the united states in the councils that shaped the modern world the mementos of leaders like wilson will be of interest to students of our countries as long as history is written and read.
7:46 pm 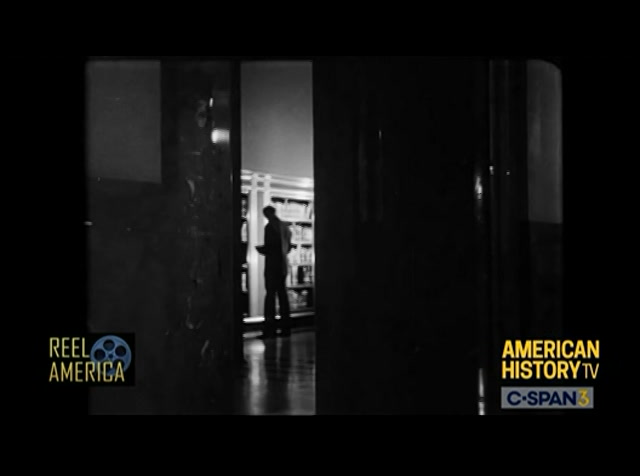 but the library of congress is more than a mere treasure house. recognizing the fact that the use of the books is more important than the possession of them. it is sought to provide every facility that might ease the task of the trained researcher or the ordinary reader. key to the entire system is the main catalog a complete detailed list. of the millions of books in these trays there are over 16 million signposts to help the reader find exactly what he's looking for.
7:47 pm 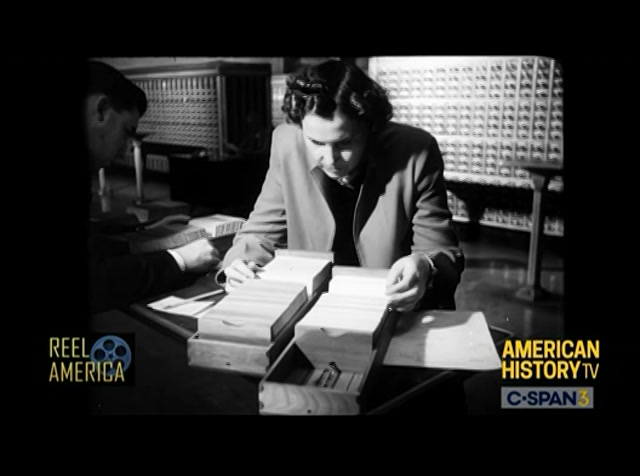 in recent years there have been many visitors from distant countries where the right to read has been denied to men because of their politics their religion or their race. and in these files they've been able to find the books that tyrants have tried to burn and and banished from the face of the earth. hear the heritage of our culture is available to anyone who would reach for it.
7:48 pm 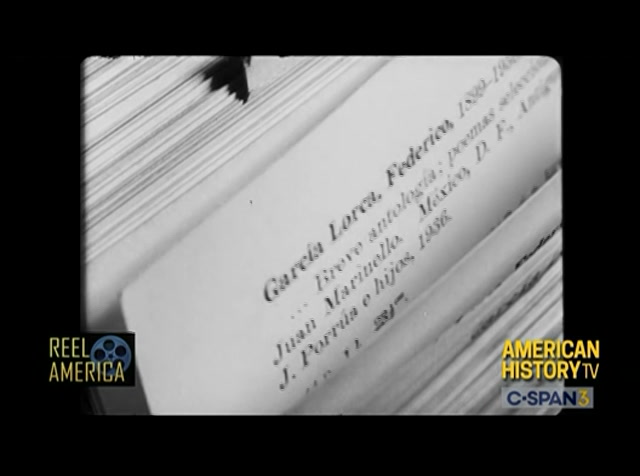 the library prints the reference cards not only for its own catalogs, but also to send to other cities and other countries where depository libraries are located. most countries take advantage of this system and a large number send their own cards back to washington. and so work of the library is carried beyond its walls. in a very process of organizing knowledge it functions as a creative force. a strange treasure house whose guardians feel most successful
7:49 pm 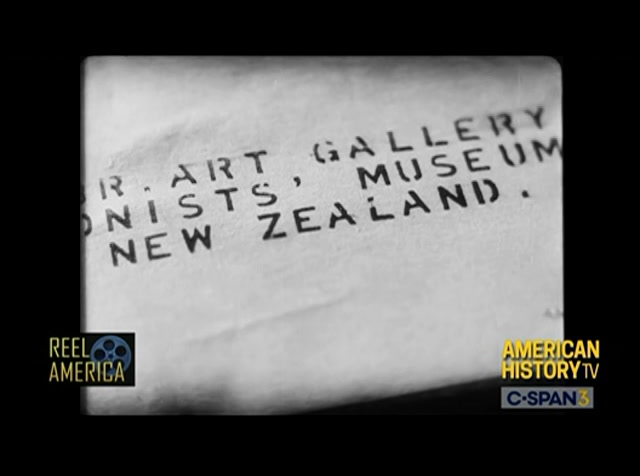 when they are sharing the treasure with the whole world? consulting the cards is the first step in the process of getting a particular book from the 414 miles of shelves. after the request form is filled out. the rest is almost automatic. here here here here in the rare
7:50 pm 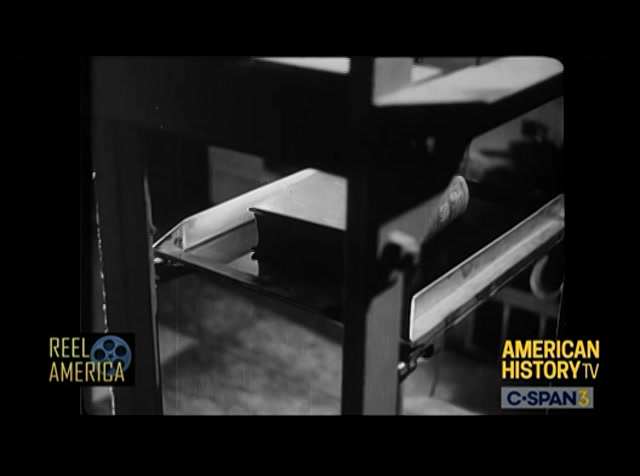 book rooms properly identified experts retouch and turn the pages of volumes lettered by hand in the middle ages. or scrutinize rare examples of the earliest printing the gutenberg bible has become a
7:51 pm 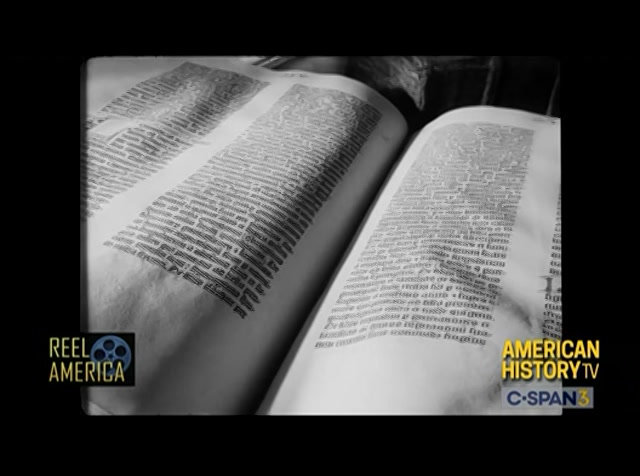 symbol of the technical developments that eventually made reading possible for the common man. five centuries later other developments gave reading to those who so badly need the opening vistas of books, but who cannot see the printed page? i lost a world the other day. has anybody found? you will know it by the role of stars around its spotted bone. a rich man might not notice it. it to my frugal eye of morris team than duckets today the library provides talking books for the blind readers. and the library puts sound recording to many other uses. musicians and sociologists can now study american folk songs that have never been transcribed and would otherwise be lost if the library officials did not go into the field to record unknown
7:52 pm 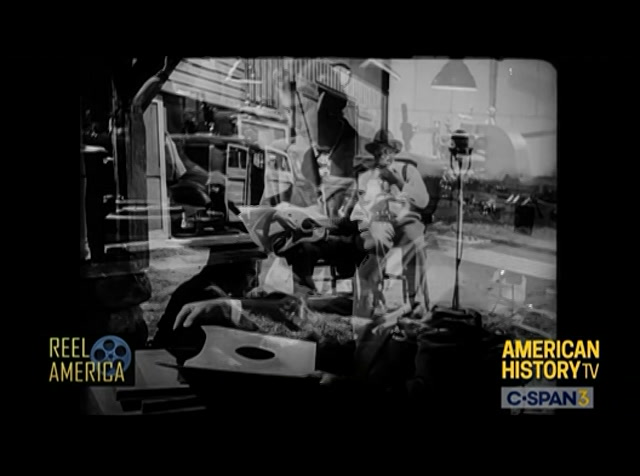 primitive singers. i was wrong to the camp and tell my brother. they're the woman. he's loving show gonna get him killed. but i heard somebody rumbling and then i looked around. was another night of southern time that'll be pulled down. hey, you're not alone. no, no. long rule on roll on red river roll on i'm singing these blues because my love. but the wrestler ler there's
7:53 pm 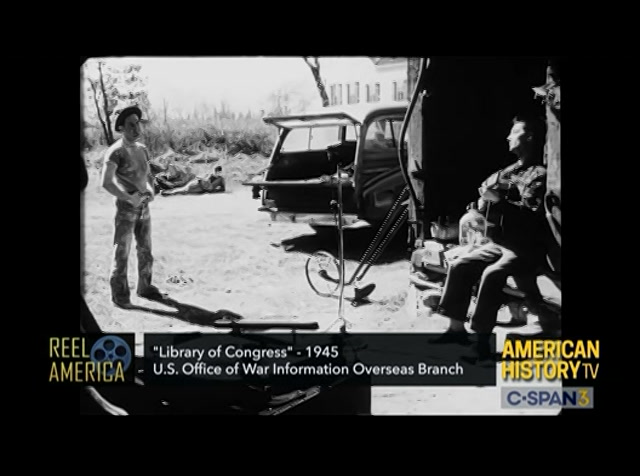 broke on us in the dead eye powers of night. she rose from her blanket a battle to fight. she rose from from her blanket will the gun in each. hand come all you cowboys fight for your land? what the roots of music in america go deep into the past and twist across oceans and continents. the music division of the library can furnish the student with all kinds of materials including priceless old manuscripts. this is the original score of a bach cantata.
7:54 pm 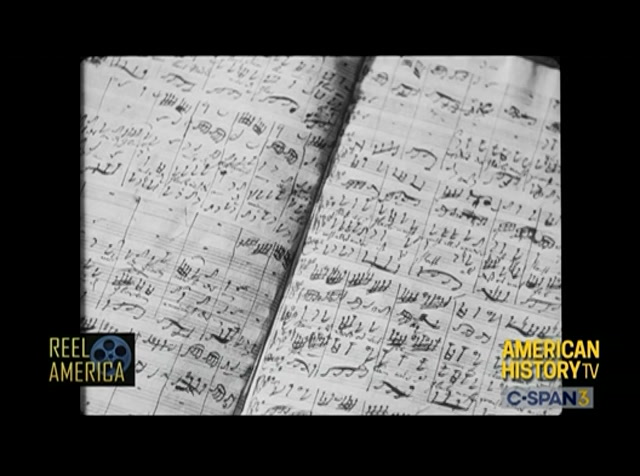 and this some mozart quintet even a handwriting of a composer like beethoven is of interest to scholars. but more important to the pen scratches by which he conveyed his immortal inspiration to the world. this is a manuscript of one of his string quartets. what music that cannot be heard is dead. the library with the help of a few generous patrons gives life to its music collections by presenting eminent artists in regular series of concerts. typical of such occasions is this sunday afternoon performance of the budapest string quartet. playing on the library's
7:55 pm 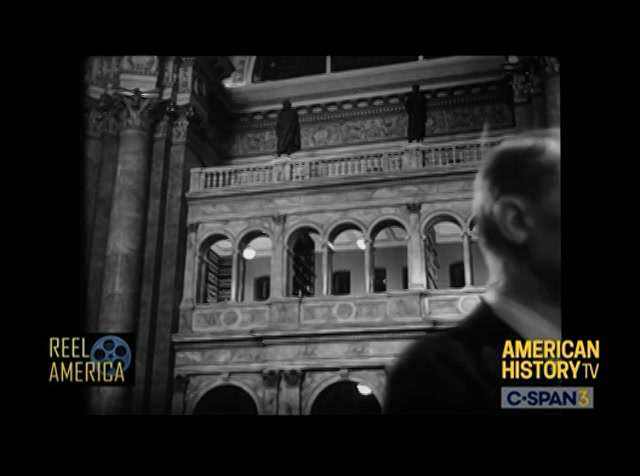 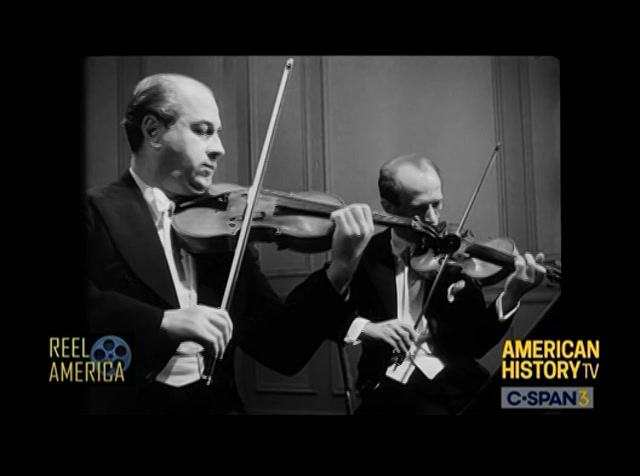 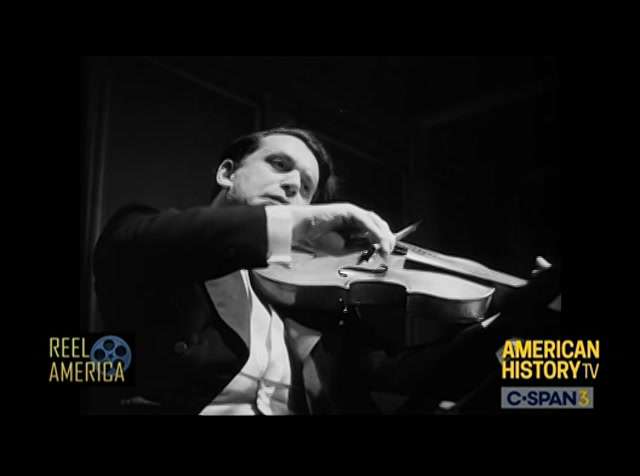 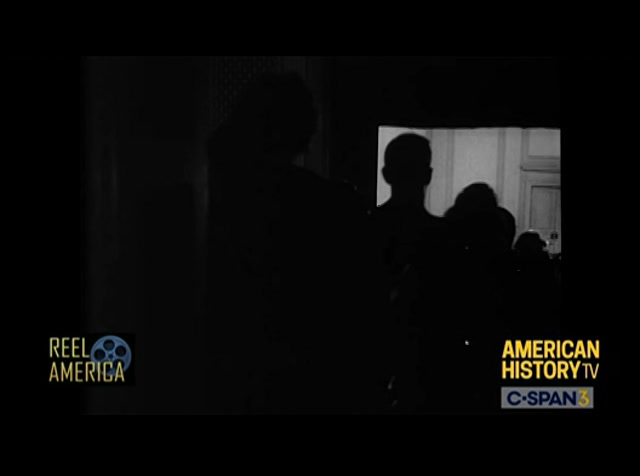 when beethoven was born the united states that today honors the cultures of all nations in these halls of learning had not been founded. this fact gives a special significance to the manuscript of americans prize above all others in the library's collection. the declaration of independence and shrine and a wall where it seen by all who enter this sanctuary of freedom is the earliest statement of american purpose. these people know much of it by heart. we hold these truths to be self-evident. that all men are created equal that they are undowed by their creator with certain inalienable rights. that among them are life liberty
7:59 pm 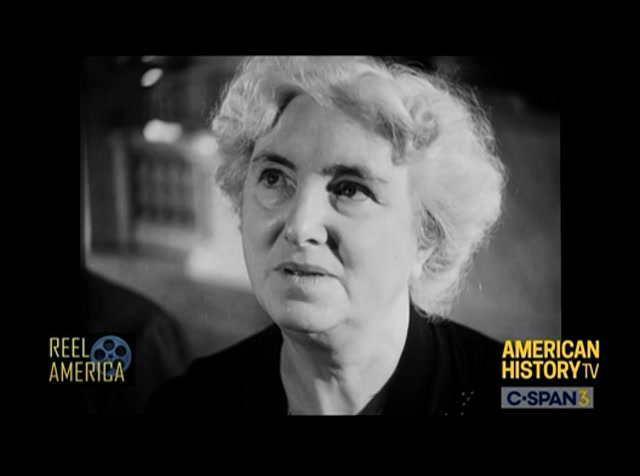 and the pursuit of happiness. thomas jefferson who wrote those phrases 169 years ago and who pledged his life to give the meaning? was one of the founders of the library of congress he knew that democracy must eventually be based on the foundation of an enlightened people. that is why placing facts within reach of the citizen becomes the business of a government. and that is why the first tuesday in every month is so important to our young friend and the farmers in the hills of virginia. you know.
8:00 pm 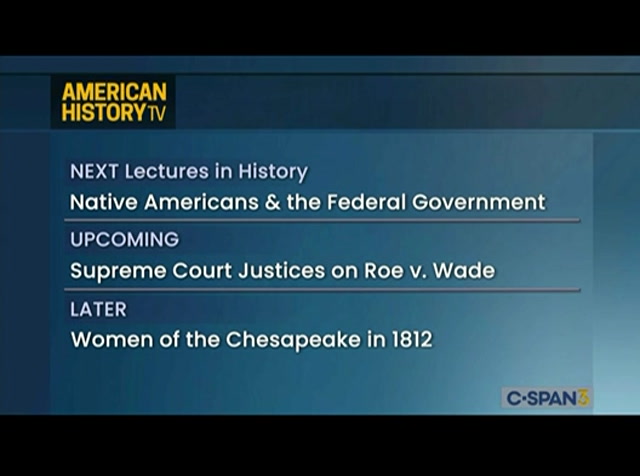 our topic today is we're going to start with our discussion of native americans. this is one of two different discussions. we're having i
left
right
Borrow Program
tv

This Academy Award-winning short documentary takes viewers on a tour through the Library's reading rooms and facilities, highlighting how the institution benefits the public and scholars worldwide. The U.S. Office of War Information Overseas Branch, which included many Hollywood veterans, created this film and dozens of others which were designed to showcase American society and institutions for foreign audiences.