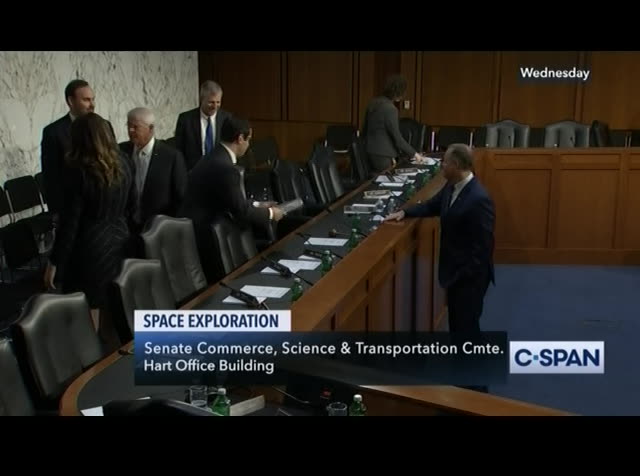 >> on c-span three presidential leadership surveys taken between from woodrow wilson drops six to 11 points and bill clinton rises from 21st to the 15th spot. learn more about the lives and leadership skills of the 44 chief executives in c-span's ". the president's" available wherever books are sold or c-span.org
5:15 am 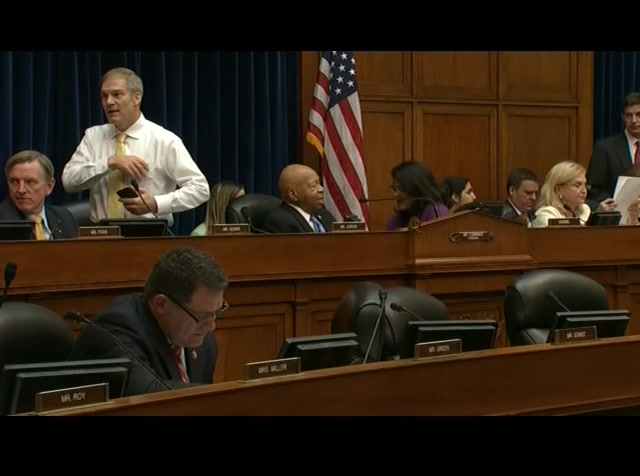 /thepresidents. >> white house counselor kellyanne conway defied a congressional subpoena and failed to testify at a house oversight committee on violation as she violated the hatch act, the law limiting activity. if missummings says conway did not reconsider you will hold a meeting on july 25 to hold her in contempt of congress. here is a look.
5:16 am 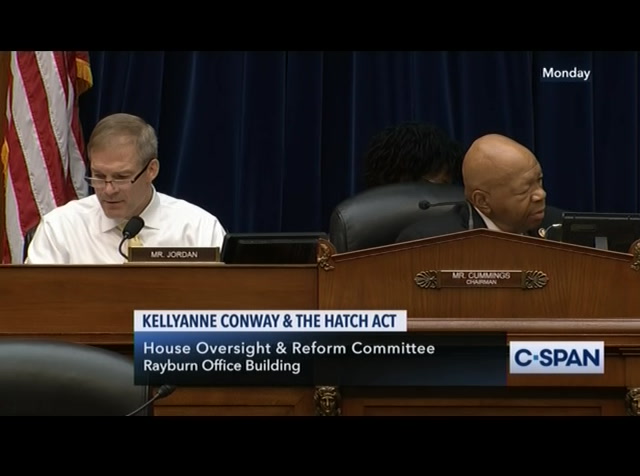 we are convening for part two of the former committee hearing on violation of the hatch act under the trump administrations testimony from miss kellyanne conway . i recognize myself for five minutes to give the opening statement.
5:17 am 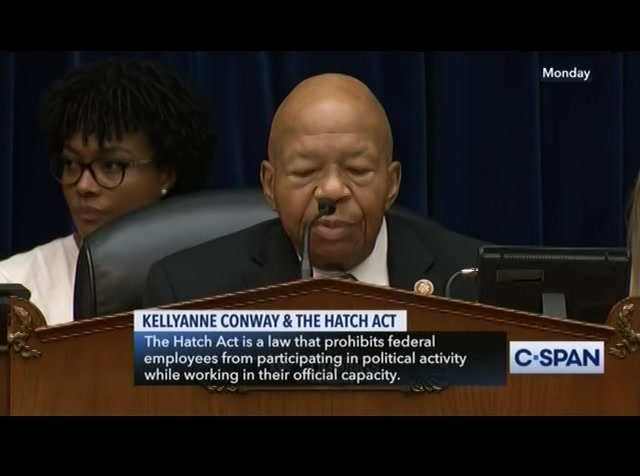 today, the committee was scheduled to hear testimony from miss kellyanne conway , counselor to the president, about her repeated violations of federal law. this is the second time in three weeks that our committee has attempted to obtain her testimony . we invited her to appear voluntarily at a hearing on june 26. she refused. the committee then voted to authorize a subpoena to compel her to testify here today, in defiance of that subpoena, she has again, refused to appear. since she joined the white house in january 2017, she has repeatedly and flagrantly abused her position of trust. in march 2017, the office of government
5:18 am 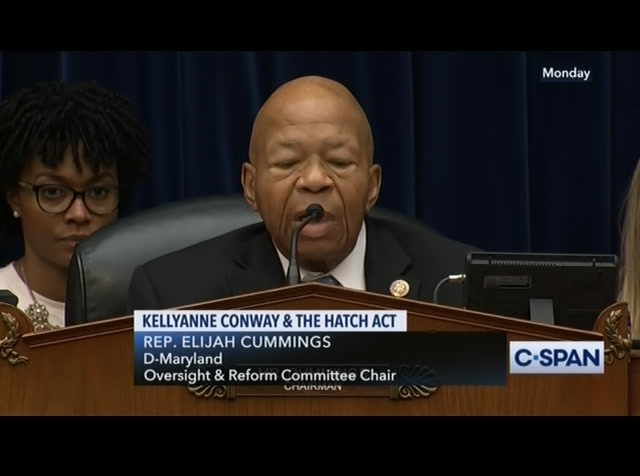 ethics recommended that the white house discipline ms. conway for using her official position to oppose the private -- to promote ivanka trump's private business during fox and friends. holding her -- rather than holding her accountable, the white house minimizes the seriousness of her violation by claiming that this was made in a "light, offhanded mander.". the committee discovered that she wasted thousands of taxpayer dollars by traveling around the country on private jets with former secretary of health and human services tom price. secretary price paid the taxpayers back then resigned. ms. conway refused to reimburse taxpayers and faced no disciplinary action
5:19 am 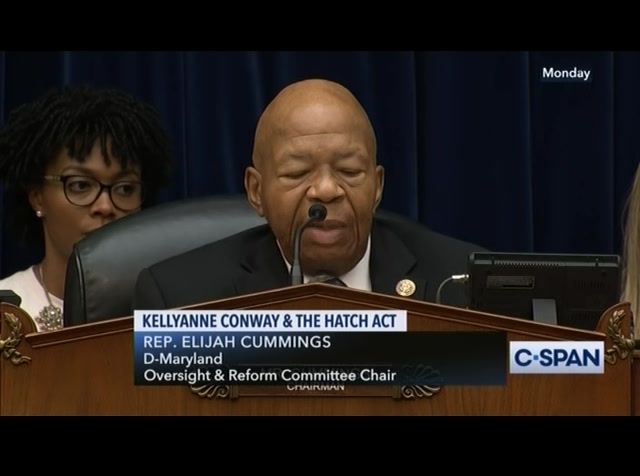 at all from president trump . recently, on june 13, 2019, the independent office of special counsel which is led by henry koerner who was appointed by president trump, issued a report recommending that the president fire ms. conway for "persistent, notorious, and deliberate violations of the hatch act. ". the hatch act would give federal -- prohibits federal employees from using official positions for partisan political purposes. the law ensures the federal government is administered in a nonpartisan way and that federal employees are protected from political coercion in the workplace. mr. koerner testified before the committee for more
5:20 am 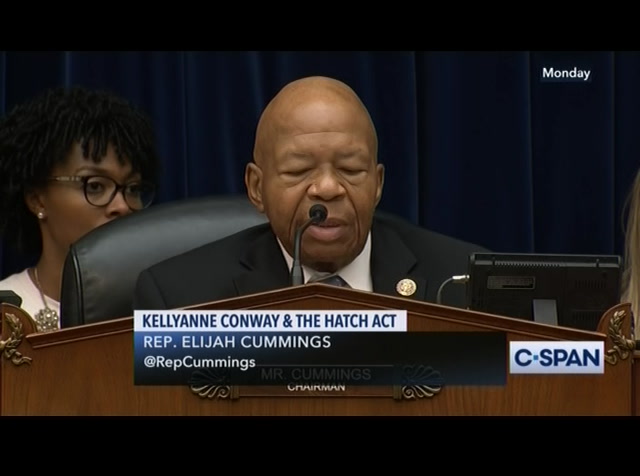 than three hours about ms. conway's violations of federal law. calling them "clear, repeated, annoying violations of -- and knowing violations of the hatch act.". he warned that since president trump is not taking any disciplinary action against ms. conway, he is a, "sending a false message to other federal employees that they need not abide by the hatch act, or that senior officials are above the law. ". today ms. conway is violating a duly authorized subpoena issued by the committee. she is required to be here today, to address her multiple violations of federal law. many of which occurred on national television. why is she not here? just 25 minutes ago,
5:21 am 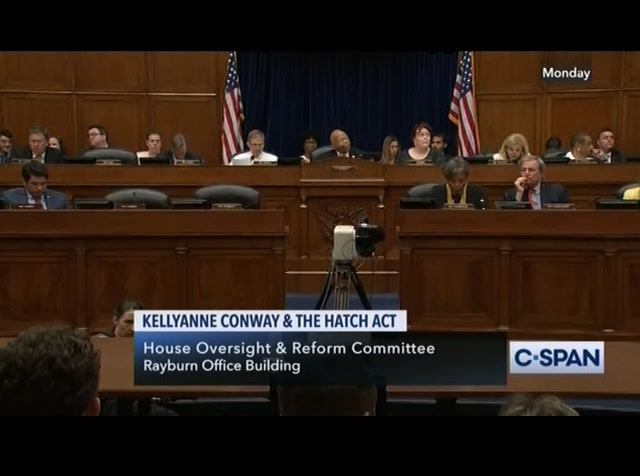 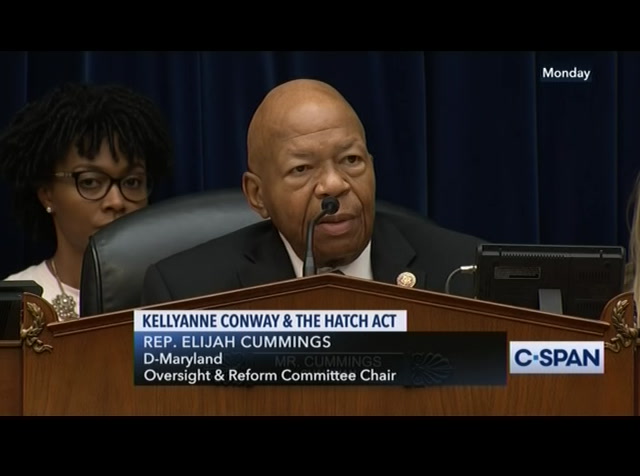 her to testify about advice she gave the president or about the white house's policy decisions. we are requiring her to testify before congress about her multiple violations of federal law. her waste of taxpayer funds, her actions that compromised public confidence, and integrity of the federal government. this illegal activity and the ongoing efforts to cover this up mustn't be allowed to stand. this is bigger than just the hatch act or any other law. this is about holding our government to the highest standard and not allowing individuals appointed by the president to be given special treatment when they flagrantly violate the law. i must add, we have over 2 million federal employees who obey the hatch act every hour of their working day.
5:23 am 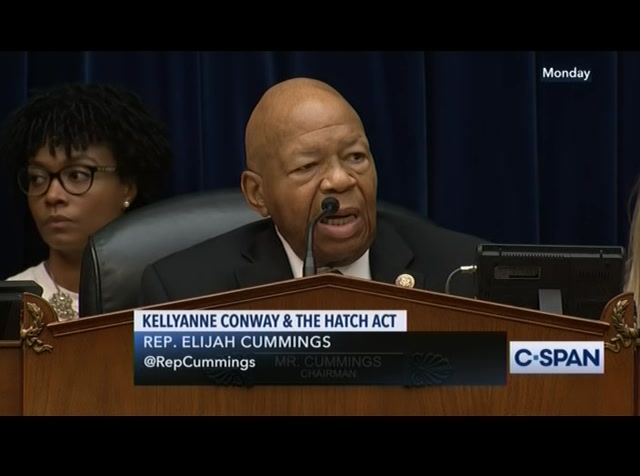 we hope miss conway will reconsider but if she does not we will hold a business meeting to hold her in contempt. i urge her to avoid the situation by agreeing to testify before the committee. i might note, this hearing was noticed for 4:00 today and it is now 4:18, it is now 4:18. our goal is to hear from miss conway. if she does not come forth, we have no choice but to hold her accountable. for that, i yield to the distinguished members. -- to the ranking member mr. jordan. >> mr. chairman, today's hearing is politics, pure politics. orchestrated by a left-wing advocacy organization to silence one of the president's top advisers, crew
5:24 am

was founded by the democrats impeachment manager. they targeted ms. conway not because they were looking to clean up the government but because she is effective, she is effective at holding the presss accountable, cutting through the noise to explain the presidents successes, and his vision for the country. crew knows attacking a high- profile member of the president's team will get them headlines, help them raise money, cause the administration to spend time and resources responding, crew filed a complaint with the office of the special counsel and bureaucrats, at osc. we are more than happy to run with it. the report produced was outrageous and unprecedented. during the obama administration never making a recommendation to remove employee white house employees from service despite numerous hatch act violations, when they did flag this unprecedented recommendation
5:25 am 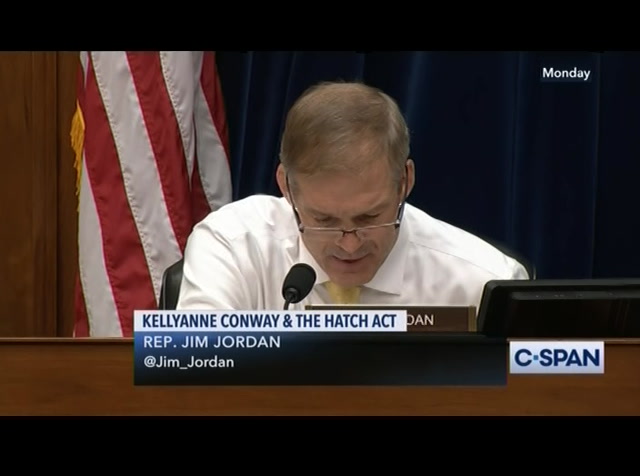 they only give the white house 16 hours, that is right, overnight to respond. the items they flagged are problematic, -- as problematic, are ridiculous. ms. conway said, vice president biden and senator bernie sanders, two old white career politicians, she said senator warren was lying about her ethnicity and appropriating someone else's heritage, she suggested congressman o'rourke does not think women running are good enough to be president, and she said senator bernie sanders had ideas that are terrible for america. i think a lot of americans would agree with her statements. whether you agree or disagree with the statements it's not changing the fact that they are miss conway's honest opinions and she has every right to share her opinions. democrats on the committee are more than happy to attack mis-conway and of course, the president. this is yet another example of the
5:26 am 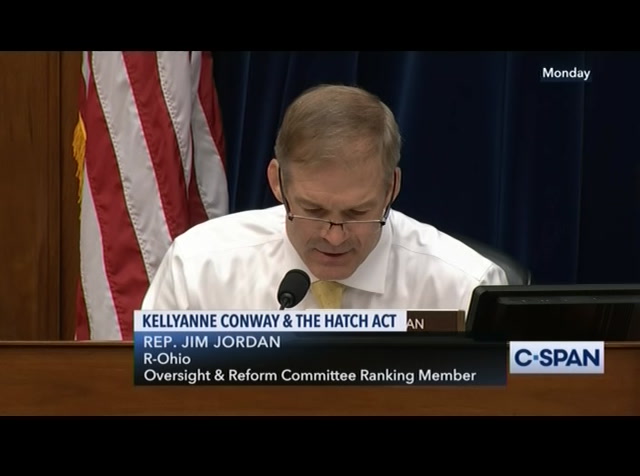 committee, as i said, being used for politics. special counsel henry koerner testified for several detailing every fact hours about his report. at this hearing it's only for the purpose of creating theater, political theater and advancing your partisan narrative about the administration. mr. chairman, you said the administration was engaged in a coverup from the top, on all the investigations, what you failed to say is that this administration has produced over 110,000 pages of documents to the committee and made available, all kinds of witnesses for transcribed interviews. with the rhetoric you've used about the administration, do you think really that ms. conway would think she would get a fair hearing here today? i don't think anyone is surprised she decided to spend the afternoon doing her job on behalf of american taxpayers rather than subjecting herself to a classic washington political theater committee hearing. and to what end? this does nothing to prove
5:27 am 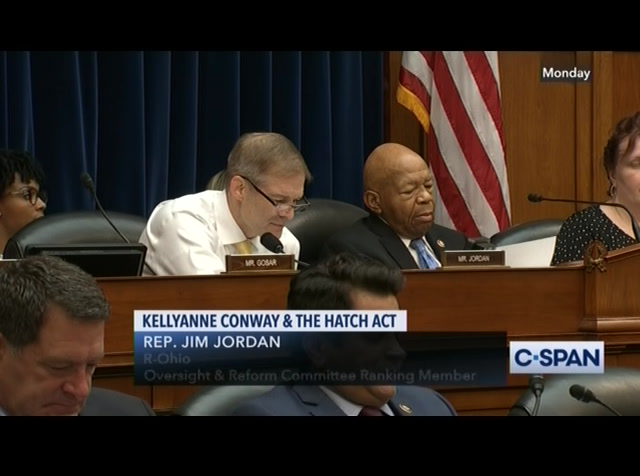 -- improve the lives of america. solve the crisis at the border or bring down drug races. for the past six months, the chairman and his democratic colleagues have decided to take shots at the president. let's be clear ms. conway's job is to provide the president and to keep the american people apprised of the administration's views in action. this is necessary politically and involves answering questions about the state of politics in america. to suggest that in carrying out her duty she ran afoul of the law and her first amendment we learned that the special counsel was upset that ms. conway did not stop everything she was doing and rearrange the way she does her job and be subject to a bureaucratic gag order pursuant to his office is -- office's overly broad interpretation of the hatch act. if we allow the hatchet to be interpreted this way it would
5:28 am 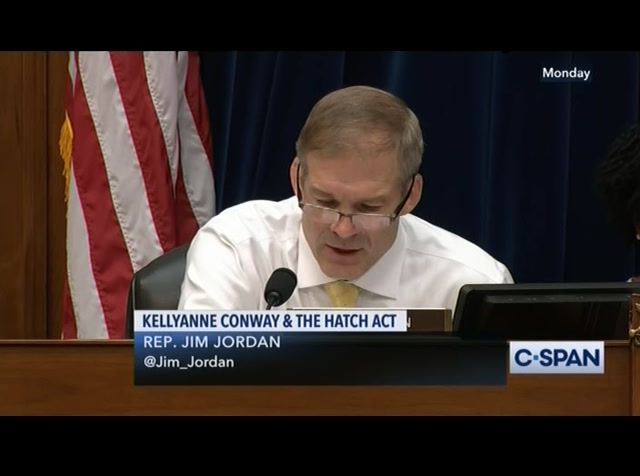 have a chilling effect on executive branch employees that would silence both republicans and democrats for decades to come. i know my colleagues and i would be amenable to a discussion about legislation that would clarify the bounds of the hatch act, that was brought up in our hearing when we had mr. koerner here but we are not amenable to the use of attempt to silence a senior presidential advisor like we are witnessing this afternoon. i yield back. >> i'm disappointed in ms. conway that she chose to defy the committee's duly authorized subpoena for her appearance and i want to thank my colleagues for coming here today, i hope that the white house will reconsider its position and cooperate with the committee, this hearing is adjourned.
5:29 am 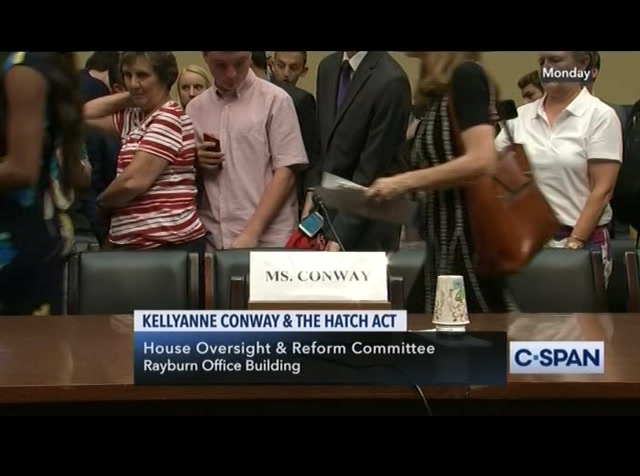 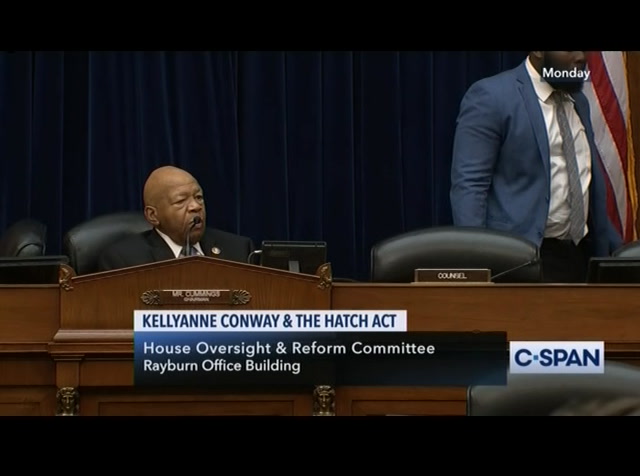 >> robert mueller testified to congress on wednesday about possible obstruction of justice and abuse of power by the president and russian interference in the 2015 is eventual election. our live coverage starts on c-span three.
5:31 am 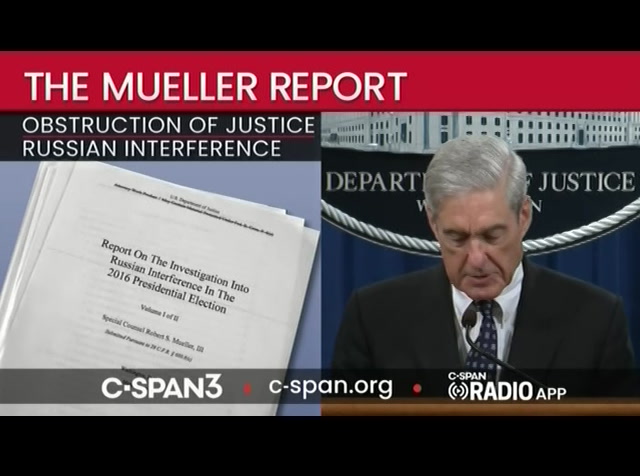 listen wherever you are with the free c-span radio app. listen to the complete mullah report on c-span.org on your laptop or mobile device. check the search box at the top of the page. -- audio up next a look at conditions at immigration detention .acilities the inspector general for special reviews and evaluations testified on a report of overcrowding and unsanitary this housearea judiciary subcommittee hearing is about an hour and a half. the hearing. >> the subcommittee on immigration and citizenship w
left
right
Borrow Program
tv

White House Counselor Kellyanne Conway defied a congressional subpoena and failed to testify at a House Oversight and Reform Committee hearing on allegations she violated the Hatch Act, a law limiting federal employees' political activity. Committee Chairman Elijah Cummings (D-MD) said if Ms. Conway did not reconsider he would hold a business meeting on July 25, 2019 to hold her in contempt of Congress.