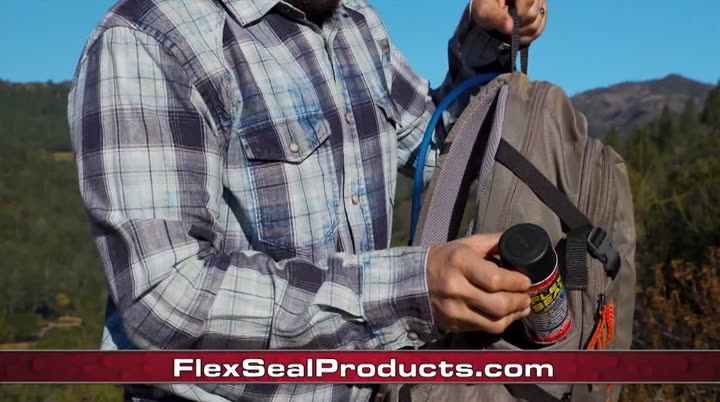 do you have a life insurance policy you no longer need? now you can sell your policy - even a term policy - for an immediate cash payment. we thought we had planned carefully for our retirement. but we quickly realized we needed a way to supplement our income. if you have $100,000 or more of life insurance, you may qualify to sell your policy. don't cancel or let your policy lapse without
1:42 am 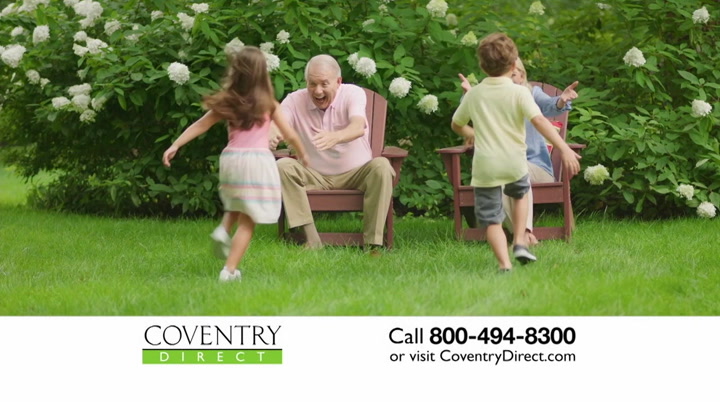 finding out what it's worth. visit coventrydirect.com to find out if your policy qualifies. or call the number on your screen. coventry direct, redefining insurance. recent drenching rain in vietnam brought hundreds of snails out from their hiding places. a hanoi woman says they were swarming and slithering all over her yard. she says she tried driving them away, but they just kept coming back. that's until the sun came out, when they virtually disappeared. >> where did they go? all right. girls all across the country, they're now entering puberty as young as 6 years old, and doctors don't know why. researchers tell "the new york
1:43 am 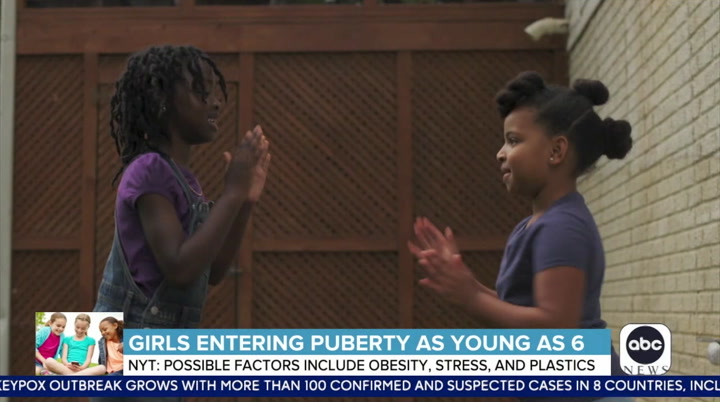 times" that earlier periods may be linked to several factors, including obesity, chemicals in certain plastics, and stress. in some cases, trauma from sexual abuse. they say early puberty can increase the risk of depression, anxiety, and substance abuse. there's growing concern about the virus known as monkeypox. doctors believe there are cases of it right now in the u.s. as well as else where in north america and in europe. and even though it's a rare illness, the government is said to be spending a lot muchof monn it. the number of confirmed or suspected cases of monkeypox worldwide is now 106. doctors in at least eight countries, including the u.s., are now treating patients potentially infected with the rare illness. health officials in new york city are now looking into a possible case one day after a massachusetts man became the country's first confirmed case this year. doctors say some recent cases include patients who had no travel history to a country where the virus is endemic, suggesting community spread.
1:44 am 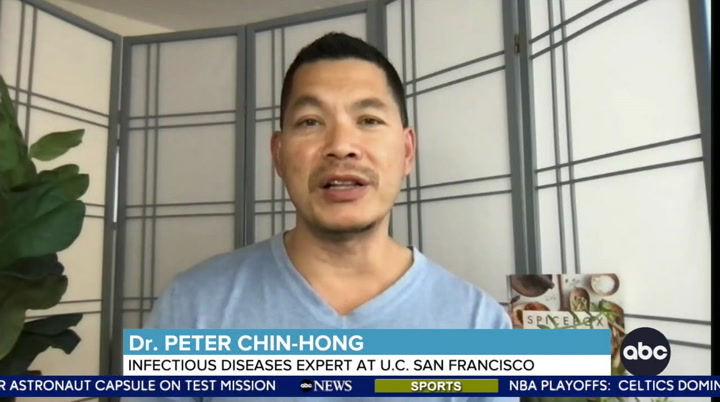 >> most signs have been outbreaks in west africa, like nigeria, for example, and sporadic cases in travelers in the united states. >> the u.s. government has reportedly placed a large order with the maker of a vaccine for monkeypox, purchasing enough for 13 million people at a cost of $119 million. >> there's an adapted vaccine for monkeypox. but the interesting thing is if you've been vaccinated with smallpox, you get protection against monkeypox because it's really closely related. >> initial symptoms for monkeypox are fever and chills, a rash, and pus-filled lesions show up later. it typically spreads to people from infected animals like rodents, but it can spread through humans by sharing of any bodily fluid. most of the cases under investigation right now are men who have had sex with men. >> i don't think it's really going to run rampant as opposed to smallpox, which is highly, highly transmissible. even the worst monkeypox so far, you know, one average infected
1:45 am 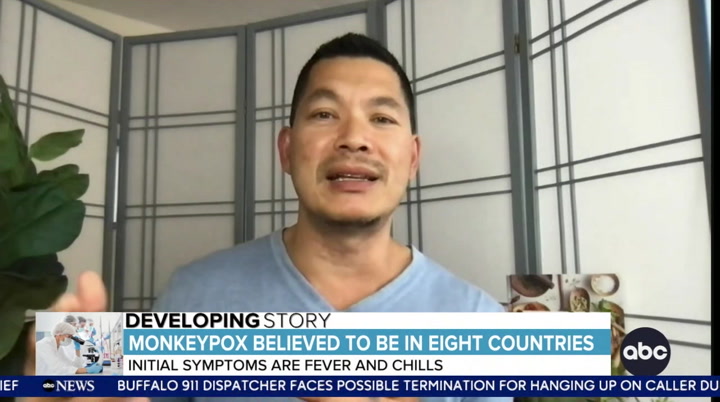 person only infects an additional either zero to one other person. >> doctors say the death rate for monkeypox is less than 1% in areas with what's considered high-quality health care. coming up, from hobby to hustle, we're meeting a young jazz musician who followed his heart all the way to a broadway credit and his first album soon to be released. and later in "the mix," another young musical prodigy who stunned hockey fans in miami. wow. you're watching "world news
1:46 am 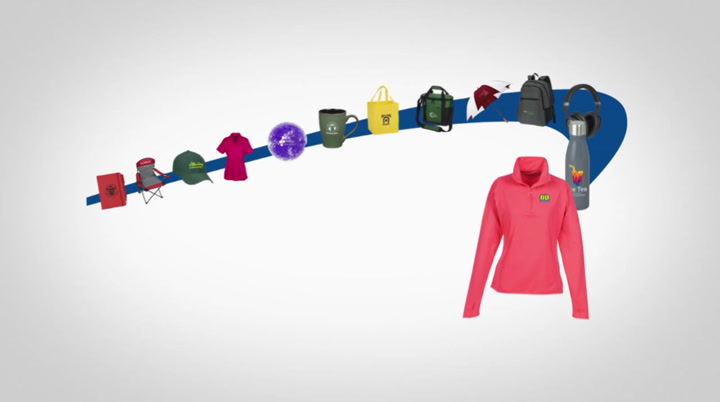 scene 103, take one. here we go. my name is wesley, and i'm with my knucklehead brother. my friend nafi. my boyfriend doug. i thought we'd be on the same page about this and we're not. how do i know the way i'm going to respond to it? there's not that long term research out there yet. i don't want to be on the front line. but you're human. you're going to make a mistake. i'm just saying everyone has a right to make their own decision. but why would you want to take that risk? can you imagine being the person that goes to somebody's house and gives them the virus that kills them? what if you end up in a hospital? yeah. that's what i'm scared of. if you were to die, man... that would literally kill me, man. if it makes you feel that way bro...
1:47 am 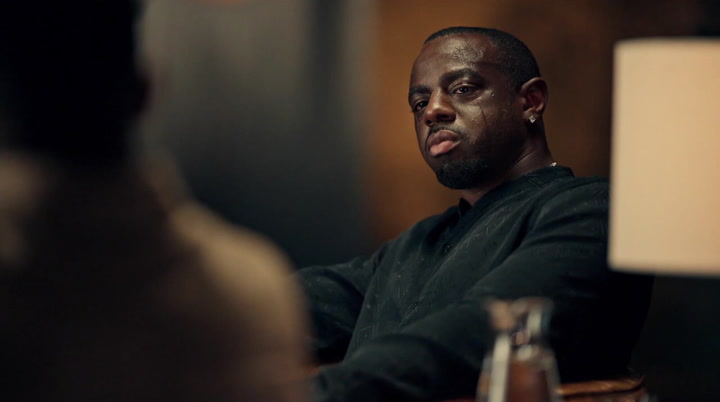 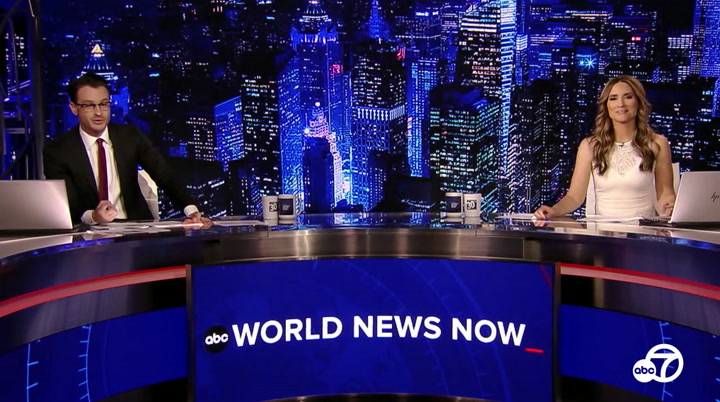 a modern day jazz man is sharing not only his music but also his story of perseverance and inspiration. >> our own will ganss is bringing us his third installment of from hobby to hustle, ending the week on a high note. >> on a high note indeed. when you think of jazz music, you might think of the hold music when you're waiting for the airline to pick up, or you might think it's something that was cool maybe a century ago. but brian carter would beg to differ. this is brian carter. ♪ say it don't matter ♪ >> a musician at the top of his game, described by "the new york times" as a juilliard-trained jazz prodigy. ♪ hey let the good times roll ♪ >> tho he might tell you otherwise. >> the thing about being a musician is you're always a student, and you're always trying to get better at the craft, you know? just like a basketball player or a football player. i'm just trying to get better. >> brian earning his first broadway credit, co-orchestrating the music for a strange loop, the most nominated
1:49 am 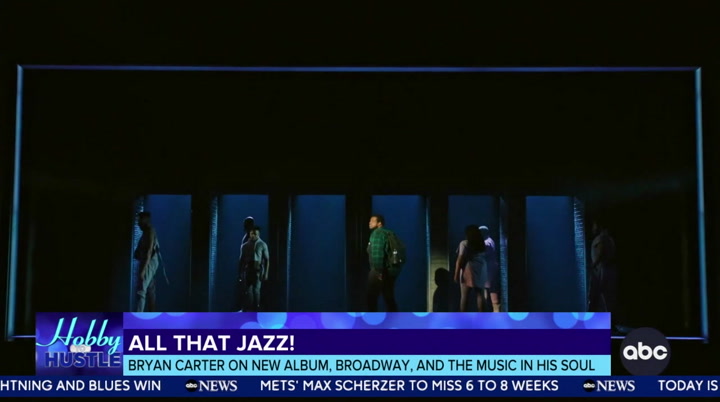 musical this season. >> i got really lucky. it just kind of fell into my lap. my good friend charlie rosen, and then he was like, hey, brian, can you go to d.c. and just fill in for me, you know, for a couple weeks on the show, like be my associate orchestrator. i was like, dude, yeah, absolutely. i saw the show, and i was like, this is the most amazing thing i've ever seen. i got to be a part of the broadway run as well, contributing additional orchestration. >> brian was born with music in his bones. his father also a musician. but music was an extracurricular for brian until it wasn't. >> around 17 years old, i had the opportunity to play at the grammy awards. i think that kind of confirmed for me that this is what i need to do with my life. >> sitting onstage at the grammys instead of sitting in algebra 2 class, that's what did it for you? >> it was like, which one is better? i think it's -- i'll take
1:50 am 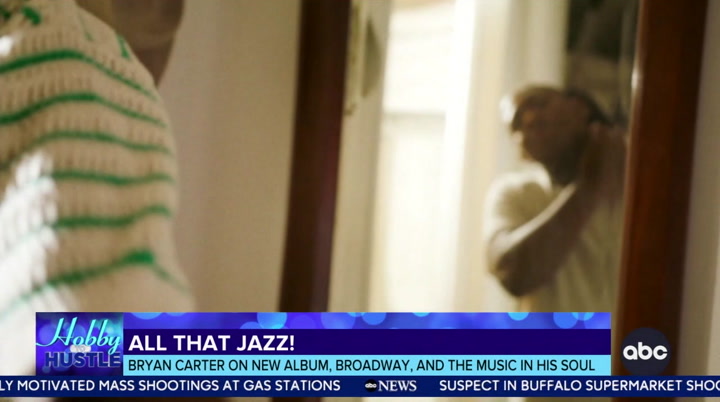 grammys, yeah. >> now, all these years later, bryan has got the most recent album of the year grammy winner collaborating on bryan's own album, which drops next month. >> jon batiste is one of the writers on the album. just seeing his suck asset at the grammys this year is really inspiring. >> you and i, the song jon batiste co-wrote with bryan was the first single off the upcoming album, i believe. >> it's been a labor of love, and it's been in the works for 4 1/2 years now. y the takeaway should be there's no right way to figure out who you are. >> when the album drops on june 3rd, bryan hopes he can remind people of what jazz should be. >> i love introducing young people to this music. they're like, that's jazz? i thought jazz was the elevator stuff. i'm like, it can be, but it's this also, you know? there's nothing wrong with twerking to jazz. that's what i got to say. >> you just wrote the headline of this piece. that's it.
1:51 am 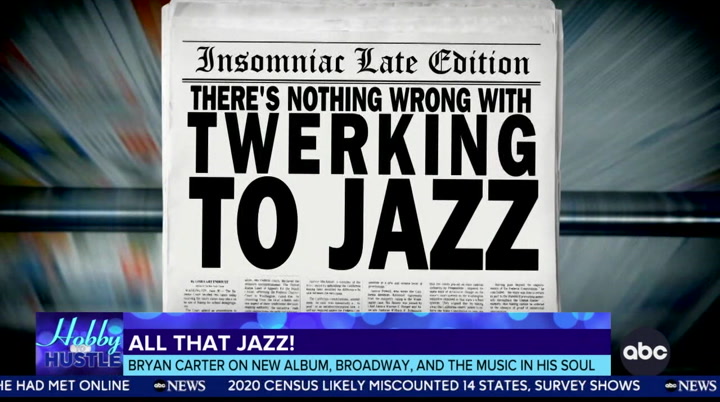 that's it right there. extra, extra, read all about it. there's nothing wrong with twerking to jazz. okay. so i asked bryan if he's able to take a break once "i believe" is out on june 3rd. not quite, you guys. he's plads of playing jazz it pride at lincoln center on june 27th, and he's also co-orchestrating the brand-new musical some like it hot, which opens on broadway this fall. that's based on the marilyn monroe movie, you know, from way back in the day. so he's a busy man. >> yeah, things are just getting started for him. i don't think this is a hobby anymore or a hustle. this is -- >> no. >> he's a superstar. jon batiste wrote on his album? >> isn't that so cool? for jon to have just one album of the year at the grammys and now they're working together, jazz is officially. i know it was never not cool, but it's cooler than ever. >> there you go. >> you got to listen to the legends, john coltrane, maynard
1:52 am 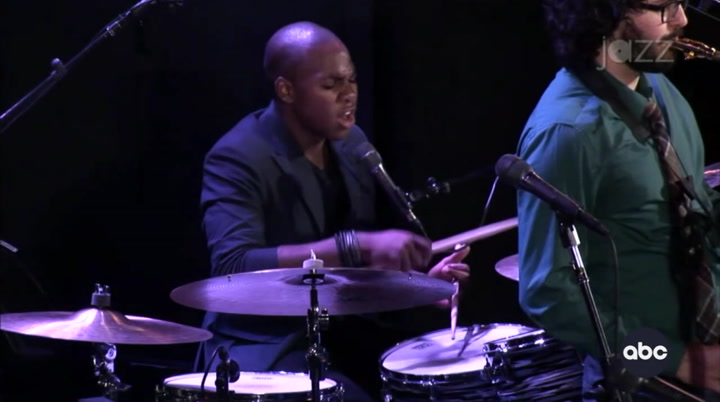 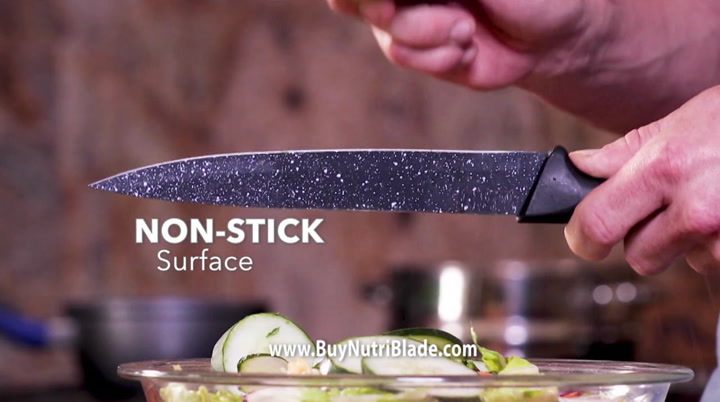 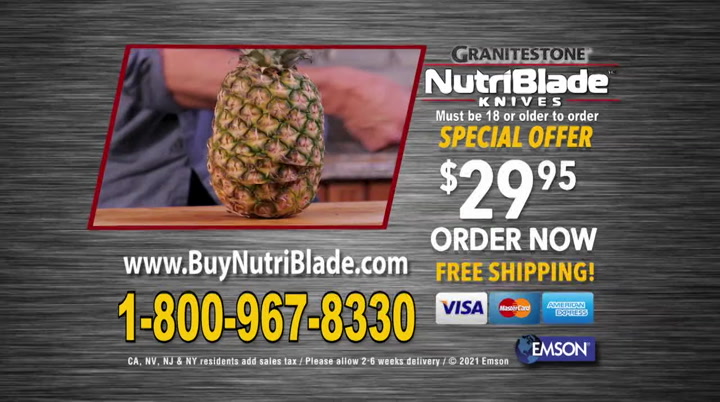 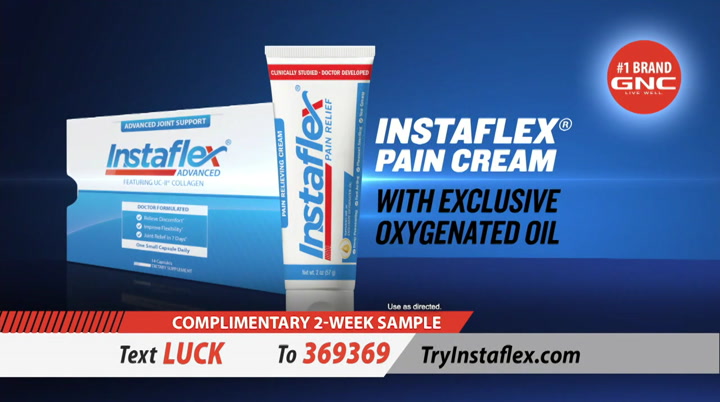 ♪ all right. time now for "the mix," and we're starting in my hometown with a pint-sized prodigy. >> she showed off her stuff on the ice in south florida ahead of the panthers-lightning game. >> her name is perniska. she's only 7 years old and she belted out the national anthem like nobody's business. ♪ >> hitting all the high notes flawlessly, might i add. she says she hopes to one day be a broadway performer. i would say she's well on her
1:56 am 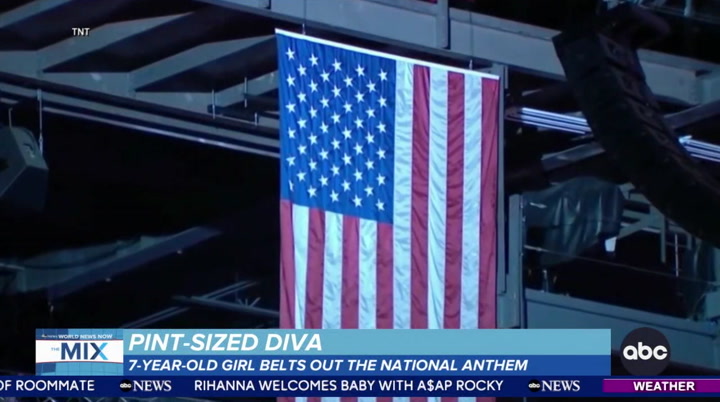 way. >> to have that confidence at 7, amazing. a big congrats to her. next, to some pienlt-sized love. >> 4-year-old nyla gonzalez appears to have forged an interspecies bonding with this sea lion at the smithsonian national zoo. >> basically the puppies of the ocean. she held a coin up to the glass. the sea lion danced and tried to chase it as little nyla ran back and forth. the lion appeared to be upset when nyla started to leave, showing off by blowing some bubbles. aw. all right. we are leaving you now with our friday polka. ♪ >> recorded in their hometown in what varria, germany, meet the international favorite, the high much dam ash. ♪ that's the world news polka ♪ ♪ if you're an insomniac and a good night's sleep you lack ♪
1:57 am 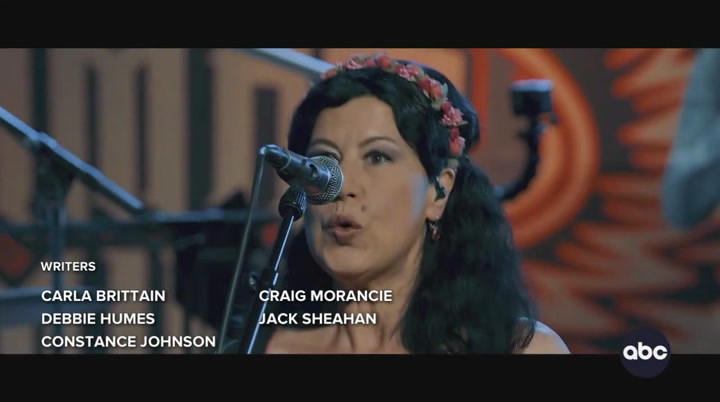 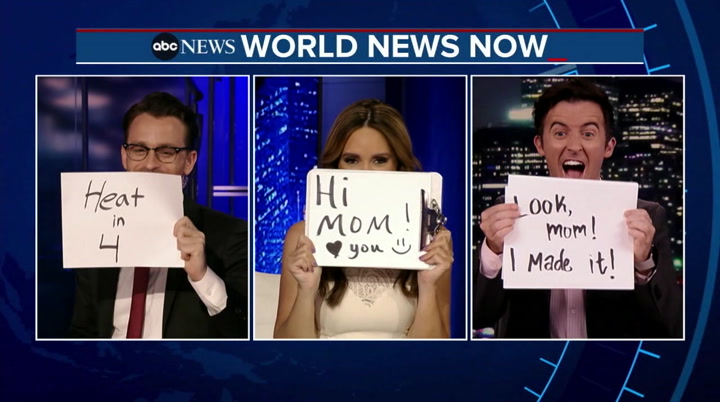 meet apartment 2a, 2b and 2c. 2a's monitoring his money with a simple text. like what you see abe? yes! 2b's covered with zero overdraft fees when he overdraws his account by fifty bucks or less. and 2c, well, she's not going to let a lost card get her stressed. am i right? that's right. that's because these neighbors all have chase. alerts that help check. tools thro y i chase.
1:59 am 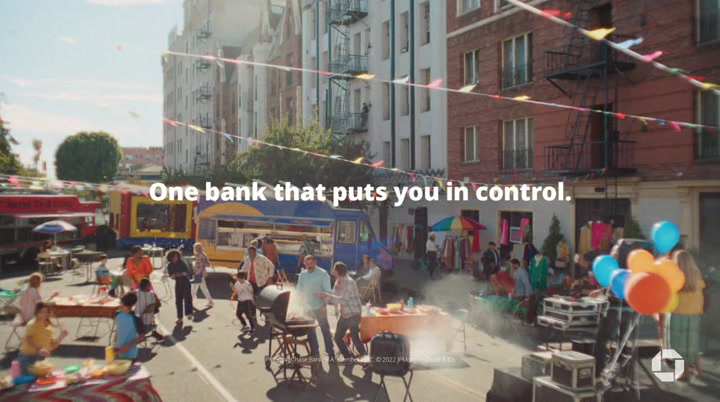