LEGO Bits N' Bricks Season 1 Episode 2: Fluid Play.
Mirrored from 25 years of LEGO Games on the LEGO website.
In this episode of Bits N’ Bricks, documentarian Ethan Vincent and journalist Brian Crecente explore the birth and evolution of the LEGO Group’s efforts to cohesively combine physical and digital play. The two trace the company’s efforts from the never-released smart toy DUPLO® Circus based on the LEGO® KidPad technology platform, through to the work in one reality creations like Life of George and Fusion, to finally the release of fluid play concepts Hidden Side and LEGO Super Mario.
Featuring Sam Coates, Cephas Howard, Paal Smith-Meyer, John Sokolowski, and Michael Vanting. 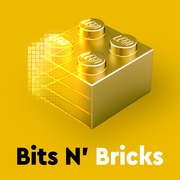