Briefing:
Our scanners aboard the L.M.S. Explorer have identified a large network of nine interconnected lava caverns. They form a huge calm lava sea that contains vast amounts of Energy Crystals just lying around to be collected by our Rock Raiders.

We identified one of these caverns to be suited best for our Rock Raider HQ. Built it up and open up the remaining eight lava caverns in order to collect at least 40 of the valuable Energy Crystals.

Keep in mind that it will be difficult at times to traverse the lava and open up new caverns. Our Tunnel Transports are out for another mission so they will not be available at first. Use each of the other Rock Raider vehicle abilities to your advantage like the jump ability of the Hover Scout and the Granite Grinder. The Tunnel Scout can be upgraded to drill through anything but Hard Rock and Lasers can shoot over long distances. Good luck!

Author's note:
I wanted to create a map where you have to use different vehicles in order to be successful. I hope I achieved it and it is fun to play. Although you get the Tunnel Transport in the end, you can solve everything without it. Can you do it?

This level was built in Manic Miners version 0.3.5. 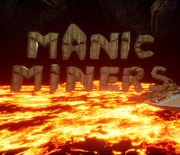