With the Rockband "The Iceni" and NN
Five men in white clothing floating against a black background. And in the split screen above the torso of a man. Below the lower body of the dancing girl from the "dance loop".

More complicated is "Up / Down", that recorded alternately in slow motion and normal recording five male dancers and a female dancer. The image is divided horizontal in the middle so that the body of a man can be combined with the one of the girl. Then the camera is rotatet around the axis and in a different order again combined shots follow.
(LEXIKON DES NEUEN EUROPÄISCHEN FILMS)

The Lutz Mommartz Film Archive is a collection of the film works of German film-maker Lutz Mommartz, considered to be one of the pioneers in the film genre known as the "other cinema". Mommartz was born in Erkelenz in 1934 and spent most of his life in Düsseldorf. He began making movies in 1967 and eventually became Professor of Film at the Kunstakademie Münster. He still lives and works in Germany, dividing his time between Düsseldorf and Berlin.

Reviewer: nrajr - favorite - June 11, 2014
Subject: Nothing special
Being from the era, I suspect this is one of the pieces of "art" created while the artist(s) was stoned or tripping on acid, and meant to be appreciated under the same influence. I now find it hard to believe we liked this kind of stuff. Rather nonsensical really.

Reviewer: musetian - - June 11, 2014
Subject: MPEG2 file is not de-interlaced
Just a heads up: to get rid of the streaks on the MPEG2 file, de-interlace the video.

For instance the VLC player can do it while you watch the film, or you can use the freeware program "MPEG streamclip" to de-interlace it and save it to a new file. 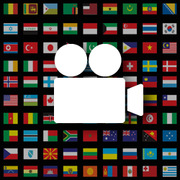