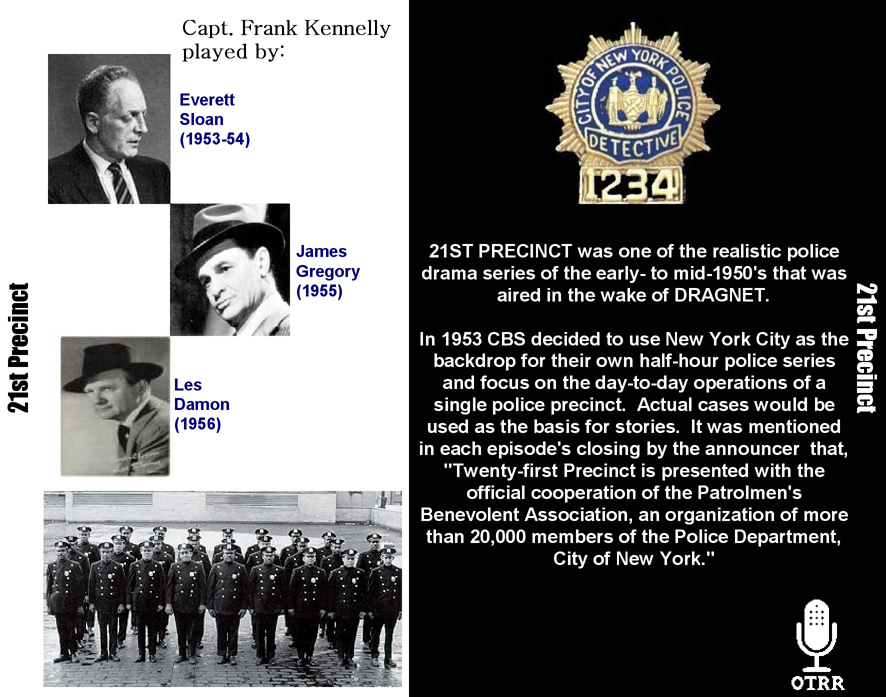 21st Precinct was a very dramatic police drama. CBS decided to use New York City as the backdrop for this series and to focus on the happenings in an actual police precinct. The premise was to put the listener into the drama from the opening phone call until the final report was written.

The 21st was described as

"just lines on a map of the city of New York. Most of the 173,000 people wedged into the nine-tenths of a square mile between Fifth Avenue and the East River wouldn't know if you asked them that they lived or worked in the 21st."

The detail was made up of 160 patrolmen, eleven sergeants, and four lieutenants, under the command of one captain - Frank Kennelly. It was mentioned in each episode's closing that, "21st Precinct is presented with the official cooperation of the Patrolmen's Benevolent Association an organization of more than 20,000 members of the Police Department, City of New York."

The Captain was the primary character and also acted as the narrator. Three actors played the Captain's role: Everett Sloane as Kennelly for the first 109 episodes and returned briefly in episode 135; James Gregory as Vincent Cronin for episode 109-144; and Les Damon as Thomas Keough starting in episode 145 through the remainder of the series. In supporting roles were Ken Lynch as Lt. Matt King and Harold Stone as Sgt. Waters. Santos Ortega appeared frequently as Lt. Patrick "Red" Gorman.

Ninety-two episodes are in circulation for this series. It is generally believed that they were all recorded off the air by one collector as they were broadcast; however, many episodes appear to have been circulating independently of one another in the early 1970s. Several dealer catalogs from that period list them for sale, stating 'dubbed from the original transcription disks'.

Everett Sloan had a distinguished show show biz history. He was a member of Orson Welles Mercury Theater. I recall him him in a movie as the father of Marjorie Morningstar.

Just the right mix of real sounds and story telling.
Reviewer: Radiocaster - favoritefavoritefavoritefavoritefavorite - May 19, 2008
Subject: 21st Precinct
I thought I be the first to write review on what I consider to be a very underated show surely it has been overshadowed by it's rival Dragnet. If you have seen Hill Street Blues surely you will understand where the writers took the idea, From this show!!! Having listen'd to many classic radio shows now this is up there with the best crime dramas, scripts and emotional dilogue do not date this show Everret Sloane is most convincing as Captain Frank Kennelly.I strongly ask those OTR buffs to check this out! Thankyou to all those working on Internet Archive for a great site!!