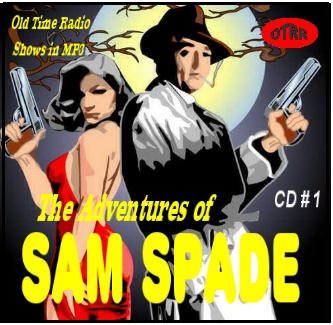 THE ADVENTURES OF SAM SPADE

The Adventures of Sam Spade was first heard on ABC July 12, 1946, as a Friday-night summer series. The show clicked at once, and went into a regular fall lineup on CBS September 29, 1946. From then until 1949, Sam Spade was a Sunday-night thriller for Wildroot Cream Oil, starring Howard Duff in the title role. With Duff's departure, NBC took the series, leaving it on Sunday for Wildroot and starring Stephen Dunne as Spade. This version lasted until 1951, the last year running as a Friday sustainer.

Spade's appearance on the air marked an almost literal transition from Dashiell Hammett's 1930 crime classic, The Maltese Falcon, where he first appeared. Spade was a San Francisco detective, one of the most distinctive of the hardboiled school. His jump to radio was wrought by William Spier, who had already carved out a reputation as a master of mystery in his direction of another highly rated CBS thriller, Suspense.

Spier was editor, producer, director. A lifelong radio man, he had broken in during the primitive days of 1929 and earned his stripes serving on such pioneering shows as The March of Time. Spier assembled the writing team of Bob Tallman and Ann Lorraine and began putting Spade together. He was impressed by the deep, cynical, tough qualities in Howard Duff's voice.

Duff had long experience as an actor, a career that traced back to his high school days in Seattle. He had originally wanted to be a cartoonist, but the sound of applause in a senior-year play at Roosevelt High changed all that. Suddenly stagestruck, Duff began hitting the boards. He worked in local theatre groups and craked radio as an announcer on a local station. When the war came, Duff went with Armed Forces Radio as a correspondent, a job he held for more than four years. He emerged in Hollywood in 1945, a seasoned but unsung microphone veteran. With his perfect voice and polished delivery, it wasn't long before Duff was playing supporting parts in top dramas of the air.

Sam Spade shot him to national fame. The character, as Spier saw it, would Have many easily identifiable traits. The first thing Spade usually wanted to know was, "How much money you got on you?" "Two hundred? Okay, I'll take that and you can pay me the rest later." But Spade wasn't a spendthrift -- he never threw silver-dollar tips a la Johnny Dollar, even if he could have put it on his expense account. Spade favorite way to travel was by streetcar; it took him almost anywhere for a dime. He disliked cabs and liked cheap booze. You didn't need more than an occasional, subtle reminder: those glasses clinking every week as Sam opened his desk drawer and began dictation were enough. We knew Sam and Effie weren't toasting each other with Sal Hepatica. Sam was a man who worked out of his desk, and the thing closest at hand in that top drawer just might be a half-empty bottle of Old Granddad.

His clients got bumped off with startling regularity. Then Sam sent his report (and presumably his bill) to the widows. He dictated his cases to his faithful secretary, Effie Perrine, a babbling, man-hungry female who might have been the adult Corliss Archer. Each case came out as a report, dated, signed, and delivered. Spade license number - 137596 - was always included in the report. The cases unfolded in chronological order, the scenes shifting between Sam and Effie and the dramatization of Sam's dictation. Effie, who always seemed on the verge of tears whenever Sam became involved (as he did weekly) with a curvy client, was beautifully played by Lurene Tuttle, Jerry Hausner played Sam's lawyer, Sid Weiss. Lud Gluskin directed the music and Dick Joy announced. Soon after the series began, Ann Lorraine dropped her writing duties, and Gil Doud became Bob Tallman's writing partner.

The show ran in its original format through the episode of September 17, 1950. Then Howard Duff quit for a fling at movies, and Sam Spade languished for two months. On November 17, 1950, it returned on NBC. Duff's absence was handled in usual network form: by importing a new voice. NBC ran the show as though nothing had happened, using Steve Dunne as a boyish-sounding Spade. Spier and Miss Tuttle followed the series over, and for a time so did Wildroot. Wildroot and the listeners all got wise around the same time. Dunne was a good radio man, but he sounded like Sam in knee pants.

Duff once said that Hammett had done such a great job in The Maltese Falcon that any actor could have played Sam and become a radio hero. He saw that theory proved wrong. In spades.

Information for this audio clip came from John Dunning's "Tune In Yesterday The Ultimate Encyclopedia of Old Time Radio", and your Audio Series Descriptions Moderator (Roger Hohenbrink). From the Old Time Radio Researchers Group. See "Notes" Section below for more information on the OTRR.

Reviewer: smbhax - favoritefavoritefavoritefavorite - April 18, 2020
Subject: Several different Spades
A mostly fun, and varied series. It starts off playing things semi-serious, but Duff and Tuttle's playful banter soon gets nuttier and nuttier, and the series, at its peak, features constant wordplay, self-parody, and self-awareness. Really fun stuff. Maybe halfway through Duff's run, however, the smartness goes out of the writing, the wordplay becomes mediocre, and listening a bit of a slog.

Dunne's voice is nothing like Duff's, and it's a tough adjustment to make. Under Dunne, the series moves away from light humor to a bit more of a hard-boiled thing; I wasn't digging it at first but it grew on me, and all in all is competently pulled off.

The Spade-Effie relationship hasn't aged well: she's his secretary, but it gradually emerges that they're also vaguely romantically involved--he orders her around, she sometimes harps at him about other women, but inevitably melts in his arms...and then goes home. Did this make sense in the 40s?
Reviewer: harron68 - favoritefavoritefavoritefavorite - March 4, 2020
Subject: SAM I AM?
These shows shouldn't be confused with the Bogart film version. Both Duff and Dunne play the role more with style than seriousness, a la Dick Powell's RICHARD DIAMOND, the breezy plots have danger in every dark alley, but never fear, all will come out fine.
The demeaning of Steven Dunne's voice has truth, but some guys do have higher voices, and the plots of the later shows keep the quality of the series well. I enjoy the tales' twists. The Effie bits that close episodes I once enjoyed in the 1970s seem overdone, and make me wince in embarrassment for the way "good" women were too often portrayed back then.

Uploaded by OTRRArchive on December 30, 2018