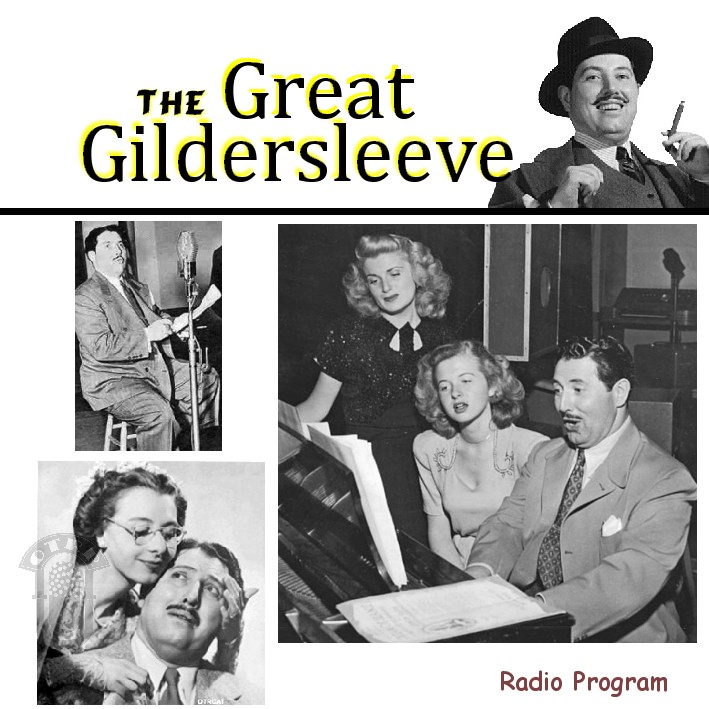 The Great Gildersleeve is a radio situation comedy broadcast from August 31, 1941, to March 21, 1957. Initially written by Leonard Lewis Levinson, it was one of broadcast history's earliest spin-off programs. The series was built around the character Throckmorton P. Gildersleeve, a regular element of the radio situation comedy Fibber McGee and Molly. The character was introduced in the October 3, 1939 episode (number 216) of that series. The Great Gildersleeve enjoyed its greatest popularity in the 1940s. Actor Harold Peary played the character during its transition from the parent show into the spinoff and later in four feature films released at the height of the show's popularity.

"Gildy" grew so popular that Kraft Foods—promoting its Parkay margarine—sponsored a new series featuring Peary's somewhat mellowed and always befuddled Gildersleeve as the head of his own family.

The Great Gildersleeve premiered on NBC on August 31, 1941. It moves the title character from the McGees' Wistful Vista to Summerfield, where Gildersleeve oversees his late brother-in-law's estate and rears his orphaned niece and nephew, Marjorie and Leroy Forrester. The household also includes a cook named Birdie. While Gildersleeve had occasionally mentioned his (unseen) wife in some Fibber episodes, in his own series he is a confirmed bachelor. At the outset of the series, Gildersleeve administers a girdle manufacturing company ("If you want a better corset, of course, it's a Gildersleeve"); later and during the remainder of the show he serves as Summerfield's water commissioner.

A key figure in the Gildersleeve home was cook and housekeeper Birdie Lee Coggins (Lillian Randolph). In the first season, under writer Levinson, Birdie was often portrayed as less than intelligent, but she slowly developed as the real brains and caretaker of the household under Whedon and other writers.

Marjorie (originally played by Lurene Tuttle, later by Louise Erickson and Mary Lee Robb) matured to a young woman through the 1940s. During the ninth season (September 1949-June 1950) she met and married Walter "Bronco" Thompson (Richard Crenna), star football player at the local college. Look devoted five pages in its May 23, 1950, issue to the wedding. After living in the same household for a few years, the newlyweds moved next door. Leroy (Walter Tetley), who remained age 10–11 during most of the 1940s, began to grow up in the spring of 1949, establishing relationships with the girls in the Bullard home across the street. He developed interests in driving, playing the drums and dreaming of a musical career.

Outside the home, Gildersleeve's closest association was with the executor of his brother-in-law's estate, Judge Horace Hooker (Earle Ross), with whom he had many battles during the first few broadcast seasons. After a change in scriptwriters in January 1943, the confrontations slowly subsided and the two men became friends. During the second season, pharmacist Richard Q. Peavey (Richard LeGrand) and barber Floyd Munson (Mel Blanc for the first year, Arthur Q. Bryan from December 1942 onward) joined Gildersleeve's circle of acquaintances.

In the fourth season, these three friends, along with Police Chief Donald Gates (Ken Christy), formed the nucleus of the Jolly Boys Club, whose activities revolve around practicing barbershop quartet songs between sips of Coca-Cola. Several women passed through Gildersleeve's life during the series, including three he almost married before settling into a pattern of casual dating.

In 1950, Harold Peary was convinced to move The Great Gildersleeve to CBS, but sponsor Kraft refused to sanction the move. Peary, now contracted to CBS, was legally unable to appear on NBC as a star performer, but Gildersleeve was still an NBC series. This prompted the hiring of Willard Waterman as Peary's replacement. Peary, meanwhile, began a new series on CBS which attempted to reproduce the Gildersleeve show with the names changed. The Harold Peary Show, lasting one season, included a fictitious radio show within the show. This was Honest Harold, hosted by Peary's new character.

Starting in mid-1952, some of the program's long-time characters (Judge Hooker, Floyd Munson, Marjorie and her husband, Bronco) were missing for months at a time. In their place were a few new ones (Mr. Cooley the Egg Man, and Mrs. Potter the hypochondriac) who would last only a month or so. By 1953, Gildersleeve's love life took center stage over his family and friends. His many love interests were constantly shifting, and women came and went with great frequency.

In 1954 the show's format changed drastically. After missing the fall schedule, it finally appeared in November as 15-minute episodes that aired five times a week. Only Gildersleeve, Leroy and Birdie remained on a continuing basis. All other characters were seldom heard, and gone were Marjorie and her family as well as the studio audience, live orchestra and original scripts.

The material for this series synopsis was originally published at www.wikipedia.com

Reviewer: bnation - favoritefavorite - September 27, 2021
Subject: Not how I remember it
I was a fan of the show as a child and youth. However, rediscovering the show all these years later is a very disappointing experience. It’s an awful show and Gildersleeve is an especially awful character. Peavy's "Oh, I wouldn’t say that" is the only funny bit in the whole enterprise.
Reviewer: OTRRArchive - - January 5, 2020
Subject: Files Updated!

Reviewer: harron68 - favoritefavoritefavoritefavorite - January 11, 2019
Subject: The First Spinoff
The Gildy character began on the Fibber McGee show, but was so popular, he got his own sit-com. More familial, less jokey than its origin, it still has a warmth common to the era. I went through getting to like it in the '60s old time radio repeats shows, then loved it. Today, I rarely stop by here, but the script and acting qualities remain. I give it 4 stars based on those factors and its longevity. By the way, Peary was a fine man too, visiting servicemen in hospitals for years. Plus, when he lost the show and character and had "Honest Harold" fail after one season, he was never bitter. May his memory live in all who stop by here!
Reviewer: perlster - - February 11, 2018
Subject: OTRR certified what? (again)
The_Great_Gildersleeve_51-03-21_398_Bronco_Tries_to_Run_the_House.mp3

However, I have one main objection to the show, and that is the character of The Great Gildersleeve, himself. He is portrayed as being a pompous, self-centered goldbricker (he avoids doing as much work as possible at his job); a "womanizer" who is apparently still a virgin in his forties (he never gets beyond fleeting kisses) who studiously tries to avoid any sort of full-time commitment (such as marriage); somewhat of a con artist; and a man of relatively little intellect who feels just the opposite about himself.

I've listened to the entire series over the years, and have found it relatively enjoyable, but have really never warmed to Throckmorton.