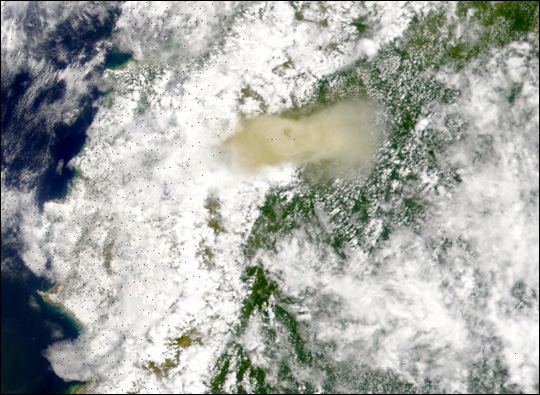 Ecuador's El Reventador volcano, situated roughly 60 miles northeast of Quito, erupted suddenly on November 3, 2002, sending a cloud of ash 10 miles into the sky. This true-color scene was acquired by the Sea-viewing Wide Field-of-view Sensor (SeaWiFS), flying aboard the OrbView-2 satellite, within hours after the eruption began. In this scene, the volcanic plume appears grey and can easily be distinguished from the whiter clouds. Much of the ash has settled onto Ecuador's capital city and the surrounding countryside, prompting Ecuador's president to declare a state of emergency for the 1.4 million inhabitants of the region.

Scientists were surprised by the eruption, which spewed ash and gases into the sky throughout the day of November 3. Hot ash, gases, and burning rocks also rained down the flanks of the volcano. By the morning of November 4, El Reventador's ongoing eruption had subsided somewhat. However, geologists urged residents of Quito to remain cautious because the volcano could erupt again.

Scientists and local officials are also concerned that the eruption could create a humanitarian crisis for the region, both in that the ash is polluting the local water supply as well as potentially poisoning livestock grazing on soot-covered vegetation in the region.