Notes: Comicon announced right before the show that no taping (audio or video) would be allowed. WTF... They played about a half hours worth of songs. Excellent show. Kevin Smith came out and introduced them, "There's only 9 cocks in the world that I'd suck. There used to be 10 but I topped Affleck off and crossed him of the list ... These dudes represent number 6 and number 5, Tenacious D!" And they took the stage. Kyle Gass told the crowd "Fuck the man, start videotaping this shit right now," and they went into 'Black Sheep Boy'.

It was excellent. Other highlights including someone breakdancing during Lee onstage, Jack Black demoing a drum beat with a hidden message in it ( "I'm gonna take a piss, I'm gonna take a shit") and playing a "Saxaboom."

Still an audience-based recording, but slightly better quality at least at times.. I did manage to score a seat only about 3 rows back on the right side of the stage.
Reviewer: Sluggo714 - favorite - December 9, 2005
Subject: Send this one to Gitmo
They can play it for the "detainees" between playings of "Panama".
I'm sure those Amnesty Int folks would be there quick with posters and rallys and flyers that read "Stop the cruel and unusual punishment!!" And I bet the "detainees" would be begging for the waterboard after hearing this stuff.....

No, seriously, no knock on Tenaciuos D. whatsoever, but this sounds like the mic was inside a not quite empty 40 oz Heffenreffer which sat on the floor of the nosebleed seats.....
Reviewer: Dick Dale - favoritefavoritefavoritefavorite - October 7, 2005
Subject: Stealth
I cant believe how tight concerts are now. Security guards dont have any problem groping the hell out of you, just to make sure that the concert stays in the venue. To hell with that! Thanks for getting this show for those of us so inclined to listen. Quality isnt the best, but not bad considering the situation. Quality deserves 3 stars, but the show deserves 4. Thanks again!!!!!!!
Reviewer: Tyler - favoritefavoritefavorite - September 29, 2005
Subject: Comic-con
"Other highlights including someone breakdancing during Lee onstage" .. that was most likely "Lee" .. aka JR Reed... (his real name). In past shows, he has come up on stage and breakdanced behind jack and kyle while they play his song.. A fun recording. quality is average. You can hear the taper rustling, nearby chatters distantly ...but still a solid taping job. Also fun is the inclusion of the extended intro announcements telling people not to record... a fun set with the standard 'new songs' from the movie being played.. fun songs, but nothing that made me crack up out of nowhere like the early D songs made me do when I first heard them... Solid show. 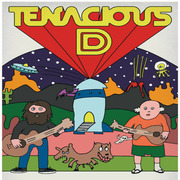