The Cabinet Of Dr. Caligari.
A good doctor for those who cannot stop complaining. Listen to the doctor go to sleep take your laxatives with your sleep meds just like the good Doctor Caligari tell s you to Clean up the mess in the morning and everything will be just peachy keen. Be sure to take those laxatives with those sleep meds, and remember that you are all alone , be sure that the neighbors do not smell the horrible odor coming from your one room apartment , just clean up after yourself and always listen to the good Doctor Caligari, who always has your best interests at heart. This film is safely in the PUBLIC DOMAIN

Rights
The original film has fallen into the public domain, This restored print is © 1994. 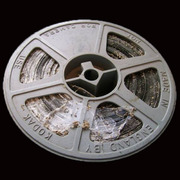