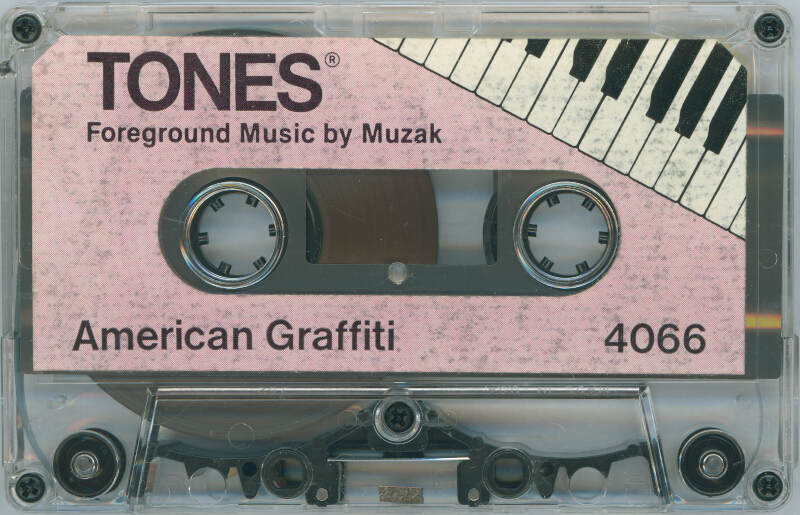 A wonderful programme of 1950s/1960s oldies and doo-wop classics. The music format mostly parallels what I grew up listening to on KKSN-FM in its heyday as an oldies station (and what my parents/grandparents used to hear on the original KISN on 910 kHz, back when all this stuff was current), but a bit more diverse. For example, KKSN never played reggae and probably didn't, as far I know, anyways, play blues. It includes many selections that appeared on the film's massive 41-track, double-LP/CD soundtrack album (albeit collected from different albums/compilations, as the playlist states).

The tape was mastered for the Muzak CP1600 4-track dual deck, which uses an odd unidirectional track arrangement. Basically all four tracks run the same forwards direction (like they would on a Fidelipac cart) and there is a 25 Hz cuing tone at the end of each track to automatically rewind the tape and switch to the next track; rinse and repeat.* But it's why the audio in the quote-unquote "side 2" unprocessed file is reversed and channel-swapped. Slow, awkward and inefficient, and was replaced by the much simpler bidirectional CP2500 in the mid 1990s. The CP2500 system was Muzak's version of the AEI Propac 4, the only differences being cosmetic (they had different front-panel controls).....in fact, later examples *were* Propac 4+ decks with Muzak's decals replacing the AEI ones.

[ * This is actually the same configuration the mid-1990s Tiger revival of the "2-XL" toy robot/quiz machine used, if you've ever played with one of those, though the CP1600 predates it by several years. (The original 1970s Mego version used 8-track carts.) I don't know if the 2-XL used 25 Hz EOM cues. Theoretically you could put a CP1600 cassette in the unit and it should play, pressing the toy's buttons to change tracks. If you still have a working Tiger 2-XL, grab the unprocessed PCMs, write them to a cassette and try it. If anybody's done that and had it work please do leave a comment. This may have been at least part of the reason why Muzak abandoned the 1600 for the Propac! ]

The "Tones" tape exchange was a service Muzak inherited from their buyout of Yesco in 1989, which they continued until about 2000. They also published Fidelipac carts until at least 1997.

The tape was recorded at 1 7/8 IPS. The 1600 could be switched to run at 15/16 IPS, but I believe this function was rarely used. I have speed-corrected the audio -2.5% since it was a little fast; possibly Muzak had a mastering system that was running slow so the audio was pitched up. The 2-channel tape-in files were split to mono tracks for presentation and tracks 3 and 4 were reversed to play in the correct direction since this transfer was done using a conventional bidirectional stereo deck (compare to the unprocessed PCM files which are the raw audio as it came off the deck). There were also long trailing silences at the ends of each block which I have trimmed off, so they flow properly when played in sequence. No other processing or editing has been done. Notes
DOWNLOADING
When downloading this recording e.g. for local listening or to post elsewhere, please select only the original high-bitrate PCM ("WAVE" option) files. The lossy MP3 files for immediate previewing in the built-in Web player above were encoded from the PCM files using LAME 3.99.5 Linux (command $ lame -b128 -mm -o -q0 "'filename.wav]") but for optimal listening please download and use the PCM version. The FLAC files listed are Archive's own autoderivatives and cannot provide technical support if you download them. Master files are encoded as 44100 Hz 16-bit linear PCM (RIFF header). The unprocessed tape-in files are also provided for reference.

LICENCE
For private listening (home/headphones/car) and historical-interest uses only. If you want to play this music in a business, you will need to contact Mood Media and set up a subscription.