This upload contains 19 different Old Time Radio programs directly related to America's involvement in World War II.  There are a total of 375 episodes included here.  The programs range from documentary to dramatic to news, and all provide an excellent look at what life was like during the War.
The dates, episode numbers and titles are believed to be correct based on available information, but any corrections are welcome.
The programs included are:
1. America Looks Abroad (1939-1941) - 48 episodes.  This program was an informational show on NBC produced in association with the Foreign Policy Association to help educate Americans on the war events in Europe.
2. An American in England (1942) - 7 episodes. This program was a documentary reflecting Norman Corwin's experience in England during the War.
3. Battle Stations (1943) - 4 episodes.  This dramatic program was produced by the U.S. Navy to help the American people understand the Navy's role and successes in the war.  These 4 episodes represent the complete show.
4. Eyes Aloft (1942-1943) - 18 episodes.  This program was created to drive home the importance and achievements of the Aircraft Warning Service, civilian volunteers who watched the skies along the West Coast.
5. Man Behind the Gun (1942-1944) - 9 episodes. A dramatic documentary that helped bring the heroics of our armed forces back to the people on the home front.  Sadly only a few episodes of this fantastic series remain.
6. Men at Sea (1943-1945) - 12 episodes.  This show focused on and promoted the crucial efforts of the Merchant Marine to get supplies to the men on the front lines.
7. Soldiers of the Press (1942-1945) - 42 episodes. This 15-minute show featured eyewitness reports on events around the world from the war correspondents who covered them.  An excellent first-hand view of the war.
8. Sound of War (1965) - 18 episodes.  This retrospective, produced 20 years after the end of World War II, documents some of the key moments of the war with historic recordings and broadcasts from during the war.
9. This is War (1942) - 6 episodes. Norman Corwin, a giant in radio, directed this 13-part series attempting to relate the war to society at home.  Sadly only 6 of the episodes remain.
10. War Telescope (1942-1944) - 40 episodes. This 15-minute weekly program featured the reporting of Elmer Peterson, a newsman based in London during the war.  It is an excellent primary source of information about what was happening each week during the war.  (Updated 6/26/20 to add 7 new episodes)
11. Wings to Victory (1942-1943) - 11 episodes. This patriotic show focused on the heroics of the U.S. Army Air Force and sought to encourage enlistment.  (Updated 6/26/20 to add 3 new episodes)
12. Words at War (1943-1945) - 90 episodes. This dramatic anthology was based on books written during the war and was used to tell stories of the war and educate Americans about key issues facing the Armed Forces and the country.
13. You Can't Do Business With Hitler (1942) - 12 episodes.  Based on a book written by Douglas Miller, this show attempted to drive home the threat and danger of Hitler and Nazi Germany.
14. Your Army Air Force (1945) -12 episodes.  Similar to Wings to Victory, this program focused on the heroics of the U.S. Army Air Force during the war and stress the importance of air power during and after the war.
15. Dear Adolf (1942) - All 6 episodes.  This program, based on the book of the same name, focused on messages from 6 different and unique segments of Americans, sending a message of freedom and liberty in the face of the fascism of Nazi Germany. (Updated 6/26/20 to add the entire program).
16.  Four for the Fourth (1944) - All 4 episodes.  This program features four plays by Arch Oboler in support of the Fifth War Bond Drive.  Unfortunately episode 1 is of poor quality.
17. Plays for Americans (1942) - 3 episodes.  This program aired for 20 weeks in early 1942.  Written by Arch Oboler, the plays were intended to support the war effort.  Unfortunately only 3 of the 20 episodes appear to have survived.
18. What Are We Fighting For (1942) - Complete Series (6 episodes).  This program was produced by the War Department and CBS to help educate the U.S. Armed Forces about the reason for fighting in WWII.  Of note is the sixth episode, a speech by Sergeant York, WWI hero.
19. Speaking of Liberty (1941) - 24 episodes. This program aired in 1941 before America entered WWII to describe some of the key issues of the European War, as well some of the key aspects of American liberty.
Initial upload: 4/23/2020 (312 episodes from 14 programs)
1st update: 6/26/2020 (16 episodes, including all 6 of Dear Adolf, 3 episodes of Wings to Victory, and 7 episodes of War Telescope)
2nd update: 10/5/2020 (All 4 episodes of Four for the Fourth)
3rd update: 10/20/2020 (3 episodes from Plays for Americans)
4th update: 11/4/2020 (What Are We Fighting For and Speaking of Liberty)
5th update: 3/13/2021 (Men at Sea episode 8/13/44 and Words at War episode 4/4/1944)
6th update: 7/18/2021 (6 Words at War episodes)
7th update: 1/8/2023 (2 Soldiers of the Press episodes - #116 and 117) 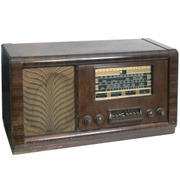