The Book Of Jasher 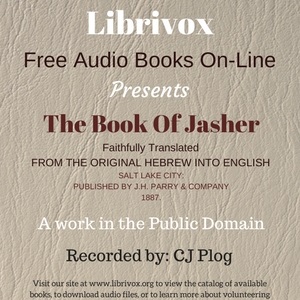 The Book Of Jasher

LibriVox recording of The Book Of Jasher by Anonymous. (Translated by Moses Samuel.)
Read in English by CJ Plog
Jasher (The Sefer haYashar (first edition 1552) The Hebrew title may be translated Sefer haYashar - "Book of the Upright" - but it is known in English translation mostly as The Book of Jasher following English tradition. The book is named after the Book of Jasher referenced In Joshua 10:13; 2 Samuel 1:18; And 2 Timothy 3:8.
Jasher is an historical text that covers the time period from Creation through Isreal's journey into Canaan. - Summary by CJ Plog.
For further information, including links to online text, reader information, RSS feeds, CD cover or other formats (if available), please go to the LibriVox catalog page for this recording.

Reviewer: Techlarapoint - favoritefavoritefavoritefavorite - March 16, 2022
Subject: Amazing Book
It starts out, as all fabrications do, in a fairly respectable manner; holding closely to the Biblical record; interjecting details that seem plausible, at first.
https://techlarapoint.com/bombitup-apk/

Reviewer: !HAM1 - favorite - March 15, 2022
Subject: THE BOOK OF OCCULT AND MAGIC
BOOK OF OCCULT:
“The Book of Jasher” as it comes to us today, is descriptively mentioned to us, in the Holy Word of God, in 2Peter 1:16 and Titus 1:14. This book, no-doubt, has its origin among those whose star is that of Remphan, for the purpose of turning people from the truth; for its fables are cunningly woven amongst a good knowledge of Hebrew history.

It starts out, as all fabrications do, in a fairly respectable manner; holding closely to the Biblical record; interjecting details that seem plausible, at first. But, after it is hoped, that the reader has been “taken in”, as though One has discovered a great ancient find and addition to the Holy Scripture, they begin to lay-out increasingly ridiculous and Occult ideas that are foreign to the Teachings and Commands of the ALMIGHTY.

0ne example of this is that is proposes that Joseph as well as the whole house of Jacob were acquainted with and conversant in . . .ASTROLOGY. Another is the preposterous idea that Isaac took Rebekah to be his wife, when she was 10 years old. . .promoting pedophilia. . .Really people!. . .just read that and then rip up and throw away this Occultist rag. There is a reason why the Rosicrucian and other such Cults peddle this book.

“Jasher”, unlike credible hidden or lost books, was NOT quoted by the Early Church Fathers, at least from the Apostle’s Day to 300 a.d.; is not quoted IN the Scriptures, anywhere [The Scriptures merely mention such a book; no way to verify that the book that just showed up in the 1700’s is the same book that is mentioned]; and was NEVER a part of the Scriptural Cannon [The Roman Catholic Church had nothing to do with it being omitted from the Cannon of Scripture]. Whereas, much of what is called “The Apocrypha” remained in Scripture copies, at least from the days of the Septuagint [250 b.c] up to 1885 a.d.; both the King James Version and the Geneva [The 1st English translation to split text into chapters and verses] contained these “Lost” books.

This book of “Jasher” shows no such pedigree; and its friends should signify to those who “love the Truth”, that this book comes from their enemies.

Uploaded by librivoxbooks on January 22, 2017