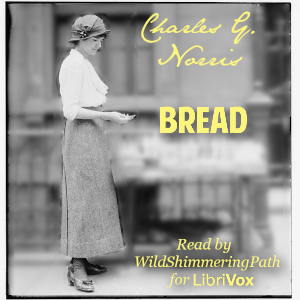 LibriVox recording of Bread by Charles G. Norris.
Read in English by WildShimmeringPath
Bread by Charles G. Norris reads like a working class Great Gatsby with a tragic female main character. The author is said to have influenced F. Scott Fitzgerald. There is a kind of cadence to the writing, and arc to the story where this can be felt in both similarity and contrast. It follows the life of a woman from young adulthood to middle age between the years of 1905 to 1922 in New York City. She is a stenographer, has chosen the then taboo path of a “wage earner” as opposed to that of mother/wife/homemaker. The descriptions of the inner workings of a publishing house in a time when the printed word was still the apex of information technology are vivid. The social and domestic situations are touching and emotionally telling of how, however much things change, they also stay the same. The metaphor of “Bread” is quaintly heavy handed. “Dedicated to the working women of America”, Norris gives us the “straight dope” in this depiction of life in New York City in the early 20th century. - Summary by WildShimmeringPath
For further information, including links to online text, reader information, RSS feeds, CD cover or other formats (if available), please go to the LibriVox catalog page for this recording.

Uploaded by librivoxbooks on January 5, 2022