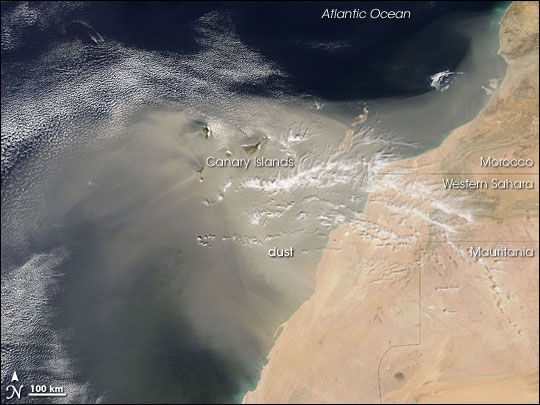 On March 10, 2007, thick plumes of dust blew off the west coast of Africa and over the Canary Islands. The Moderate Resolution Imaging Spectroradiometer ( modis.gsfc.nasa.gov MODIS ) on NASA's aqua.nasa.gov/ Aqua satellite took this picture the same day. In this image, the tan dust strikes a strong contrast with the navy blue ocean. The dust plumes are thickest over the Canary Islands, almost thick enough to completely obscure the satellite's view of them. The dust plumes thin somewhat north and south of the islands. In the areas with thinner dust plumes, in a few isolated spots, the seawater appears green under the dust. This may result from sediment, shallow water, or both.

Whereas many deserts consist of largely of bedrock and gravel, with just some sand, one-fifth of the Sahara is covered in sand, with dunes rising to 300 meters (1,000 feet) in places. As the Sahara regularly exports dust across the Atlantic Ocean, giving the Canary Islands a dusting requires a relatively short trip: the easternmost island is just over 100 kilometers (60 miles) from the African coast.

In many instances, Saharan dust travels all the way to the Caribbean. There, the dust plays a dual role. While it can carry bacteria and fungi that harm Caribbean corals, it also provides soil for the local islands. Without Saharan dust, few plants might grow in the Caribbean. Saharan dust may also play a role in mitigating the Atlantic hurricane season. On February 27, 2007, William Lau of NASA Goddard Space Flight Center and Kyu-Myong Kim of the University of Maryland published an article in EOS hypothesizing that repeated dust storms from Africa in summer 2006 blocked incoming sunlight, cooled the sea surface, and hampered hurricane development.

Uploaded by Greg Williamson on August 1, 2011