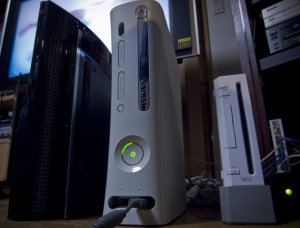 This is a large collection of manuals for home console games, dedicated machines for entertainment created since the 1970s.

Xbox (stylized as XBOX) is a video gaming brand created and owned by Microsoft. It represents a series of video game consoles developed by Microsoft, with three consoles released in the sixth, seventh, and eighth generations respectively. The brand also represents applications (games), streaming services, and an online service by the name of Xbox Live. The brand was first introduced on November 15, 2001 in the United States, with the launch of the original Xbox console.

Sega Saturn Magazine was a monthly UK magazine dedicated to the Sega Saturn. It held the official Saturn magazine license for the UK, and as such some issues included a demo CD created by Sega, called Sega Flash, which included playable games and game footage. The last issue was Issue 37, November 1998. Sega Saturn Magazine was originally known as Sega Magazine which launched in 1994 and covered the Sega consoles available at the time, including the Sega Master System, Sega Mega Drive, Sega...

The PlayStation (Japanese: プレイステーション Hepburn: Pureisutēshon?, officially abbreviated PS) is a series of video game consoles created and developed by Sony Computer Entertainment with consoles in the fifth to eighth generations. The brand was first introduced on December 3, 1994 in Japan with the launch of the original PlayStation console. It now consists of a total of four core home consoles, as well as a media center, an online service, a line of controllers, two handhelds...

The Dreamcast (Japanese: ドリームキャスト Hepburn: Dorīmukyasuto?) is a home video game console that was released by Sega on November 27, 1998 in Japan, September 9, 1999 in North America, and October 14, 1999 in Europe. It was the first entry in the sixth generation of video game consoles, preceding the PlayStation 2, Xbox and GameCube. The Dreamcast is Sega's last home console to date, with no successor released since its discontinuation.

Scanned manuals for software that ran on the Sega Master System (known as the Mark III in Japan), a game console from the 1980s.

Manuals and instructions for the Neo Geo arcade systems and home console.

The Sega Genesis, known as Mega Drive (Japanese: メガドライブ Hepburn: Mega Doraibu) in most regions outside North America, is a 16-bit home video game console which was developed and sold by Sega Enterprises, Ltd. The Genesis is Sega's third console and the successor to the Master System. Sega first released the console as the Mega Drive in Japan in 1988, followed by a North American debut under the Genesis moniker in 1989. In 1990, the console was released as the Mega Drive by Virgin...

The Sega CD, released as the Mega-CD (メガCD Mega-Shī Dī?) in most regions outside North America, is an add-on device for the Sega Genesis video game console designed and produced by Sega as part of the fourth generation of video game consoles. The add-on was released in Japan on December 12, 1991, in North America on October 15, 1992 and in Europe in the spring of 1993. The device adds a CD-ROM drive to the console, allowing the user to play CD-based games and providing additional hardware...

The SG-1000 (Japanese: エスジー・セン Hepburn: Esu Jī Sen?), also known as the Sega Computer Videogame SG-1000, is a cartridge-based home video game console manufactured by Sega and released in Japan, Australia, and other countries. It was Sega's first entry into the home video game hardware business, and provided the basis for the more successful Master System. Introduced in 1983, the SG-1000 was released on the same day that Nintendo released the Family Computer (Famicom for short) in...

he Sega 32X is an add-on for the Sega Genesis video game console. Codenamed "Project Mars", the 32X was designed to expand the power of the Genesis and serve as a transitional console into the 32-bit era until the later release of the Sega Saturn. Independent of the Genesis, the 32X utilizes its own ROM cartridges and has its own library of games. The add-on was distributed under the name Super 32X (スーパー32X Sūpā Sātī Tsu Ekkusu?) in Japan, Sega Genesis 32X in North...

Manuals for the games released on the Atari 5200
Topics: Manuals, Game Manuals, Atari, 5200

The 3DO Interactive Multiplayer (often called simply 3DO) is a video game console developed by The 3DO Company. The 3DO was released in North America on October 4, 1993, Japan on March 20, 1994 and in Europe in 1994. The system was conceived by entrepreneur and Electronic Arts founder Trip Hawkins. Instead of The 3DO Company producing the console themselves, they licensed other manufacturers to produce them. Panasonic produced the first models in 1993, and further renditions of the hardware...

A collection of manuals for cartridges for the Turbo Grafix 16, a home console created by Hudson Soft and NEC.

The ColecoVision is Coleco Industries' second generation home video game console, which was released in August 1982. The ColecoVision offered near-arcade-quality graphics and gaming style along with the means to expand the system's basic hardware. Released with a catalog of 12 launch titles, with an additional 10 games announced for 1982, approximately 145 titles in total were published as ROM cartridges for the system between 1982 and 1984.[1] River West Brands currently owns the ColecoVision...

The Nintendo 64 (ニンテンドー64 Nintendō Rokujūyon?), stylized as NINTENDO64 and often referred to as N64 (formerly known as the Nintendo Ultra 64, and codenamed Project Reality) is Nintendo's third home video game console for the international market. Named for its 64-bit central processing unit, it was released in June 1996 in Japan, September 1996 in North America, March 1997 in Europe and Australia, September 1997 in France and December 1997 in Brazil. It is Nintendo's last home...

Manuals for the Mattel Intellivision.

Pioneer's purpose of adding the Laser Vision interface to this MSX computer was obviously to create a multimedia machine which could be used for adding pictures and texts to video movies (superimposing) and mainly to contol the Laser Disc player in several ways. Some special games were available on Laser Discs for MSX, in which laser disk video is used for backgrounds of games, the MSX1 graphics superimposed on them. The "multimedia" MSX1 was already available since 1984! Here is an...

The Virtual Boy (バーチャルボーイ Bācharu Bōi?) (Originally known as VR-32.) is a table-top video game console developed and manufactured by Nintendo. It was marketed as the first "portable" video game console capable of displaying "true 3D graphics" out of the box. It was released on July 21, 1995 in Japan and August 14, 1995 in North America at a price of around US$180. It proved to be a commercial failure and was not released in other regions. Its lukewarm...

Manuals for the games released on the Atari 2600
Topics: Manuals, Game Manuals, Atari, 2600

In 1989, Nintendo of America teamed up with Topps to craft a revolutionary idea. trading cards based on video games!

The Philips CD-i (Compact Disc Interactive) is an interactive multimedia CD player developed and marketed by Royal Philips N.V. This category of device was created to provide more functionality than an audio CD player or game console, but at a lower price than a personal computer with a CD-ROM drive at the time. The cost savings were due to the lack of a hard drive, floppy drive, keyboard, mouse, monitor (a standard television was used), and less operating system software. In addition to games,...

The Nintendo Entertainment System (also abbreviated as NES) is an 8-bit home video game console that was developed and manufactured by Nintendo. It was initially released in Japan as the Family Computer (ファミリーコンピュータ Famirī Konpyūta) (also known as the Famicom (ファミコン Famikon) and abbreviated as FC) on July 15, 1983, and was later released in North America during 1985, in Europe during 1986, and Australia in 1987. In South Korea, it was known as the Hyundai...

Manuals for the Game Boy Advance. The Game Boy Advance, often shortened to GBA, is a 32-bit handheld video game console developed, manufactured and marketed by Nintendo. It is the successor to the Game Boy Color. It was released in Japan on March 21, 2001; in North America on June 11, 2001; in Australia and Europe on June 22, 2001; and in the People's Republic of China on June 8, 2004 (excluding Hong Kong).

Super Nintendo Manuals
Legend Of Zelda, The A Link To The Past ( USA)
texts

The Legend of Zelda - A Link to the Past US SNES Manual
Topics: SNES Manual, Game Manual, SNES, Super Nintendo

The Astrocade is a second generation video game console and simple computer system designed by a team at Midway, the videogame division of Bally. It was marketed only for a limited time before Bally decided to exit the market. The rights were later picked up by a third-party company, who re-released it and sold it until around 1983. The Astrocade is particularly notable for its very powerful graphics capabilities for the time of release, and for the difficulty in accessing those capabilities....

Dragon Data was a Welsh producer of home computers during the early 1980s. These computers, the Dragon 32 and Dragon 64, strongly resembled the Tandy TRS-80 Color Computer ("CoCo")—both followed a standard Motorola datasheet configuration for the three key components (CPU, SAM and VDG). The machines came in both 32KB and (later) 64KB versions. The history of Dragon Data in the period 1982–84 was a chequered one. The company was originally set up by a Toy Company called Mettoy, and...

The Sorcerer was one of the early home computer systems, released in 1978 by the videogame company, Exidy. It was comparatively advanced when released, especially when compared to the contemporary more commercially oriented Commodore PET and TRS-80, but due to a number of problems including a lack of marketing, the machine remained relatively unknown. Exidy eventually pulled it from the market in 1980, and today they are a coveted collector's item. This is a collection of manuals for programs...

DESCRIPTION
This is a large collection of manuals for home console games, dedicated machines for entertainment created since the 1970s.
ACTIVITY