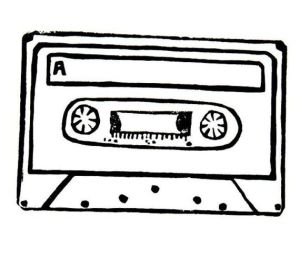 Demo Tapes are recordings (once on cassette or reel to reel, although CDs and digital files have taken their place) created by artists who are working on example versions of their songs and audio, often with the intention of sharing with bandmates, or providing to managers and contributors for potential choices for final release. They range from unique initial versions of later popular songs, to never-otherwise-recorded efforts, saved once on one tape.

Promo for New York singer Misty,. She had several releases on Mixed Emotions Records Co, and a music video with her single I'm Gonna Shake You Up.
Topics: 80s pop, demo tape, cassette

Demo from Asbury Park, NJ Klezmer band.  They played at at the PNC Bank Arts Center in Holmdel in September 1998. Nothing else is known about them.
Topics: klezmer, cassette, demo tape, lost music

Demo tape featuring songs by musicians John Caruso and Richard Marcus, who have both been very active working on music in film & television, among other things. Also included is their song "It's Great To Be A Pirate", written for an unproduced Aladdin sequel.
Topics: demo tape, cassette, children's music, music

first demo-tape of the german gothic/rock band Giants Causeway recorded and released in 1991 and check out this artist too: A DEATH CINEMATIC
Topics: giants causeway, gothic, rock, demo, kalle

Date unknown.  Walker and Wolfe are classically trained singers and dancers who were members of the original production of Godspell and have toured as a duo.
Topics: demo tape, cassette, found audio

The Demo Tape and Rough Audio Draft Collection
Carol Duboc - You're All I Ever Needed (Unreleased Studio Demo, 1993)
by Carol Duboc
audio

One of several demo tapes I obtained of singer Dina Claire.  Same program on both sides.
Topics: demo tape, cassette

Sweet Tyme was a Canadian acapella trio consisting of Sue Goldberg, Karen Kaplan and Susan Lawrence, from somewhere in the Toronto Area. Can't find any information on them at all, but there's an E-mail address on the tape, so I believe this is from between the mid-late 90s.
Topics: music, cassette, demo tape, acapella, canadian folk music

Opera demo tape by NY based singers, Michael Crouse (Tenor) and Rose Marie Guariglia (Soprano), who later married Crouse. Rose Marie Crouse, soprano, born Rose Marie Guariglia, is a graduate of the Juilliard School and began her career singing the role of Magda in "La Rondine" with the Juilliard Opera Center. Ms. Guariglia was subsequently engaged by the San Francisco Opera to perform the role of Rosalinda in "Die Fledermaus" and Violetta in "La Traviata" The...
Topics: cassette, tape rip, opera, demo tape

Home-recorded 90s acoustic folk by Ramona Sweeney, who I cannot find any info on. The first 2 songs are pretty, sunny tracks, and the third is fast and rockabilly-esque.
Topics: demo tape, lost media, cassette, folk music

This 1986 Dead Center demo tape was discovered on eBay during a search for "The Mysterious Song" (also called "Like The Wind").  It is not the music we were looking for, but it's good.  Unfortunately, the tape was recorded on a cheap Walmart tape recorder, and has multiple glaring issues in terms of quality.  This is not a massive improvement, but it is far more listenable, and should fix issues playing the song through mono speakers (such as those on phones).  Also...
Topics: punk, new wave, punk wave, '80s, pop, music, mr. cool, dead center, ep

Date unknown, ripped from the original studio tape. Deane Hawley is best known for his cover of Look For A Star, which reached #29 on the Billboard 100 in mid 1960. This was recorded in the 80s or 90s.
Topics: found audio, studio demo, pop demo, 60s pop, look for a star, lost music, unreleased demos, lo-fi,...

Unreleased demo tape, vocals & piano. Bryant was born in 1961 and might be a resident of Duluth, Georgia (Though I am not sure). He specialises in solo piano instrumentals and vocal ballads. He actively posts on YouTube and SoundCloud: https://www.youtube.com/channel/UC5npSTNh3FIf2kWzONotaAw/videos https://soundcloud.com/michael-bryant-41
Topics: demo tape, cassette, lost music, tape rip, demo, music

DESCRIPTION
Demo Tapes are recordings (once on cassette or reel to reel, although CDs and digital files have taken their place) created by artists who are working on example versions of their songs and audio, often with the intention of sharing with bandmates, or providing to managers and contributors for potential choices for final release. They range from unique initial versions of later popular songs, to never-otherwise-recorded efforts, saved once on one tape.
ACTIVITY