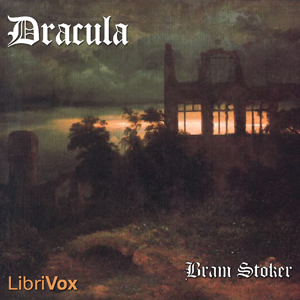 The classic vampire story by Bram Stoker revolves around a struggle between good and evil, tradition and modernity, and lust versus chastity. The author didn't invent vampires, but his novel has so captured the public's imagination that he is rightly considered their popularizer. Listen and you will meet not only the Count himself, but heroes Jonathan Harker and Abraham Van Helsing, plus an array of madmen, psychiatrists, and fair maidens who cross paths with the fanged menace. (Summary by Paula)

Reviewer: Jonkermeister - favoritefavoritefavoritefavorite - October 31, 2021
Subject: ScreamingMeanies
Having listened through 1/2 the book I am truly thrilled and enthralled. I have frequently heard what a literary classic this work is but knowing it’s a lengthy work and not caring for abridgments had steered clear of it. Besides the media being glutted with the misplaced romanticization and popularization of vampires in recent years finding vampires everywhere one looks. I believe some here who’ve been very critical of the readers need remember they are after all volunteers and not paid actors.

Reviewer: barticle - favoritefavoritefavoritefavoritefavorite - September 9, 2016
Subject: Great Book
I had read this book years before and thought I remembered it, but I had forgotten what a good writer Bram Stoker was. I found it rewarding to hear it again. As for the readers, it's true Marla's voice is strange and can be irritating, but I soon got used to it, perhaps in part because of the strangeness of the material. I wish to thank all the volunteer readers for their effort.

Reviewer: Stashhound - favoritefavoritefavorite - March 8, 2016
Subject: For the price.
This was terrific. Thank you all that was involved in this
production.

This particular recording was recorded only a few months after LibriVox started, as you can see from its date. In some (not all) early recordings, quality could be a bit variable. If you prefer readings by a solo reader, perhaps it would be better if you were to search the LibriVox catalogue for solo readings only. (Click on "Advanced Search" below the general search box.)

As for group readings being "unnecessary", I assure you that many books would never be recorded at all without collaborative recordings, as very few people have the time to record a whole book. You probably do not know how time-consuming recording and editing is.

Thank you so much for making this. I am thoroughly enjoying it. (Reader EM: in the future, you might consider not starting sentences really loud, then trailing off at the end. Also, maybe it was your intended character, but the nasal sound was difficult to listen to, so you might try another character voice and see if that works better.)

Great job guys! Thanks!
Reviewer: tauntonlake - favoritefavorite - February 17, 2012
Subject: OMG.. a couple of the readers need to go away..
I agree with the comments on here -- The story itself is excellent. very gripping tale.

However.. there are a couple of volunteer readers, this book could have done without. Marlo Dianne overdramatizes her entire part, reading so slooooowly and voluuuuptuously, that she sounds like she's reading for Hustler Forum. very distracting and downright painful to listen to.
Same to the fellow who read Jonathon's Harker's part, in the scene where he is about to be bit by the three vampiresses in Dracula's castle. too overdramatized and excessively drawn out. trying to sound sexy, but failed miserably. just read the darn part, without trying for some Academy Award performance! Sorry to be harsh, but these two generous volunteers, were actually painful to listen to.

and the sea captain's parts with the Scottish accent, was just BRUTAL.

Thank you for having a forum to vent about this, because I actually got to the point of talking aloud to the recording, so annoyed and distracted by how bad a couple of the "performances" were. :(

Chapter 23 is also particularly bad :( The poor girl reading sounds like she is doing a recitation in a remedial reading class -- reads too fast, mis-prononounces a lot of words, trying to speed over the big words .. sorry, I hate to say this, but she should not be trying to read literature aloud for listeners.

I was relieved when "K-Ray" started up Chapter 24. And then dismayed anew as Ms. Marlo Dianne returned for the final chapters 26 and 27 (the worst reading of the whole book) - her portrayal of Dr. Van Helsing with a Scottish+who-knows-what-else variety of accents, and drunkenly slurred throughout, to boot, is absolutely criminal. The only reason I endured it, was to find out the end of the story! :( I know Librivox doesn't turn away volunteers, but COME ON !! :( if it's going to be read badly, why have it read at all ?
Reviewer: sayuri54 - favorite - October 20, 2011
Subject: terrible accents
I love this book, but unfortunately this Livribox reading was done by VARIOUS volunteers. Some are very good but most are awful. Every time Van Helsing's diary is read a different accent is used. I must admit that is was entertaining to listen to "Arnold Schwarzenegger as Van Helsing", "Russian/Irish Van Helsing", Hindu Van Helsing but my favorite was "Drunk Van Helsing" for she slurred the words in a most painful manner. Every person tried to fake an accent and it is was at times unintelligible. Some volunteers have background noise such as the sound of ice cubes in a glass full of drink, a harsh sudden noise as if rough fabric were rubbing against the microphone. Personally I do not enjoy listening to different people with different tones and speeds reading the same book . I find it unnecessarily distracting if not at all unnecessary.
Reviewer: ShahShazaib - favoritefavoritefavoritefavoritefavorite - October 5, 2011
Subject: Typical English Literature
This is just not a book, its a reality or should i say a hoax that took the England by surprise after its publications.. Before i studied this book, i had heard a lot of reviews about this book which surely were encouraging enough for me to catch my attention..
The best think about the literature is the chain that the author creates between the incidents that happen.. The author has characterized everything so eloquently that i had a clear picture in my mind..
Reviewer: Roman100 - favoritefavoritefavoritefavorite - October 2, 2011
Subject: Dracula
The telling of the story is spotty because of (a) the number of readers and (b) the great variation in the quality of their respective readings, which ultimately distracts and exasperates. Still, this is an immortal work in its genre and is certainly worth a listen!
Reviewer: mothergoosse - favoritefavorite - July 18, 2010
Subject: New readers needed
I actually found the readings by Marlo Dianne to be absolutely painful to listen to. Her only method of dramatic reading is to whine. I have begun to skip the chapters that she reads and now read the text for myself. The other readers are OK. It does kill the flow to have so many different people read. Oh, and if you are going to bother to do an accent for a character, make sure it's the right one...
Reviewer: krystalsmeagol2 - favoritefavoritefavoritefavoritefavorite - July 7, 2010
Subject: dracula
love it!!
Reviewer: Krissander - favoritefavoritefavorite - April 10, 2010
Subject: Dracula
I thoroughly enjoyed this recording, although that was due more to the content than some of the readers. Mispronuciations of some of the names was frustrating and one reader insisted on extending the authors christian name to Braaam Stoker. However, there were some outstanding readers whom I would have happily listened to for hours.
This book has also been comercially produced as an abridged audio book by Hamlyn books and was very well read by the British actor Michael Horden.
Reviewer: Iggy-B - favorite - November 17, 2009
Subject: Reading
I agree with u guys, its annoying and very hard to follow... arrr...
Reviewer: zz_07 - favoritefavoritefavorite - October 23, 2009
Subject: Mixed...
I agree with the other reviewer here. Some of the readers are great, some less so. One common mispronunciation is of the word 'Godalming', often pronounced 'God-dal-ming'. Meanwhile, some read too hastily, or place stress in such a way that makes it hard to discern the meaning of the sentence. But overall, not at all bad, and thanks to all the readers.
Reviewer: Fini - favoritefavoritefavorite - August 24, 2008
Subject: multi reader version
This story is excellent, but I was rather disappointed with the reading of it. Multiple readers make for a strange listening experience. Some are first class, others not so good.