The Dream of the Red Chamber Book I 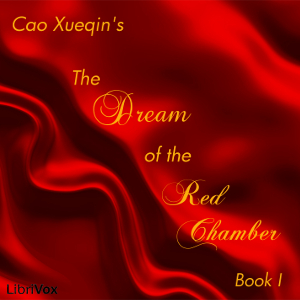 The Dream of the Red Chamber Book I

LibriVox recording of The Dream of the Red Chamber Book I by Xueqin Cao. (Translated by Henry Bencraft Joly.)
Read in English by LIbrivox volunteers.

The Dream of the Red Chamber (also known as The Story of the Stone) is one of the Four Great Classical Novels of China, and considered the greatest of them all. Almost 40 main characters and some 500 minor characters tell the fortunes of the Chia family; the book details mainly the life of Chia Pao-yü, the heir apparent, who is described as very intelligent, but also as carefree and self-indulging. The already wealthy Chia family rises to new heights when Pao-yü's elder sister becomes an imperial consort. On her first visit home, a lush garden is built, where much of the rest of the story takes place. The intrigues surrounding Pao-yü and his cousins, especially Lin Tai-yü who he loves, and Hsüeh Pao-ch'ai who he is finally tricked into marrying, make up a large part of the story. The decline of the Chia family begins with the death of the imperial consort, and when they fall into disfavour with the emperor, their mansions and the garden are eventually destroyed.

The whole book has 120 chapters, only 80 of which were written by Cao Xueqin before his death in 1764. Cheng Weiyuan and Gao E claimed to have access to Cao's papers, and published what is now known as the Cheng-Gao version in 1791. Henry Bencraft Joly translated only part of the book written by Cao. Book I contains the first 24 chapters, Book II ends abruptly with chapter 56; a Book III was never published.

Reviewer: Oudoul - favoritefavoritefavoritefavoritefavorite - March 8, 2022
Subject: Consistency with pronounciation of names
But Elisabeth Buchanan, who reads most recordings, although native English speaker, pronounces names of both the author and one of the main characters, wrong.
Then she strains her throat too much when speaking for some of the characters.

Reviewer: berenike - favoritefavorite - December 3, 2019
Subject: same as the other volume.
The reader was overconfident of her knowledge of English. She gets about every third word wrong, more if there is a word in there that ends in "n" which she pronounces as "ng" even when it isn't part of an "ing" ending. I know it was a big job, but somebody else should have done it.