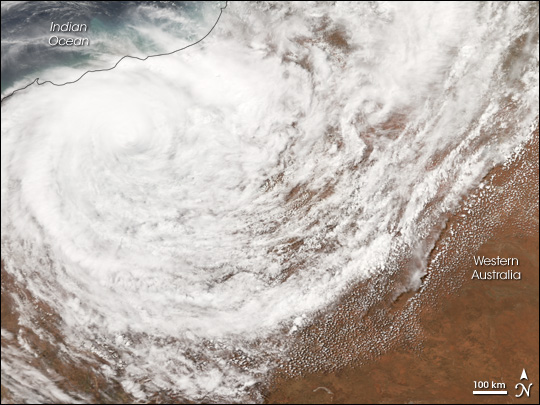 Tropical Cyclone George came ashore on the remote Pilbara coast of Western Australia on the evening of March 8, 2007, as a very powerful www.nhc.noaa.gov/aboutsshs.shtml Category 4 storm, with wind speeds as high as 275 kilometers per hour (170 miles per hour). According to the online version of the Sydney Morning Herald, www.smh.com.au/news/national/cyclone-george-kills-two-jacob-advances/2007/03/09/1173166991751.html the storm was responsible for at least two deaths and many serious injuries as of March 10.

This photo-like image of George was acquired by the Moderate Resolution Imaging Spectroradiometer modis.gsfc.nasa.gov/ (MODIS) on the aqua.nasa.gov/ Aqua satellite on March 9, 2007, at 1:25 p.m. local time (05:25 UTC). The storm was still a strong tropical cyclone with a circular shape and distinct eye at its center, despite the fact that the storm had been traveling over land for nearly a day when the image was captured. According to the University of Hawaii's http://www.solar.ifa.hawaii.edu/Tropical/ Tropical Storm Information Center, Cyclone George had sustained winds of 120 kilometers per hour (75 miles per hour) near the time this image was acquired.

George was the worst storm to hit the area in 30 years, and the government declared the region a disaster area. Rescue and recovery efforts were expected to be complicated by the arrival of Cyclone Jacob. As a Category 2 storm, Jacob was smaller and weaker, and it was not expected to wreak the same kind of destruction as George.

You can download a eoimages.gsfc.nasa.gov/images/imagerecords/18000/18088/george_amo_2007068.kmz 250-meter-resolution Cyclone George KMZ file for use with earth.google.com/download-earth.html Google Earth.

Uploaded by Greg Williamson on August 1, 2011