History of Henry the Fourth King of France and Navarre 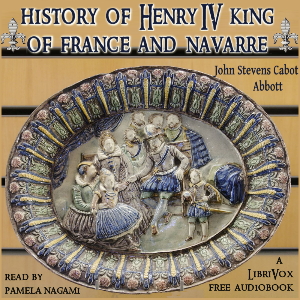 History of Henry the Fourth King of France and Navarre

LibriVox recording of History of Henry the Fourth King of France and Navarre by John Stevens Cabot Abbott.
Read in English by Pamela Nagami
Henry IV, King of France and Navarre (1553-1610) was the first monarch of France from the House of Bourbon. He was raised in the Protestant faith, barely escaped death in the St. Bartholomew's Day massacre, and led the Protestant forces against the Catholic armies in the French Wars of Religion. Declaring that "Paris was well worth a mass," he abjured the Calvinist faith, which brought an end to the pitiless strife that was destroying France. "Good King Henry" is remembered for his courage in battle, his geniality, and his great concern for the welfare of his subjects. A survivor of multiple assassination attempts, he succumbed to the knife of François Ravaillac in 1610. (Pamela Nagami, M.D.)
For further information, including links to online text, reader information, RSS feeds, CD cover or other formats (if available), please go to the LibriVox catalog page for this recording.

Uploaded by librivoxbooks on October 5, 2019