This study investigated into the effect of the Non cognitive Trait Self efficacy as a Predictor of Students' Academic Productivity in Anglo Saxon Universities in Cameroon. The mixed methods research design was used and the sample was made up of 443 postgraduate students of six faculties in the universities of Buea and Bamenda. In selecting respondents and study sites for the study, a multi stage sampling technique purposive, opportunity, simple random and stratified sampling technique was used. The instruments used for data collection was a closed ended questionnaire and a focus group discussion guide for students. The content validity index was 0.96 and the overall reliability of the instrument was 0.955. Data was analysed quantitatively and qualitatively and descriptive frequency counts, percentages and inferential statistics Chi Square were used to analyze quantitative data while qualitative data was analyzed using thematic analysis. Spearman rho test was used to establish the relationship between self efficacy and academic productivity of university students. The findings indicated that there was a significant, positive and strong relationship between self efficacy and academic productivity with P value 0.001, far 0.05. The positive sign of the correlation coefficient R=0.506 implied that academic productivity significantly increased with increase in self efficacy. Findings have implications for pedagogic practices as teachers need to establish a friendly relationship with their students and build these officious traits in this latter, since the study indicates that students with these skills enjoy, and engage, in learning effectively and perform highly in their educational tasks. This encourages the active implementation of the student centered approach to learning in which case the students' needs and interests are catered for, causing them to develop a sense of belonging, ownership and autonomy in their educational activities. Based on the findings, some recommendations were made to the effect that counselors should caution students, and enlighten them on the need to develop their self efficacy and as well as strengthen their belief that their performances can be improved upon. This will inject in the students an additional effort in their studies.
by Neba Vernat Neh "The Effect of the Non-Cognitive Trait; Self-Efficacy as a Predictor of Students' Academic Productivity in Anglo-Saxon Universities in Cameroon"
Published in International Journal of Trend in Scientific Research and Development (ijtsrd), ISSN: 2456-6470, Volume-3 | Issue-6 , October 2019,
URL: https://www.ijtsrd.com/papers/ijtsrd29307.pdf
Paper URL: https://www.ijtsrd.com/humanities-and-the-arts/education/29307/the-effect-of-the-non-cognitive-trait-self-efficacy-as-a-predictor-of-students'-academic-productivity-in-anglo-saxon-universities-in-cameroon/neba-vernat-neh

International Journal of Trend in Scientific Research and Development 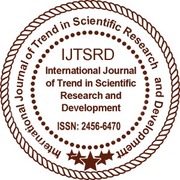 Uploaded by International Journal of Trend in Scientific Research and Development - IJTSRD on November 23, 2019