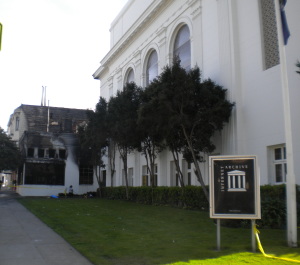 VICTORY FOR THE NET! Celebration On February 26, 2015, the FCC voted to protect real Net Neutrality, by restoring the agency's authority to protect Internet users under Title II of the Communications Act. Translation: a concrete victory in the fight to protect the Open Internet. The Internet Archive & Electronic Frontier Foundation & Free Press along with 15 co-hosts decided it was time to celebrate. Some 400 grassroots activists, policymakers, lawyers, technologists, librarians,...
Topics: Victory, Net Neutrality, Victory For the Net, EFF, Free Press, Internet Archive, FCC, Title II

B-Roll Footage (no sync'd sound) of the loading out of the book collection of the Rostad Library at Evangelical Seminary in Myerstown, PA. Loadout was overseen by Jordan Modell of the Internet Archive on July 14, 2020. Stillframes are all captures from the .MOV footage, included for reference; all shots are static-mounted shots (shaking stops after a few seconds due to use of a single-pole stand) using a Canon VIXIA HD camera by Jason Scott. There are no relevant audio sounds from the footage....

Second shots of the TT Scribe, with a focus on the cradle, foot pedal.
Topic: TTScribe

The BBC visited Internet Archive for a documentary they are producing. Here's some behind the scenes footage.
Topics: brewster kahle, internet archive, BBC