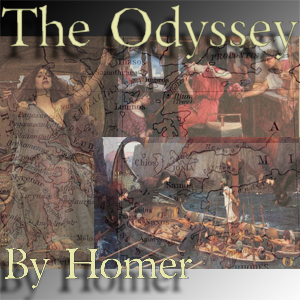 Librivox recording of The Odyssey, by Homer (transl. Samuel Butler).

The Odyssey is one of the two major ancient Greek epic poems (the other being the Iliad), attributed to the poet Homer. The poem is commonly dated to between 800 and 600 BC. The poem is, in part, a sequel to the Iliad, and concerns the events that befall the Greek hero Odysseus in his long journey back to his native land Ithaca after the fall of Troy.
It takes Odysseus ten years to return to his native land of Ithaca after ten years of war; during his 20-year absence, his son Telemachus and his wife Penelope must deal with a group of unruly suitors who have moved into Odysseus’ home to compete for Penelope’s hand in marriage, since most have assumed that Odysseus has died.
The poem is a fundamental text in the Western canon and continues to be read in both Homeric Greek and translations around the world.
(Summary from Wikipedia)

For further information, including links to online text, reader information, RSS feeds, CD cover or other formats or languages (if available), please go to the LibriVox catalog page for this recording.

For more free audiobooks, or to become a volunteer reader, please visit librivox.org.

Reviewer: librivoxbooks - - October 29, 2016
Subject: Jacob's reported error fixed
The M4B link for part 1 has been fixed. Thanks for the report, Jacob!

Reviewer: Timothy Ferguson - favoritefavoritefavoritefavoritefavorite - February 13, 2015
Subject: Brilliant
I thought I already knew this story, but was surprised by the fact that the tale I knew, which is basically the return home and the destruction of the suitors, is a tiny part of the narrative told mostly in flashback. There’s an awful lot of other stuff clustering around the cinematic bits of this story, and in learning about it, I came to enjoy the story far more deeply. Penelope is a fantastic character, for example, and if you know only the abridged version of this story, see seems very static and passive. In the full version of the story she’s a cunning actor, besieged but still holding out bravely while her resources for resistance crumble.

The book is well worth the read, or listen, even if you think you already know the story. You may need to be patient with the way the story is paced, however. It doesn’t follow modern conventions of storytelling, being originally for recitation, so it lacks some of the brevity and page-turning trickery of newer stories. I’d say this is broadly appealing, pacing aside.

This review was first posted on book coasters