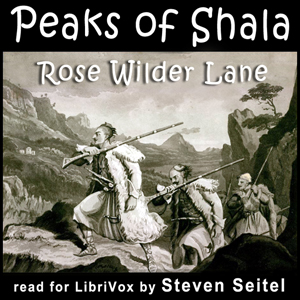 LibriVox recording of Peaks of Shala by Rose Wilder Lane.
Read in English by Steven Seitel
This book was published in 1923. From the author's own Introduction: "I would not have this book considered too seriously. It is not an attempt to untangle one thread in the Balkan snarl; it is not a study of primitive peoples; it is not a contribution to the world’s knowledge, and I hope no one will read it to improve the mind. It should be read as the adventures in it were lived, with a gayly inquiring mind, a taste for strange peoples and unknown trails, and a delight in the unexpected. Here I give you only what I saw, felt, and most casually learned while adventuring among the tribes in the interior northern Albanian mountains..."

Three brave American Zonyas (women) venture into the mountains of Northern Albania at a time not long after the Great War, when the boundaries (and even the right to exist) of the Balkan states were still hotly disputed. The author tells us why: "the people are living as they lived twenty centuries ago, before the Greek or the Roman or the Slav was ever known. There are prehistoric cities up there, old legends, songs, customs that no one knows anything about. No stranger’s ever even seen them."

What better reason to risk life, health, and limb?

(Summary by Steven Seitel)
For further information, including links to online text, reader information, RSS feeds, CD cover or other formats (if available), please go to the LibriVox catalog page for this recording.

Reviewer: msfry - favoritefavoritefavoritefavoritefavorite - April 10, 2022
Subject: Albania Travelogue?
This little book was so interesting! I can't get it out of my mind. I only picked it up because of the author's fame, but the intimate tour of this little know country which still lives as men did centuries ago, was a special treat! I thank Steven Seitel for bringing each chapter to life -- he and Rose were both good tour guides into the cultures and village life of this ancient people. 5 stars for a memorable armchair experience.