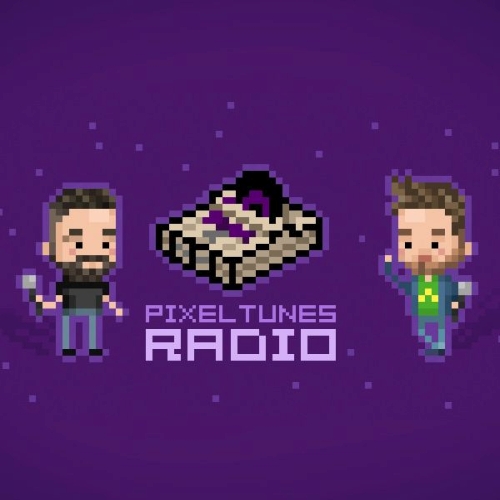 PixelTunes Radio was a video game music podcast that ran for 110 episodes between January 2014 and May 2018. It was hosted by Mike Levy and Ed Wilson, who are currently the respective hosts of XVGM Radio and The VGMbassy. This is a collection of every episode released, including every tune, every skit and sketch, and every joke they've ever cracked. Please enjoy!

Welcome to The VGMbassy! You're listening to a brand new podcast celebrating video games, video game music, and the online community of fans who love them. Each show will feature Ed Wilson (PixelTunes Radio, Impulse Project, Audio PanicRoom) and a rotating cast of guest host "VGMbassadors" who will share with us their gaming passions. Our first episode features Emily (The VGM Jukebox) and one of her favorite game series of all time: Ecco the Dolphin. Please join us as we explore the...
Topics: VGM, Video Game Music, Podcast, TheVGMbassy

Uncovering unique tracks has always been a PixelTunes Radio staple, but on episode 105, we're down-right hole punchy! Mike is joined by our guest co-host once again, Justin, as they go round robin on tracks with the always knowledgeable VGM aficionado himself, Niko AKA The Wii Guy! Listen on as the guys get weird and wonky with Looney Tunes, discuss the finer methods of cheese and pickle based weaponry, and baste themselves in the longest track to date in PixelTunes history! With tons of humor...
Topics: VGM, podcast, pixeltunes

Ed and Mike start out the "Second Century" of PixelTunes Radio with a fantastic batch of free-pick music. As is usually the case with these shows, there's a little bit of something for everyone, from speedy metal to groovy FM synth. Enjoy!
Topics: pixeltunes, vgm, podcast

Mike and Ed celebrate 100 episodes of PixelTunes Radio in this very special podcast featuring guest appearances, all-time favorite VGM tracks, and directors' commentary on memorable skits. Learn what goes on behind-the-scenes during PTR production, and celebrate with the guys as they venture into the 100's and beyond!
Topics: vgm, podcast, pixeltunes radio

With soundtracks like Puggsy, Wiz 'n Liz, and Alien 3 to his name, composer Matt Furniss has been recognized as one of the most unique and talented musicians to grace the Sega Genesis. On this very special episode of PixelTunes Radio, Mike and Ed sit down with Matt himself to talk about his career, his music, and the technology behind his compositions! The PTR guys have chosen a few tracks of his that you may not be too aware of, while Mr. Furniss brings down the house with a few ending themes...
Topics: PixelTunes Radio, VGM, podcast, Matt Furniss

It's the PixelTunes Radio 3rd Anniversary Celebration! To kick off the next year of the show, Mike and Ed have taken VGM submissions from fans and friends and compiled one heck of a podcast! Keep an ear out for familiar names from PTR's past, including hosts from other VGM shows and previous guest hosts!
Topics: vgm, podcast, pixeltunes

It's the most wonderful time of the year again! PixelTunes Radio is back for their 3rd annual winter special, sharing some songs that remind Mike and Ed of of the frosty weather and holiday season.
Topics: vgm, podcast, pixeltunes

PTR's spoooooky October festivities continue with a focus on one of the most disturbing series of the last decade: Silent Hill. Jared Smith from the YouTube channel Avalanche Reviews joins Mike and Ed for an in-depth look at the music from the games, composed by Konami and Grasshopper Manufacture composer Akira Yamaoka.   Learn about the mythos behind the eponymous town! Find out what the games share in common with television series Stranger Things!  And listen to Mike rant about Resident...
Topics: silent hill, akira yamaoka, ptr, podcast, vgm, konami

Today's theme is all about running and gunning as Mike and Ed grab their rocket launchers and head towards the enemy's base. The playlist is exceptionally rockin' this time around, with hits from Turrican, Metal Slug, and... Lilo and Stitch? Hmm. Join us for an amazing VGM journey!
Topics: ptr, pixeltunes radio, vgm, run and gun, metal slug, turrican

Shoot! Dive! Kick! Run! Mike and Ed swing for the fences in this super-sporty episode of PixelTunes Radio.  Jam to a bunch of classic tracks from names like Koji Kondo and Jeroen Tel, and score some extra VGM knowledge with the some of the more obscure titles!  Whether you're a mega fan, or just a casual spectator, this episode has a little something for everyone.
Topics: podcast, vgm, sports, jeroen tel, koji kondo

You loved our last "Same Song, Different System" episode, so we're back with more awesome tunes from multi-platform games! Mike and Ed debate their favorite versions of tracks from Golden Axe, Zero Wing, and more, while giving you the scoop on which system got the best port! Also, we're announcing our first listener request episode! Listen to the show to see how you can share your favorite video game music with our listeners!
Topics: VGM, Video Game Music, PixelTunes Radio

Mike and Ed are huge fans of YouTuber Matt Ezero, also known as "Cygnus Destroyer" or "The LJN Defender." He's been creating amazing retro game reviews for the past few years, and he specializes in finding the good qualities in games that have been given a bad rap by other reviewers.  In this episode, Matt joins the PTR guys and brings along his own music, too! We hope you enjoy this strictly retro episode of PixelTunes Radio!
Topics: PixelTunes, VGM, Video Game Music

This episode, Bad Dudes Mike and Ed talk about ports and remakes, and pick out a few of their favorite titles that made it onto multiple systems.  How did Space Harrier's amazing arcade music sound on the Sega Master System?  Did the SNES version of Earthworm Jim sound as good as it's Genesis counterpart?  We spin the same song from different consoles, compare and contrast them, and pick their favorite versions!  Which tracks do you like best?  Let us know in the comments!
Topics: PixelTunes, Ys, Bad Dudes, Nintendo, Sega, Arcade, Earthworm Jim, Gradius

The beautiful bounty hunter Samus Aran humbly began her Metroid-hunting career in 1986 on the NES.  Thanks to its unique atmosphere, riveting gameplay, and Hirokazu Tanaka's iconic score, it became a sensation, spawning numerous sequels and spinoffs over the course of three decades.  The PTR guys join up with special guest Todd and talk about their favorite moments from the series, and play some tracks from the games too!
Topics: Metroid, PixelTunes Radio, VGM, Podcast, Video Games

We're marking our one year anniversary with a free-pick party!  Mike and Ed roll out songs from some of their favorite game soundtracks, and chat about their favorite moments from PTR's first year on the internet.  Jam out to Maniac Mansion, Phoenix Wright: Ace Attorney, and more as the guys look forward to many more years of awesome VGM!
Topics: PixelTunes Radio, VGM, Podcast, Video Game Music

If you’ve searched for NES soundtracks on YouTube before, chances are you’ve listened to one of WiiGuy’s uploads.  Just who IS the guy behind “WiiGuy?”  Find out on this episode of PixelTunes Radio! Niko (aka WiiGuy) shares ten of his favorite NES tracks with us, some of which are new to the PTR boys.  It’s an 8-bit extravaganza featuring retro superstar composers like the Follin brothers, Neil Baldwin, and Alberto Gonzalez!
Topics: vgm, video game music

PixelTunes Radio is a bi-monthly hour-long podcast hosted by  Mike Levy  and  Ed Wilson .  We love video game music, and bring you a collection of the best songs ever to come out of a console.  You’ll learn tons of interesting factoids about your favorite games along the way, and laugh along with our hilarious spoof commercials that take place inside of video game worlds.  Come laugh, learn, and listen with us!
Topics: vgm, video game music, podcast

DESCRIPTION
PixelTunes Radio was a video game music podcast that ran for 110 episodes between January 2014 and May 2018. It was hosted by Mike Levy and Ed Wilson, who are currently the respective hosts of XVGM Radio and The VGMbassy. This is a collection of every episode released, including every tune, every skit and sketch, and every joke they've ever cracked. Please enjoy!
ACTIVITY