Rail Travel Newsletter, (later published as "Rail Travel News"), independent periodical journal published from late 1970 until mid-2004.   It covered the end of the era of passenger trains run by individual U.S. railroad corporations, and the advent of Amtrak, the government-sponsored national system, starting in 1971.  Various issues in this collection, as available to date, approx. half of the full press run.  Pretty much complete from issue #1 to ~#300 in the middle of 1984, and spotty after that.  Will likely be expanded slightly in the future, as additional issues are tracked down.  Publication schedule was theoretically approx. every 2 weeks but it varied.  Pub. covered passenger trains & services primarily in the U.S. but also had articles re: Canadian & European services as well.  There is a database of the contents, by issue and page, as well as a more detailed "Introduction" article which will tell you more about the history of the publication and this preservation project.  RTN (as it was often called) was always printed rather inexpensively, so the quality of the text and (esp.) images varied widely.  This description is as of:  2022-05-22 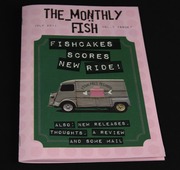