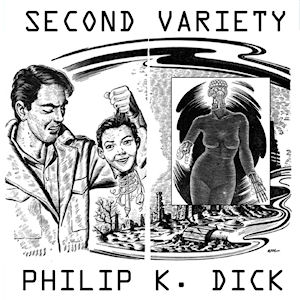 Early victories by the USSR in a global nuclear war cause the United Nations government to retreat to the moon leaving behind troops and fierce autonomous robots called “Claws”, which reproduce and redesign themselves in unmanned subterranean factories. After six bloody years of conflict the Soviets call for an urgent conference and UN Major Joseph Hendricks sets out to meet them. Along the way he will discover what the Claws have been up to, and it isn’t good… - Second Variety was first published in the May 1953 edition of Space Science Fiction Magazine. (Summary by Gregg Margarite)

Reviewer: KrispyKraft - favoritefavoritefavoritefavorite - February 24, 2022
Subject: Dick never gets old (he he he)
Another Dick masterpiece, Dick is the best...
Combine that with the reading style of Gregg Maggarite and you get a well rounded story with plenty of depth that is easy listening.
Ha haha ha.
It is another one of PKD's great works - all jokes aside, if you like Sci-Fi, you'll like this one.