Sermons of a Buddhist Abbot 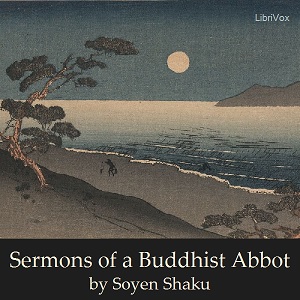 Sermons of a Buddhist Abbot

LibriVox recording of Sermons of a Buddhist Abbot by Soyen Shaku. (Translated by Daisetz Suzuki.)
Read in English by Jendia; Mike Pelton; Jacki Horn; csheeler; William Gavula
Look! it's the science of sitting, No! it's the science of meditating, No! it's Zen. If you wanted to know anything regarding Zen Buddhism and you did not have the opportunity then here is your chance to listen to the wisdom of a Zen Buddhist Abbot who toured the United States in 1905-6 and most of the sections in this book were lectures that were given to the American Audience, which is why this work is nicknamed as "Zen for Americans."

"The Zen that can be explained is not the Zen" said the second patriarch to Bodhi Dharma but this book tries to explain the basic principles that can help you get started on the journey of experiencing Zen. Some of the essays in this book were used as a reference by Leo Tolstoy in one of his works. (Summary by sidhu177)
For further information, including links to online text, reader information, RSS feeds, CD cover or other formats (if available), please go to the LibriVox catalog page for this recording.

Uploaded by librivoxbooks on October 17, 2013