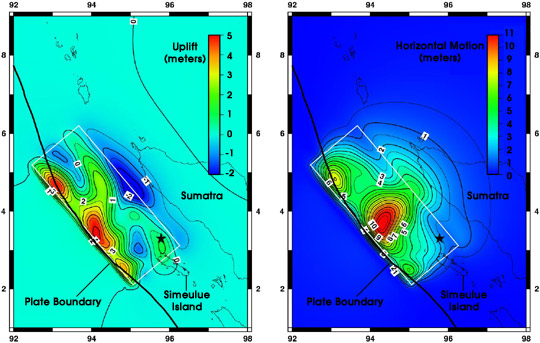 Topics
What -- Earth, Where -- California

Large earthquakes often cause permanent movement of the Earth's surface, a result of the motion that occurs deep underground. The tsunamis spawned by the magnitude 9.0 earthquake on December 26, 2004, were the result of motions of the sea floor above the earthquake fault. Seismic measurements and computer models show that the Burma Plate slipped up to 20 meters (66 feet) at the location of the earthquake, 18 kilometers underground. The sea floor above moved less, up to 5 meters (16 feet) vertically and 11 meters (36 feet) horizontally.

The maps above show estimates of how much the Earth moved as a result of the quake. These calculations are the result of a computer simulation that was based on data from a global network of seismic instruments. A black star marks the earthquake epicenter.

On the left is vertical displacement, or uplift. Positive values (red, yellow, and green) show areas that rose during the earthquake, and negative values (blue) show regions that dropped. The maximum rise, along the subduction zone where the Burma Plate is moving over the India Plate, was over 5 meters (16 feet). Along the western edge of Sumatra, the calculations predict the land dropped a maximum of one meter (3.3 feet). This may have moved portions of the coastline permanently below sea level.

On the right is horizontal motion. The greatest motion on the sea floor was 11 meters (36 feet). The coast of Sumatra moved as much as 3 meters (9.8 feet), and the north end of Simeulue Island moved 2 meters (6.6 feet).

Geologists hope to use remote sensing data, combined with on-site GPS measurements, to evaluate the motion predicted by these computer models.